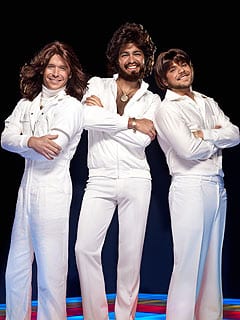 The boys of “Entourage” have engaged in a playful media battle over a very conspicuous bulge in a recent photo of Adrian Grenier, “People” reported.

The photo in question is of Grenier (Vincent Chase) and co-stars Kevin Connolly (Eric) and Jerry Ferrara (Turtle) posing as the Bee Gees for “People” magazine’s Hottest Bachelors issue. Connolly was a guest on “The Tonight Show” on Tuesday, and told Conan O’Brien and the audience that the large bulge in Grenier’s pants was nothing more than a sock.

“Adrian put a sock (in his pants) “¦ When he was doing it, I said “ËœWhat are you doing?’ and he said “ËœIt’s what they did in the ’70s.” I didn’t know that. And the photographer’s like ‘Adrian, we’ve got to lose one of the socks,'” Connolly recounted. “And all of sudden when the photo came out I’m getting calls from girlfriends of mine, like ‘So, Adrian”¦’ And I didn’t want to throw him under the bus with the individual girls. I figured I’d wait until I got here on ‘The Tonight Show.'”

All in good fun, Grenier retaliated (without ever confirming or denying the sock-stuffing allegation) at the season six premier party for “Entourage.” He told “People, “”My question is: how would HE know? What was he doing looking? And why was Conan looking, too? It’s weird! I’ve never scrutinized another man’s groin area in my entire life “" or his socks, for that matter.”

Even Kevin Dillon (Johnny Drama), who was not in the photo shoot, had something to say: “I was like ‘What, do you have a sock in there?’ And he actually DID “" I had no idea! I said it jokingly.”

Underneath the joking though, we’re all still wondering. Is the bulge real or fake? Ladies, take some time to ponder before you go chasing down Grenier.