Let’s get this out of the way right now: if you like the original Excitebike, the NES version from long ago, then you’re going to love Excitebike: World Rally. It’s the same game, only now with better graphics, an updated art style that fits developer Monster Games’ other two Excite efforts, enhanced controls and–wait for it–online play. The main question is whether or not it’s worth the extra $5 to pick up World Rally when the original is available on Virtual Console–as someone who had the classic version prior to this game’s release, I can tell you that it’s worth throwing the money down to have both versions.

Excitebike is an arcade style title. You drive on your bike, racing against your own time in order to earn a better grade. You spend your time popping wheelies, using your turbo boost, hitting jumps, avoiding pits, jumping hurdles, flying ahead of other racers–World Rally feels like the original in that sense, but tighter and more responsive. There are 16 courses where you switch lanes, hit boosters and jump over hills, and they are progressively harder. You may think you rock at Excitebike after you drive through the first few courses, but once you get to the Gold and Platinum cups, the game will let you know what it thinks of you. In order to earn the best grades possible on those levels, you’re going to need to hit every jump the right way, hit all of the markers to cool off your boosters, and avoid crashing at all costs–it’s a lot harder to do than it sounds.

World Rally also brings you back to the days when all you needed to have fun with any game was two buttons–2 is accelerate, 1 is your limited turbo supply, and the D-pad is used to switch lanes and perform a wheelie. You also use the D-pad to align your bike for landings so as not to interrupt your speed. That’s the classic style though, as you can use the updated version that lets you tilt the Wii Remote in order to align yourself. Both work, and work well, but I eventually went back to the D-pad to avoid accidentally shifting in mid-air. 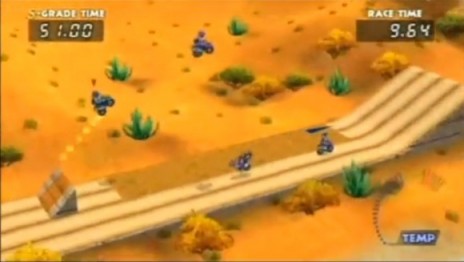 The other racers on the course are there mostly to get in your way, as you aren’t actually racing them. You can bounce off of their heads as you come down from a jump in order to cool off your engine, and you can also take them out of commission by switching lanes directly in front of them at the exact right moment–be careful though, as crashing will ruin your times, though you can get back up from that and from your engine overheating more quickly than before thanks to shaking of the Wii Remote, just like in Excitebots or Excitetruck.

Completing all of the courses with a grade of S in a particular cup (B is passing, A is obviously better, and S is the best) earns you a few different colored bikes. Their performances are all the same, but if you’re not digging the original colors or just want a change of pace, they are your reward for a race well run.

The track editor from the original game returns, but there’s a twist now, as you can trade levels with your friends. No longer do you have to rely on your own imagination in order to have more fun than what came in the virtual box, which is appreciated.

Graphically, the game is 3D now, but it’s a fairly simple 3D. The art style is more impressive, as the courses actually resemble the areas they are based in now, like in Excitebots, rather than simply being listed by letters for differentiation. Another update Monster Games snuck in was the ability to alter courses by hitting items, creating jumps and hills where nothing was a moment before simply by driving into them. Little things like that go a long way towards enhancing the experience and making this the superior product.

The most significant addition is online play though. Once you’ve mastered taking on the AI, try taking someone on online and see how well you fare–you may be surprised at just how good people are at Excitebike. My one complaint about multiplayer is the fact that there is no local play–sure, the original didn’t have it either, but if you’re going to include online, then it seems natural to have split-screen for those of us who maybe just want to rub our friend’s noses in our superiority face-to-face rather than through a headset or silently, like many online games.

Blast Factor: Your first thought may have been, “$10? Really?” but Monster Games packed this WiiWare sequel full of value that easily trumps what the original offers. The updates to the graphics, controls, and track editor, as well as the addition of online play make Excitebike: World Rally a must-own for fans of the series, and gives Monster Games its second Excite winner of the year.

Excitebike: World Rally is available exclusively on the Nintendo Wii’s WiiWare service, and will cost $10 or 1000 Nintendo Points. A copy of this game was purchased for the purposes of this review.