Admit it, you still toss a Super Mario Bros. cartridge into your NES every now and then or boot up Super Mario World on your Wii thanks to the wonders of Virtual Console. These timeless classics have wowed gamers and brought a smile to the face of millions over the years, but there has not been a true sequel to the 2D Super Mario universe on a home console for over 15 years. Mario’s move and success to the world of 3D–Super Mario 64 is the blueprint from which all 3D platformers were developed and judged after–killed the 2D Mario platformer, at least outside of handhelds. Thankfully, Nintendo is revisiting the past using the technology and knowledge of today to create a brand new 2D Mario title, one that combines all of the things Nintendo has utilized and learned throughout their years as the most successful 2D platform developer in the world, and brings them together in one game–and then lets you play that game cooperatively with your friends.

Outside of the fact that this is a Mario game in the classic style, that’s the big hook. You can play this game along with up to three others, all at the same time. It’s total chaos on occasion, but it’s also some of the most fun I’ve had playing a game in a long time. You can work together in the story mode, grabbing every coin, assisting your friend’s jumps, not rushing through the level so that your slower friends can keep up, but don’t worry, there’s also room for the more competitive side. New Super Mario Bros. Wii offers two competitive multiplayer modes that work so well that I’m almost retroactively upset the older games didn’t include them.

Graphically, New Super Mario Bros. Wii looks fine, but it’s not a stunner like some of 2009’s other sidescrolling efforts, like Muramasa or A Boy and His Blob, or even Nintendo’s own Wario Land: Shake It. You won’t notice though, because you’ll be too busy running around trying to collect every coin, find every hidden room, or if you’re playing with friends, just trying to stay alive and out of harm’s way. 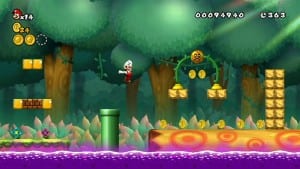 This is classic Mario platforming: run, jump, collect item suits, use suits’ abilities. You’ve got the old standby suits, such as the Fire Flower and the Mushroom that makes Mario grow, but in addition there are some new suits. The Penguin suit allows Mario to shoot ice balls that freeze enemies (that he can then climb or throw like a shell) while also giving him the ability to slide on ice and swim effectively, while the Propeller suit lets Mario fly–unlike the Raccoon tail or Cape though, this is more vertical than horizontal. Flying horizontally at fast speeds would result in the death of everyone without that power, so it’s a logical design choice to eliminate those powers.

The level design is on par with Mario’s peak as a 2D platformer, during the Super Mario Bros. 3/Mario World phase, where loads of enemies, platforms, pipes and difficult jumps were placed everywhere for you to navigate. You can already tell that this is a game you can replay again and again, and you will find something new all of the time, whether it be hidden coins, hidden boxes, rooms, ways to clear jumps or dispose of your enemies–there are multiple ways to do everything, and that sense of exploring the game will keep you enthralled with the title. 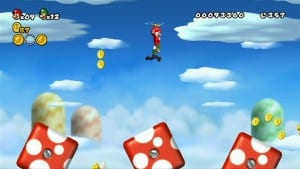 The fact that you can replay the levels in multiple modes makes finding secrets easier too. As stated, you’ve got your cooperative story mode. Besides that though, you have Coin Battle, which gives you somewhat of an alternate version of the game’s levels that are littered with coins. There’s no counter for individual coins as you play, just the team’s total, so you aren’t quite sure who is in the lead, which makes every coin matter. When you finish the level, you see your total and your champion; the game will also keep track of how many levels you have won if you play more than one round, so you could replay the whole game this way and check out the splits afterward.

The other mode is the aptly-named Free For All. This is Mario Bros. Wii at its most chaotic, as four people battle it out to see who can score the most points. Extra lives are worth points, coins are worth points, and of course, killing enemies and collecting items are both worth points as well. You are ranked at the end of each level, and just like Coin Battle, can play every level you have unlocked in the story mode this way. Depending on how close you and your friends are, this is either the greatest game mode you can imagine or the quickest way to get yourself punched in the face. There is nothing quite like the look of death you receive for using someone else’s head to propel yourself to an item, and then finding out that your makeshift trampoline pal fell into a canyon and died because of it. At the same time though, it’s worth that glare for the laughs. 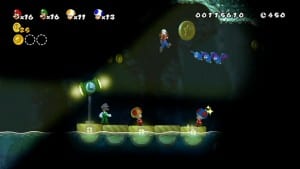 And that’s why you won’t hear me complain about the lack of online play in this game. Sure, it would have been nice for some, and more modes are always welcome, but as LittleBigPlanet taught me, the most enjoyable experiences come from booting up the game and playing with people in your living room. The laughter is louder, and the experience is more enjoyable. You may disagree with me, but you can adjust your own personal score accordingly–just know that, online or no, this game is a must-own.