After the success the casual segment of the gaming world has seen this generation, it’s difficult to believe that just 10 years ago the space was still getting its legs. Pogo.com, which just celebrated its 10-year anniversary yesterday, had just undergone a name change and was headed in a brand new direction. Their immediate and subsequent success has helped pave the way for a variety of other casual online outlets, and has helped the casual sector both improve and expand on home consoles thanks to the market it helped create.

Pogo.com wasn’t always known for its casual offerings”"before it was even Pogo, it was Total Entertainment Network (TEN), and that outlet focused more on the hardcore in this pre-online console world. “The site focused on connecting hardcore gamers to each other online. We had games like Quake and‚ Command & Conquer. Then companies started to include online functionality in their games and we were in a situation where we knew we’d be obsolete eventually” says Mike Riccio, the current VP and chief technology officer of Pogo.com. Riccio has been there since the beginning, so he’s seen all of the changes and why they were necessary. 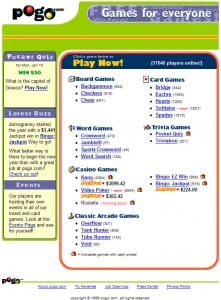 Pogo's homepage has come a long way in 10 years

Before they were knocked out of the picture by the online improvements to home consoles, Riccio and co. switched TEN to Pogo.com, and became an outlet for casual gaming. “Web portals were driving revenue through advertising, and online games were one way for them to engage consumers. We built a new team to develop casual online games, partnered with portals to provide them with gaming content, changed our name to Pogo.com, and launched our own destination site.‚ ” There was no other site on the Internet that gave itself over completely to casual online gaming at this point, so Pogo was taking a chance with the switch, but as Riccio stated, it was a necessary one to ensure the company lived on as the rest of the gaming world improved.

As stated, the industry today is much different than it was 10 years ago. Whereas today you cannot avoid seeing the call to the casuals everywhere”"from free-to-play games to other websites that have followed in Pogo’s footsteps to home consoles that have made both hardware and software killings this generation due to their ever-increasing casual user base”"when Pogo began, they were filling a hole in the market. “Yahoo and MSN had some basic online games” says Riccio, but thanks to Pogo and its ilk “Today millions of people are playing games on sites that have hundreds of games that you can play online or download.” It’s gotten to the point where the terms “core” and “casual” are thrown around constantly by gamers and journalists alike, many times in a derogatory fashion. Regardless of the complaints, you have to admit that casual games have helped keep the industry afloat in the same way that established, “core” franchises have. Riccio tells us that “casual games are being taken seriously and are seen as a viable business.” While this has been true online for a bit, it’s a more recent development with the home console market; Nintendo’s “blue ocean” strategy fits in with Riccio’s point snugly.

It’s not just the games that have brought Pogo success, though titles like Poppit, Word Whomp (Riccio’s personal favorite) and First-Class Solitaire have been and remain some of the most popular online games around, helping keep Pogo.com in its place as the stickiest website around. ‚ It’s the community aspect of Pogo that makes people come back to play again. Riccio says that Pogo has a saying, “People come for the games and stay for the community. We make games that can be fun in five minutes if you need a quick break or five hours if you’re meeting up with your friends to chat and play.” While the community is mainly a great way for friends to catch up, there have been other benefits found. For instance, there have been over 250 marriages that came about due to a couple meeting at Pogo.com. While maybe that’s not enough to start working it in to Pogo’s company slogan, it’s an indication of just how addicting some of these games can be, and how Pogo makes it easy for people to keep in touch and play together.

Pogo was purchased by EA back in 2001, and has since then filled much more than just an online niche. Besides being the stickiest destination on the web, Pogo has expanded into downloadable titles and the mobile sector. Pogo To Go allows users to play these previously online only titles offline, and the mobile versions of games are self-explanatory. The site continues to grow as well”"whereas in 2001, at the time of the EA acquisition, Pogo had 17 millions different users, it now claims to have 15 million active users. There’s a big difference between total users and active ones, and 15 million active is a big deal, especially with all of the other choices that are available to the consumer today compared to 2001 or when the site launched.

Advertising still powers the Pogo.com machine, but like many other in the industry, micro transactions are the future. They have existed on Pogo since 2006, and as many free-to-play games across the industry have proven, they are a great way to pull in revenue and keep your most casual and more “core” casual gamer interested and coming back for more. EA has even utilized some of what has been learned through the casual space in their more hardcore offerings, with games like BattleForge moving to free-to-play but with downloadable, paid for in-game items.

Riccio and Pogo are still looking for new ways to bring gamers to the games, or, as Riccio puts it when asked about the future of Pogo, “the games will come to the players be it online, on their cell phone or any other way that hasn’t been discovered yet.” With 10 years behind them, based on how Pogo.com has adjusted to the market and continued to grow during that time, it should be no surprise that they are thinking about how to position themselves for success for the next 10 years.