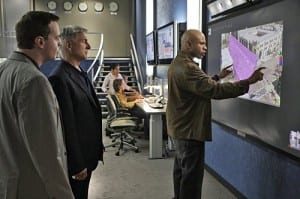 “NCIS” is going the way of “Law and Order,” or so CBS hopes. The show began as a spin-off to “J.A.G.,” and now it’s getting a spin-off of its own. Both “NCIS” and “NCIS: Los Angeles” premiere tonight at 8 p.m. and 9 p.m. respectively. “Los Angeles” starts LL Cool J and Chris O’Donnell.

These are two that we’re excited about since the finale in the sixth season left us with a cliff hanger for the ages. Plus, the two-hour spin-off into “Los Angeles” that occurred toward the end of last season left us wanting more, and it gave us another cliff hanger whereby one of the main characters was the victim of a drive-by shooting.

CBS also has “The Good Wife” premiering at 10 p.m, competing with ABC’s premiere of “The Forgotten.”

Two finales to keep in mind tonight: SyFy ends the season “Warehouse 13” tonight at 9 p.m., and Discovery Channel reality show “The Colony” has its finale at 10.

FOX announced Monday that it has given “Glee” the thumbs up, ordering a full season of the new comedy. It’s the first new show of the fall TV watching season to get picked up for the full season.

Reality network MTV is moving “The Hills” to 10 p.m., and putting “The City” at 10:30 starting September 29, which is also the premiere date for season five of “The Hills.” MTV has also said that a new season of “The Real World/Road Rules Challenge” called “The Ruins” will open September 30 at 10 p.m. This season is set in Thailand.