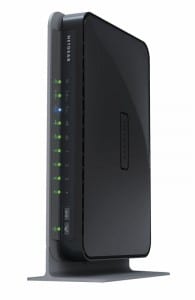 Netgear announced September 1 that its new RangeMax Dual-band Wireless N gigabit router is now be available. The new device is packed with features relevant to those with high bandwidth needs “" which is really all of us.

Most notable is ReadyShare, which allows high-speed access to a USB hard drive from any device on the network. The RangeMax also comes equipped with a 680Mhz MIPS processor, one of the latest processors on consumer routers today. The router is also capable of simultaneous dual band activity using both the 2.4Ghz and the 5Ghz bands. This allows for a real world throughput of 350mbps, which is faster than most competing products.

This device is also functional as a plug and play media server for an Xbox360 or PS3 using the integrated DLNA functionality. The RangeMax Dual Band Wireless-N Gigabit Router features Quality of Service algorithms that enable seamless streaming of HD video over Wi-Fi, usually a frustrating experience for anyone who’s ever tried. These algorithms also allow support for a number of simultaneous high bandwidth connections and also enable lag-free online gaming.

The router also comes with a built in broadband usage meter, useful for those dealing with those god-awful bandwidth caps. The built in gigabit Ethernet ports are capable of 500 mbps speeds “" more than twice the speed of competing routers.

Netgear’s RangeMax Dual Band Wireless-N Gigabit Router is now available worldwide for $189.99 with 24/7 tech support and a one-year warranty. This appears to be the first relatively solid competitor to Apple’s Airport Extreme with a reasonable price tag.