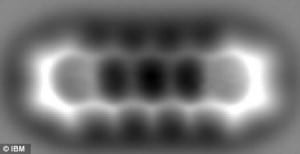 Scientists have managed to do something thought impossible. Even though that actually happens every day because that’s kind of the point of science. Nevertheless, scientists at IBM have managed to produce an image of a single molecule.

Even though microscopes come in many different forms, they all work via the same premise. Light microscopes use light waves, electron microscopes use waves of electrons. Specimens reflect those waves, which our eye perceives or computers interpret. All waves have a certain wavelength, or size. Anything smaller than that wavelength is unable to reflect the wave back, just like how waves at the beach continue to wash past you when you’re standing alone, but a sea wall will stop them in their tracks. 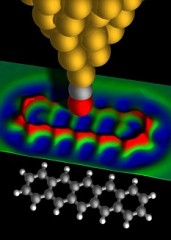 Diagram of how atomic force microscopy forms its images.

Simple compounds, like the molecule of pentacene that the group at IBM imaged, are much smaller than any wavelengths of light we can currently use to image them. Pentacene is about 0.7 nanometers across; a typical grain of sand is about 2,000,000 nanometers across.

The scientists used an “atomic-force microscope” which uses what is essentially a ridiculously tiny tuning fork with a single molecule of carbon monoxide at the end to poke at the molecule. The tuning fork returns different vibrations above the atoms of the molecule than above the surface the molecule was on. To eliminate any stray gas molecules or vibrations from interfering with the measurements, the experiment was performed in a vacuum at -450 degrees.

The resulting image actually shows the structure, including the carbon and hydrogen atoms of the molecule. The scientists hope to further refine the technique, where it will prove very useful in the further development of nanotechnology.