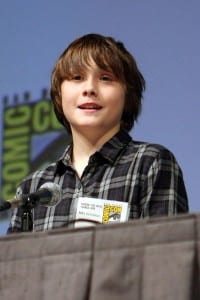 It was easy for Max Records to win the audience over, after he said he wrote down his speech on his hand.

SAN DIEGO — Spike Jonze’s current project, an adaptation of Maurice Sendak’s “Where the Wild Things Are,” is set for release early next year. He has serious material to work with.

The book originally caused an uproar when released in 1963 for its demonstration of rage being a part of children’s nature and growth. Some religious groups perceived the central character “Max” as depicting humans as animals — Darwinism. But readers fell in love with the book, which received the Caldecott Medal given by the American Library Association for the most distinguished American picture book for children.

Decades later, this book has settled comfortably into the role of beloved children’s classic. Now it’s up to Jonze, who appeared in a behind-the-scenes feature at this year’s Comic-Con International, to use his creativity to put “Where the Wild Things Are” on film.

In the convention featurette, Jonze demonstrates how the film was made and how he first got Sendak’s blessing to proceed with the production.

Jonze made it clear he did not want to produce a film which would tarnish the vision and scope of the classic. Audiences are also given a look into the life of Sendak.

The “Where the Wild Things Are” panel also featured a guest appearance of the actor who plays Max, the aptly named Max Record.

“This is the first time I have ever been to one of these things,” Records said at the panel, “so I wrote down what I wanted to say on my hand.” The audience immediately became smitten by the shy yet undaunted actor as a series of clips and the movie’s official trailer were played.

The film is first and foremost a surreal live action replica of the books. Jonze spared no creative or monetary expense in detailing the creatures’ costumes, as well as Max’s infamous pajamas. The scope of the production design is amazing, and it leaves one certain that, had this been made as an animated feature, it would surely be less impressive.

What makes this film such an amazing compliment to the literature is the immediate impression that the film will not candy-coat themes usually associated with coming of age films.

The film also stars Catherine Keener as Max’s mother who, through her brief scenes in the trailer, demonstrates the poignant moments as she tucks him in bed.

There is a poignant moment in one of the clips where Max explains “the death of the sun” to one of the creatures, much to the creature’s surprise. The exchange underlines the serious aspects of the film as Max shows his naivety toward the difference between being good and bad — how he is a biter and it got him in trouble. Records’ eyes and expression hanker back to another child star whose charisma pierced the screen with an immense vulnerability — the late River Phoenix, whose “Stand By Me” performance forever drew audiences to him.

“Where the Wild Things Are” is not going to easily be defined as a children’s film. In fact, it could easily be categorized as a PG-13 movie for its complex issues and themes. Fans of the books will love the translation, especially with Sendak’s approving nod and the way Jonze has used his own vision to bring this classic to the screen.