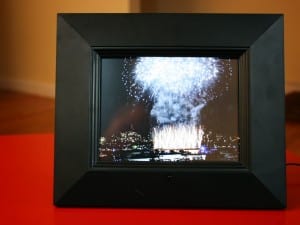 Digital picture frames fit into an awkward part of the technological landscape. On one hand, they’re certainly the next evolution of the standard wooden frame “" why only display one picture when you have thousands waiting to be seen on your computer? On the other, they’re almost backwards thinking “" in a worlds where every decide you have does many things, they’re like a really small computer monitor, except less useful, because they only display pictures.

Sungale has released the ID800WT in hopes of mitigating this discrepancy by loading the frame with a Wi-Fi card and touch screen, meaning the device can access current weather and forecasts, your stock information, internet radio and YouTube if you hook it up to external speakers, and even your Gmail, all on top of displaying a rotating slideshow of your pictures. Most of the widgets worked as promised; the news reader loaded the stories from Google News or Yahoo! News, and while the font was the most legible, this was really nifty. Unfortunately though, I found the YouTube widget frequently froze the device when I tried to load a video. 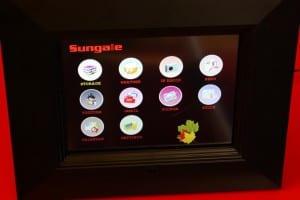 The available widgets on the home screen of the ID800WT.

The transitions available were standard, and maybe it’s just the fact that I enjoy the clean Mac aesthetic, but I feel like they were a bit dated. The “card stacking” and “bloom” transitions ceased to be cool with Powerpoint 97. Personally, I think it’s time for more grown up transitions.

One of the really cool features is the ability of the device to link to your online Picasa albums. If you have them set to sync from your computer to Picasa, then the device can then sync them to its onboard memory, obviating the need for cords. That being said, if old school is more your style, the device showed up on my Mac as an external flash drive without any fuss, and all I had to do was drag and drop the photos I wanted. You can even keep them organized by folder, and the frame intelligently displays photos from within the folders, making it easy to swap “albums” in and out. The half-gig of on board memory is actually rather roomy, especially if you crop your photos down to the 800 x 600 resolution of the screen, which is simple in a free editor like Picasa. 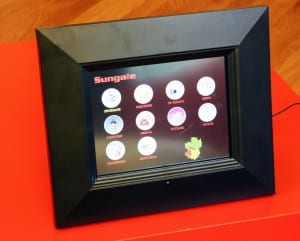 The home screen of the ID800WT.

The frame itself is matte black plastic, and while it’s won’t exactly win any award in the design department, it’s certainly good enough to fit a standard dƒ©cor, and isn’t ugly by any stretch of the imagination. The screen is bright and clear, minus all the fingerprints from being a touch screen. However, the inclusion of a soft screen wipe is definitely thoughtful. Obviously it’s hard to photograph a bright screen correctly in a photo like this, so you should just take my word for it. The screen itself has an 800 x 600 resolution, which is very high for a screen this size “" think back to the 90’s when your 13.1″ CRT monitor had the same resolution. The touch-screen was nowhere near as responsive as, say, an iPhone “" typing in my email password was particularly frustrating. I tried to use the on-board file explorer to arrange the photos, but I decided that it was easier just to plug it in and do so from Finder.

The fact that your device can do all of these things certainly gives it a leg up over your standard digital picture frame, assuming you have a solid Wi-Fi connection “" and this is where the frame failed me. The Wi-Fi connection was extremely flaky, to the point where I couldn’t sit on my couch fifteen feet away from my router. The only time I got a semi-decent connection was when I put the frame directly on top of the router, but even then it gave out, and I frequently had to remind the device to connect to my network.

The solution turned out to be to turn off my router’s security. While this may work on occasion, I’m clearly not going to be broadcasting an unencrypted network all the time in my crowded neighborhood, which means the device loses a lot of it’s “always on” potential if I have to change my router settings every time I want to use the weather, traffic, or email widgets. Another minor quibble is that I think the power cord actually isn’t long enough. If you wanted to hang it on a wall, you’d likely be limited to hanging it directly above an outlet, or running a rather unsightly extension cord. 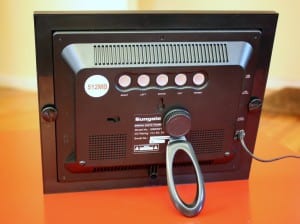 I can’t help but feel like all the pieces are in place for the ID800WT to be an amazing device “" it ‚ just falters on the execution. As a digital picture frame, the device performs near flawlessly, as it should. The widgets however are just too clunkily implemented to be truly useful. The makers should look toward a device like the Chumby, which has a small touch screen and cycles through photos and widgets much the same way, but with a much more svelte implementation. Of course the Chumby is itself rather chucky by nature “" you won’t be hanging one of them on a wall anytime soon. What we all truly need is a love child of the two.