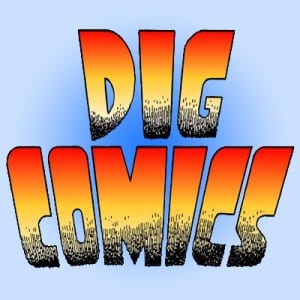 This lack of financial recognition of one of the most original forms of American entertainment has caused film veteran and Newbury native Miguel Cima to create “Dig Comics” a 15 minute call to arms to comic fans to bring the ink and paper to the masses and have the general populace embrace the medium.

The documentary is one part history lesson about the American comic book and one part ideology speech. Cima begins by explaining the rise of comic book popularity in World War Two era America, when everyone from service men to housewives could openly enjoy any number of comic genres from monster stories to fluff romances. From there Cima dips into the McCarthy era of the Cold War, when a juvenile deliquesce scare caused Senate hearings to examine the comic book industry more closely. From that point onward, poor distribution, lack of invitation to the populace and stagnation of genres are put up as the main cause of the comic book industry’s shortfalls.

Featuring the opinions of comic greats like Jehb Loeb, Scott Shaw and Dame Darcy, the movie goes on to explore the possibility of the comic culture becoming a dominating feature of the American entertainment industry once again. Sighting the popularity and recognition of comic properties from their movie adaptations, the 9 billion dollar manga industry of Japan, and the varying styles and genres of the comic industry that can appeal to most if not all tastes, Cima ideal is straight and to the point.

The short documentary will be next made into a full length documentary by Olmos Productions, in the coming months. More information on Dig Comics can be found at digcomics.com.

Tune to Blast in the coming days for an interview with Cima.