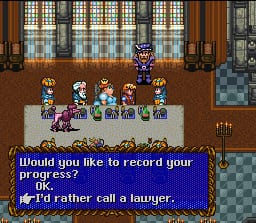 A game that is, thankfully, very aware that it is a game at times.

In honor of the Fourth of July, I’d like to spotlight one of the few efforts of Square’s American branch in the late 1990s.‚  Actually, to be honest, it is the only effort that ever hit store shelves “" Secret of Evermore, the quirky follow-up to Secret of Mana that has nothing in common except a similar combat system and the word “secret.”‚  The best way for me to describe Secret of Evermore is with a mathematical equation:

Thank you, thank you.‚  No, I do not have a math degree, but thank you for assuming.‚  Evermore combines the weird, B-humor of Earthbound with 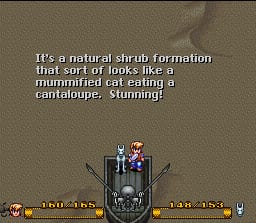 This guy helps you cross a desert, but he's a better tour guide than Charon.

Evermore is the clearly inferior product in terms of the actual game, since it is much easier in certain areas and generally less solidly constructed.‚  For example, instead of acquiring new spells every couple of hours, like in Mana, in Evermore you have to be told spells by certain characters, some of which are hidden or who you never really encounter in a casual playthrough.‚  I remember gazing at an issue of Nintendo Power and being shocked by its listing of about 25 spells, since I was in the last area of the game and had about a dozen.

Spells still level up like in Mana, but annoyingly, you have to purchase ingredients to use them as opposed to having MP.‚  If you have a ton of money, this makes it a little easier to power level your spells, but it means you have to fight a lot more as opposed to using the free recovery spots in Mana.‚  The game also gives little indication of what spells are better.‚  For example, you acquire Sting after Flash, but Flash is better for the most part.

Despite these flaws, I still love playing Evermore for a couple reasons.‚  First, the American influence definitely shines through in the story’s plot and characters.‚  You play a spunky, sort-of-hero archetype; imagine a PG version of Bruce Campbell.‚  He is a bit self-aware of his situation, comparing himself constantly to characters in fictional B-movies and noticing some of the absurdity of the main plot, which has you venturing through four different areas of Evermore “" prehistoric, Egypt-kinda, Medieval Times and the science fiction future “" in order to find a way back to Podunk.

Second, you get to use a bazooka.‚  Yes, a bazooka in a RPG.‚  And it is just as powerful as you would imagine, and if you use it on something mechanical, that mechanical enemy will often blow up in a nice little poof.‚  There is something fundamentally satisfying about this.

And finally, I enjoy Evermore because it is so wildly divergent from every other RPG out there, even to this day.‚  Earthbound was the first game released in America to be REALLY out there, as you used baseball bats to attack enemies and ate hamburgers to restore health.‚  Evermore followed in its path, but outside of those two SNES titles, I’m hard pressed to name other RPGs that have a clear American influence.

Most games are set in that odd “ye olde times” era, with characters using swords and guns side-by-side.‚  The good Shadow Hearts games “" the first two “" have a bit of an American feel, but they’re set in Europe roughly around the World Wars.‚  The third game was in America, but it stunk.‚  The Persona games have a modern setting, but they clearly take place in Japan, with references to weird sushi crap I’ve never heard of and nobody with an Americanized name.‚  (Tangent: Do Japanese and Chinese girls get tattoos with American lettering?‚  I’d like to think they do.)

Because of these factors, Evermore will always have a place in my heart, even if it isn’t the greatest of all-time.‚  If you’re looking for something besides the typical “Save the princess with swords!” experience, then hunt down a copy of Evermore.

Thanks to NFOpocalpyse, who’s review and photo gallery helped me with the images.