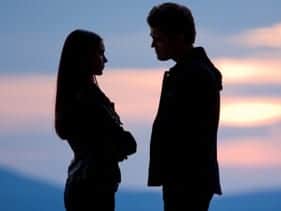 There are shows with pretty high stakes. Vampire Diaries is one of those shows. Last night’s episode, “The Last Day” took those high stakes and raised them a thousand times higher. For starters, the episode started right out with Damon getting right down to the gritty stuff: aka being selfishly Damon (in a way that we all love) and force-feeding Elena vampire blood so that even if this “elixir” doesn’t work, she still won’t die because she will be a vamp. Clever Damon. So basically, we have taken the already dangerous storyline in which Elena could potentially die and turned it to an even crazier storyline were Elena could potentially be vamped.

But it doesn’t stop there. The show finally answered everyone’s repeated question: where is Michael Trevino (sort-of) and brought back Tyler from wherever it is that angry werewolves go to figure out their lives with crazy she-wolves. Klaus needed a werewolf to finish up his ritual so he called Tyler back to mystic falls by way of throwing his mother down a flight of stairs which all seemed like a crazy far-fetched series of events but it brought Tyler back so hey, no complaints here.

Where there is Tyler there is of course, Caroline, and where there is Caroline there is Matt. (and as of lately, Sheriff Forbes) After last week’s episode kind of dropped the Matt/Caroline storyline off the face of the earth, probably somewhere with the Tyler/Caroline storyline, it was exciting to have both of these plot pieces come back in one episode. Tyler and Caroline had moment, filled with the wonderful Caroline and Tyler unmistakable chemistry they had pre vamp-knapping, and immediately their “hey I sorta like you,” relationship went right back to being awesome, leaving poor Matt somewhere in the background trying to wrap is adorable head around the fact that every person around him is some kind of hell creature and exactly where he fits into the whole thing. –Which as of right now seems to be somewhere between Caroline and Sheriff Forbes.

In some episodes, Elena and Stefan can get a little heavy with the brooding and self righteous chatter about who is to blame for all the bad stuff that happens around them, but in this one they definitely tugged on a few heartstrings. Seeing Elena deal with a situation that essentially required her to be a little bit selfish was not what we are used to and was definitely a new spin on things. The result was still her usual self-sacrificing behavior however her final scene with Stefan was, if only this once, heart wrenching and not gut wrenching.

Damon seemed uncharacteristically emotion driven and desperate in this episode which gave Ian Somerhalder a chance to show off his acting chops while Damon ran frantically around Mystic Falls enlisting the help of anyone he could find (Matt with a wooden bullet gun?) to stop the ritual from happening and save Elena. Leave it to Damon to always think backwards. Put Elena in more trouble, then, fix the whole thing anyways. Maybe Damon is just a sucker for unusually high stakes like the rest of us.

Anyways, Damon rescued Tyler and Caroline and had a cute little moment where he tried to rescue only Caroline and not Tyler. Silly Damon, they sort-of pretend not to like each other. Don’t you know that? Watching Tyler, Damon, Caroline, and Matt all run through the woods in a rag-tag band of brothers, cast away from the bigger drama was kind of adorable and fun. Also Damon taking the wolf-bite for Caroline was a bit of an interesting plot-line, that could get looked over in the midst of everything going on in this episode, but is definitely not something to be ignored.

Speaking of taking bites, Elena found Jenna lying in a firey field in total transition mode. This means Jenna is going from clueless and in the dark little Jenna, to vampy Jenna all in a matter of two or so TV days. This show has managed to to characterize every possible type of she-vamp: crazy self-centered Katherine, just-wanna-have-fun Lexi, tragically tragic Vicki, sad and confused but still fighting, Caroline, and seriously misunderstood Isobel. Provided Jenna makes it out of this whole ritual debacle alive (along with everyone else) it will be interesting to see what kind of vamp she would become… or better yet what kind of vamp Elena would become. If they both turned that would leave the vampire count in mystic falls seriously high, so all that can mean is we can most definitely expect to see some fatalities in the coming episode.