Get your shovels ready. It’s time to get your Dig Dug on.

Yes, once again Namco has come out with another throwback title for the iPhone. This time Namco has reached all the way back to 1982 to recover the popular arcade game Dig Dug, a game in which players control a single futuristic miner whose sole mission is to eliminate the dangerous monsters who inhabit the underground, to create Dig Dug Remix.

In Dig Dug Remix there are two versions of the game. First is the original version, which is identical to what you would find in an arcade in the 80’s, just in a smaller package. Second, there is the Remix version, which gives players a more updated and impressive presentation of the classic title. 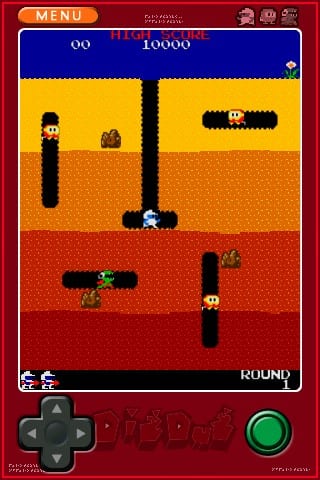 (A look at the classic version of Dig Dug.)

Of the two versions, the Remix is quite impressive and is definitely my favorite game to play. Though this version does not closely resemble its more famous, classic counterpart, Remix really brings a different and exciting look to an old-school game.

The Remix edition also shows an incredible attention to detail for such a simple game. From the character animations to the movement of the dirt, the Remix is sure to please even the most fickle of visual critics. Even things as small as the flowers, which are located in an area that is rarely used in the game, sway back and forth in the wind. I found that the small mole that pokes his head out of the topsoil during random instances in the game to be the most enjoyable of these features. 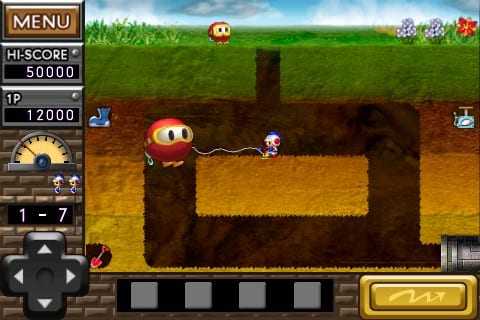 (A closer look at the Remix version of Dig Dug. ‚ Notice the higher quality graphics.)

However, beyond its nostalgic value and great graphics, Dig Dug for the iPhone has one major flaw: the control systems. Dig Dug Remix offers two different ways to control your character. One of these is by use of the basic arrow pad; the other by means of “flicking.” Though both of these control systems have their advantages, neither is particularly useful for this game.

As mentioned earlier, the default control system is by using your thumb to press a basic arrow pad. The pad itself is fully functional. However, the size of the pad becomes very bothersome. When trying to press the up arrow, you end up going sideways instead. Trying to use your index finger to press the arrows is worth a shot, but it feels quite unnatural. Overall, this system was not fun to use. Not fun at all.

The second control system is called flick. With this system, players flick their finger anywhere on the screen in the direction that they want Dig Dug to go. Though it sounds simple, flick is equally as frustrating as the directional pad. All too often my flicks would not register within the game, resulting in many deaths. Also, I would find myself flicking across the main part of the screen in order to make sure my instructions register. However, this would often interfere with the in-game visibility, resulting in more deaths. In a game that relies heavily on precise directional control, these problems are incredibly disappointing.

Dig Dig Remix is definitely a fun app for the iPhone. Namco has been doing a solid job reincarnating the classic titles of the past for use on mobile devices. In the case of Dig Dug Remix however, the control system, which is frustrating enough to make fans new and old very frustrated with this beloved game, makes it quite apparent that there may be more worthy investments for your iCash.

Dig Dug Remix is available exclusively for the iPhone for $5.99.