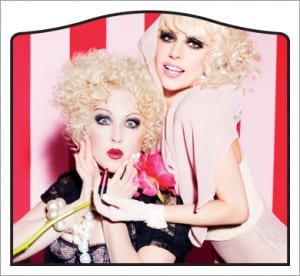 Pop music star Cyndi Lauper and music sensation Lady Gaga are teaming up on a new campaign by joining MAC Cosmetic’s VIVA GLAM program, as the new voices and faces of the campaign to support women battling HIV/AIDS, a campaign that MAC started in 1994. Fergie, Christina Aguilera, Eve, Mary J. Blige and Lil’ Kim have helped to advertise and sell the lipstick line. Every dollar coming from the sale of Viva Glam lipstick and lip gloss is going to the MAC AIDS Fund. The Viva Glam Cyndi and Viva Glam Gaga lipsticks, each for $14, will be available on March 18.

According to HealthDay, Lauper said, “Fighting HIV/AIDS is not a one-woman job. Lady Gaga and I are using our voices as a call to action for women all over the world. I lost a lot of friends to AIDS before we even knew what it was. Today, across the world, women are more likely to become infected with HIV than men. Each one of us needs to do our part to fight for women impacted by HIV and AIDS.”

“We’re raising the VIVA GLAM bar this year with the voices of two incredible artists,” said John Demsey, president of Estee Lauder and chair of the MAC Aids Fund. “Lady Gaga and Cyndi Lauper are bringing women’s issues to the forefront of the HIV/AIDS crisis. We have one artist that hit the music industry at the beginning of the HIV/AIDS epidemic in the 1980s, and another that is explosively popular with young people today. They represent different generations that are equally as affected by this disease, and both are helping to spread the message of the power of one lipstick.”

The program has already raised more than $150 million to combat the disease all over the world, from South Africa to the rural southern United States.