Final Fantasy IV is one of the most beloved classic role-playing games that graced the Super Nintendo back in the 16-bit era, and its 3D remake was one of the top games to release on the DS last year. Its strengths were its story and characters, as well as the way they were presented “" the game was very well paced, given the limitations of the cartridge era, and did much to evolve the nature of RPG storytelling, much like later, better known classics such as Chrono Trigger.

The classic design is not quite long-in-the-tooth thanks to the remake on the DS, but if you were to play the original SNES version “" which was Final Fantasy II here in the States “" or the Game Boy Advance update as a first timer now, you may think that it is a bit dated, with its non-orchestral soundtrack, level grinding, and simplicity in presentation. For those who are familiar with the game though, nostalgia helps keep you as amazed with the game in 2009 as you were when you first played it 10, 15 or nearly 20 years ago, when you were first introduced to something called the “Active Time Battle” system.

That’s why my feelings toward a sequel for Final Fantasy IV, retrofit like Capcom’s Mega Man 9, were so mixed prior to playing. You have an absolute classic that helped shape the role-playing genre on one hand, and you have a sequel released on WiiWare 18 years after the fact “" a sequel that was originally designed as a cell phone game. Two things gave me confidence about the quality of the product heading in, though: for one, Matrix Software, developers of the Final Fantasy III and Final Fantasy IV remakes (as well as the ambitious and innovative Avalon Code) created the game, and two, it uses a game universe many other gamers and I adore, that of Final Fantasy IV. Do Matrix’s development chops and FF IV’s backstory create a new entry in the series worthy of its name?

The short answer is “yes.” Final Fantasy IV: The After Years is a success, in that it replicates the FF IV universe well, knows its characters and mythology, and is able to implement new gameplay ideas that do not seem out of place in a very classically oriented design. With that being said, there are some flaws with it that bear mentioning, and we’ll get to those.

The After Years is not a one-shot game; instead, you pay $8 to download the main storyline that features Cecil and Rosa’s son Ceodore as he begins his quest to become a full-fledged knight “" a quest that turns towards the return of the second moon and the strange appearance of a powerful new Summoner bent on destruction and the collection of both the light and dark crystals. In addition to this, there are add-on quests (for $3, or 300 Nintendo Points a piece) that give you backstory and flesh out the supporting cast. At release, the first of these, “Rydia’s Tale: The Eidolons Shackled,” was already available. Square Enix has not given final pricing information, but it looks as if this will eventually cost as much as a budget title on Wii “" somewhere between $30 and $40, perhaps. That’s if you buy all of the add-ons, though, and the value per hour is solid; I played through the first quest, as well as the available add-on, and ended up with over seven hours of playtime for my 1100 points ($11). 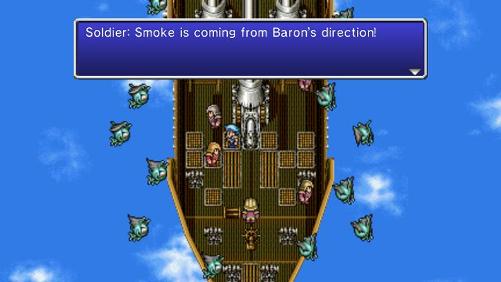 Graphically, this game looks like an improvement over the original Final Fantasy IV, which was made very early in the SNES lifespan and therefore did not take full advantage of the console like later Square titles. The sprites are larger, and the colors are brighter “" these are both things you will notice during flashbacks, though the change is apparent enough that you will see it upon starting the game. It’s still a 16-bit title though, so if you’re not down with paying for classic design, you should know that in advance. The sound quality is worse than on the SNES though “" while the music sounds fine (though the bass is more pronounced in these versions of the songs than they were in the original) some of the loud sound effects for explosions, earthquakes and cannon fire sound like the kinds of things you would hear out of a standard cell phone.