Despite being one of Nintendo’s most popular franchises, Punch-Out!! was‚  a no-show on both the Nintendo 64 and the GameCube. It’s not strange for a Nintendo series to skip a console “" the Excite racing series was also recently reborn, Kid Icarus has yet to be seen in a form other than 8-bit, and even one of the big three, Metroid, went on hiatus during the N64 lifespan “" but it was sad that Little Mac was nowhere to be found, given the fantastic gameplay, character, and difficulty in his franchise. Thankfully, Nintendo finally hired Next Level Games (Mario Strikers Charged) to develop the long-awaited next entry, and they did not disappoint; the gameplay holds up, even after 15 years, and Next Level Games’ attention to detail and nostalgia “" as well as their own refinements and enhancements “" makes this the Punch-Out!! title to own.

We’ll start with the controls, as these could make or break the Punch-Out!! experience, given the game is built on timing and memorization. There are standard controls, set up just like the original NES version of Punch-Out!! that is available on the Virtual Console. Press 1 and 2 to punch, left, right and down on the D-pad to dodge and duck, and up plus the punch buttons to throw a punch at your opponent’s face. These are simple and time-tested, and it was a good idea to include them with the release. This is because it is the preferred method of control as you delve deeper into the Punch-Out!! experience, as they are the quickest route for consecutive actions. This is not to say that the motion controls do not work “" in fact, you could use the motion controls through the entire game if you would like, as they are responsive, accurate and immersive, but you will reach a point where pressing a button is faster than throwing a faux punch, and you will need that extra speed. Balance board controls are also included, though if you don’t think that the regular motion controls are fast enough those definitely will not work the way you want them to. 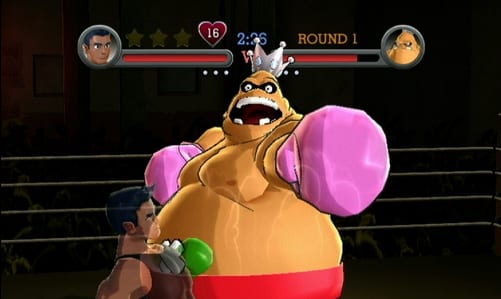 Graphically, Punch-Out!! is a looker. The cartoony style is welcome, and Next Level did a wonderful job of bringing characters from the 8-bit and 16-bit era into this generation. The attention to detail in fights is wonderful, from character’s reactions to getting hit, blocking a punch, or the smirk on their face when they are about to lay into you with a flurry of hooks. You can also see the result of your punches (as well as the ones you take) in damage on Little Mac and your opponent’s bodies and faces. The crowds all look active and alive, and though you can’t see their faces due to the way the lighting outside of the ring works, they still look like a real crowd (drawn in Punch-Out!! style of course). The game looks as good in motion “" if not a little bit better “" as it does in screens. The sound is another high point, as the classic Punch-Out!! music is remixed multiple times, giving you variations of that catchy tune. The sound effects are a mix of new and old, but all are well done and will bring a smile to your face; nothing is more satisfying than sending a boxer to the canvas and hearing the classic knock down sound effect.

As for actual gameplay, Next Level Games made sure you had reason to pick this up for $50 other than a graphical update. There is your basic career mode, where Little Mac takes on 13 fighters (12 returning and one new opponent) in order to become champion of the World Video Boxing Association. Fans familiar with the series should get through this portion of the game in just a few hours, but for those who are first acquainting themselves with Punch-Out!!, the task won’t be so easy. You learn how to beat the opposition by memorizing their attack patterns and exploiting their weaknesses, so you need to see them before you can beat them most of the time. If you hit them at just the right moment, you can earn a star “" use a star punch with the A button to level your opponent. Star punches range in power from one to three stars, but be careful, as getting hit causes you to lose your stars. 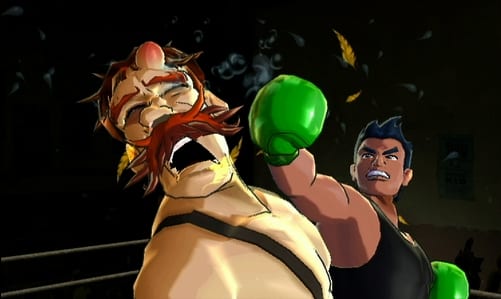 Luckily, there is more to career mode than just your first romp through the 13. After you become champion, it’s time to defend your title, and you will fight each of the characters once more. The twist is that they have learned from the mistakes they made (wouldn’t you do some soul-searching after losing a boxing match to a 5’7″, 107 pounder?) and covered up for their weaknesses. Glass Joe now wears a helmet so you can’t just knock him in the head and start counting. King Hippo has covered his bandaged belly with a manhole cover (ouch?). I don’t want to give too much away, but the opposition is much more difficult the second time around, which should please longtime fans of the series looking for something new to keep them coming back.