There is also an exhibition mode, where your trainer Doc Louis has you fight against boxers you have met in the ring previously, in order to improve and practice against them for career mode. This is a good place to learn where your opponent’s weaknesses are “" if you have not defeated them, they appear as an unbeatable hologram “" but it is also where you can earn achievements and extend the replay value of Punch-Out!!. This is where you are tasked with goals such as defeating Von Kaiser without missing a punch, or knocking out Glass Joe without blocking, ducking or dodging, or taking him down in one punch. Beat King Hippo without tiring once, take out an opponent in just a handful of punches… some of these are simple, but many of them are very difficult, and require practice to master. These are the key to bragging rights for Punch-Out!!, and I can see YouTube filling up with proof of someone’s awesomeness already. 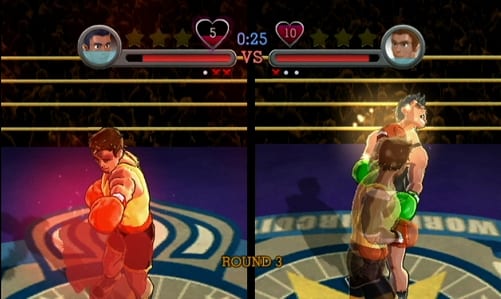 You also have multiplayer, which is a first for Punch-Out!!. You and a friend both play as Little Mac (though the Mac is changed to the name of your Mii) and the game goes split screen. You punch, block,and‚  dodge just as you would in single player, trying to discern what your buddy’s pattern is in order to knock him down. If you manage to fill up your power gauge, you transform into Giga Mac, and the game returns to full screen view. It is possible to defeat Giga Mac as Little Mac “" we are talking about the guy who knocked out Mike Tyson, after all “" but it is more difficult given his reach and power. This mode is not without its faults, but it is fun and a good way to introduce Punch-Out!! to your friends that aren’t familiar with it.

The lack of online multiplayer is disappointing, especially given that Next Level Games has already proven they can do it with Mario Strikers Charged. Even just online leaderboards would have sufficed in my opinion, as this is a game that cries out for competitiveness given the matches are timed and require loads of skill to beat quickly. Maybe next time, but for now, the lack of either is an oversight.

Next Level Games’ Punch-Out!! is a love letter to the original versions of the game, but it is also full of improvements to the series, like the title defense mode and the exhibition/achievement modes. Throw in the visual beauty of the title, along with the lovingly crafted sound effects, music and the fact that the gameplay is as fantastic today as it was 20 years ago, and you have yourself a serious contender on the Wii.