The future is an uncertain, scary place.‚  Why not stay in the comfortable confines of the past. You know, because it’s already happened, what can go wrong?

Guerrilla Games, developers of Killzone 2, the Playstation 3 exclusive did just that and are set to release two quasi-new maps, Beach Head and Southern Hills as part of the Flash and Thunder Map Pack set to arrive after the E3 craziness has calmed down June 11.

While you’ll remember the two environments from the original, Guerrilla promises that “both levels have been completely re-envisioned with the Killzone 2 engine and technology.”

That is indeed good to hear, but what about the maps themselves, if say, you’ve forgotten, or skipped over the original entirely.

Guerrilla explains their maps in such a perfect manner that only their descriptions can suffice. Enjoy.

Beach Head- “the Helghast land on the sandy Vektan beaches forcing the ISA to defend their stronghold. Torrential rain and gale-force winds batter the landscape, with the water-filled craters supplying only limited cover. This harsh terrain requires you to keep your “head on a swivel” as enemies lurk around every corner.” 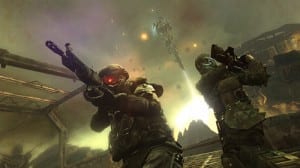 Southern Hills-“takes the battle to a central Helghast base camp located on a hilltop. This version has been beefed up considerably over the original Killzone counterpart, with smaller structures offering plenty of hiding places that lend itself well to close quarters combat and long range sniping. Take cover when you hear alarms going off, as there might be a radioactive surprise headed your way.” 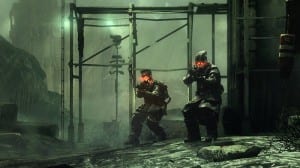 The Flash and Thunder pack hits the PlayStation Store June 11 priced at $5.99, with a promised game patch coming next week.‚  As always stick around for forthcoming details.