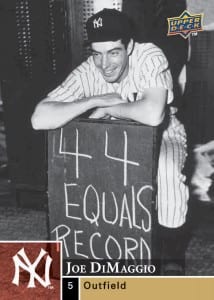 Upper Deck and the estate of the great New York Yankees slugger Joe DiMaggio reached an agreement to produce trading cards that include DiMaggio memorabilia and cut signature cards.

To commemorate the exclusive deal for UD, a limited Joe DiMaggio card, #0, will be packed inside 2009 Series One Baseball packs coming out this week. The card features “Joltin’ Joe” next to a chalkboard after he tied the Major League Baseball consecutive games hitting streak record at 44. On the chalkboard it calls out “44 EQUALS RECORD” with a smiling DiMaggio kneeling behind it.

“We are thrilled to be able to work with the estate of one of the biggest names in baseball history,” said Jason Masherah, Upper Deck’s senior brand manager. “Collectors and sports fans should be excited about finding Joe DiMaggio content inside of many of Upper Deck’s 2009 baseball card releases. In this day and age when records fall frequently, DiMaggio still holds one of the most amazing baseball achievements of all time.”