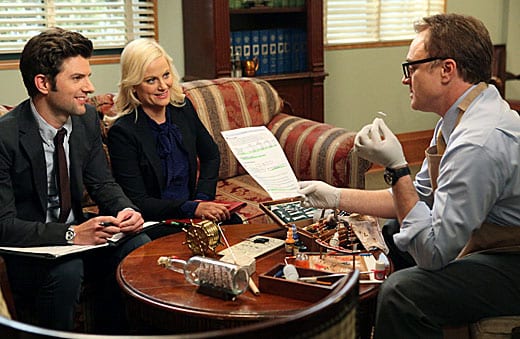 Bradley Whitford guest stars as "Parks" pays homage to "The West Wing" after a five-week hiatus.

After what has been an excruciatingly long five weeks for this reviewer, and I’m sure many other fans, we’re reunited, and it feels so good. And while the other comedy I cover, “New Girl” has elevated itself in the interim, there’s no question that “Parks” is still the prima ballerina. Like it never left us, “Live Ammo” danced its way into our hearts, even delighting “The West Wing” geeks with an appearance by Bradley Whitford as soon-to-be retired Councilman Pillner. Devoted fans of the drama (one of the rare all-time greats I haven’t had the pleasure to watch beginning to end yet) were treated to Aaron Sorkin’s infamous “walk with me, talk with me”  down the hallway. Even the title of the episode, and its accompanying quote—”We play with live ammo around here”—are relics of the beloved show that set the standard for depicting the American political landscape.

The devotion for “Parks” is just as fierce though, and I’m sure expectations were high for how strong these characters would come back. Funny thing is, I’d forgotten how much the people I thought I knew had changed. Ann and Tom are still dating and she’s even spending time at his place. Granted, it’s mostly because he outfits the space with every amenity a woman could want. Ann is in love—with his apartment. It’s girl heaven. “He’s seriously in debt, but who cares.” And that’s all we get that addresses their situation directly. They don’t even spend any time on screen together if memory serves, but no news might be good news for Tom since he always seems to be his own saboteur.

April seems to have made the most drastic shift as she is now running the parks department in lieu of Leslie. She may not be prepared, but she’s motivated. The very thought of April showing passion for anything is frightening, but the writers have done a superb job of making her evolution gradual and organic this season. She still has little patience for people, and in her meeting she resorts to name calling, but when Leslie needs a boost in PR, she devises her own plan. Tom had inspired her earlier, reminding her that Leslie gets so much out of the job because she puts so much in. If she can find a passion project, she just might take pride in what she does. It’s shocking to see April enact any initiative considering she studied at the Ron Swanson School of Stalling, and yet there she goes organizing a pet adoption in one’s Pawnee’s finest parks.

Now why does the Knope campaign and the parks department desperately need an influx of good press? Well, during her power stroll with Councilman Pillner she asks him to find another area to cut in the annual budget since the current proposal takes 8% off parks. Her pitch is soild, a picture of a sweet girl who flourishes in five of the parks programs, and they are all that separates her from a destiny of stripping, or prostitution, or general debauchery. Pillner’s sold so he strikes down another program. What program you ask? Oh, just an animal shelter.

Her opponent, Bobby Newport’s hotshot advisor, Jennifer Barkley (played wonderfully by Kathryn Hahn), jumps all over this. On “Final Word with Perd” she brands Leslie a dog murderer and even Perd Hapley is convinced by her menacing tone. Ben had warned her that any moves she makes to advocate for parks could be a liability, but you can’t take the parks department out of Leslie, and he knows that. Damage control is a necessity though as little girls begin to call the campaign complaining they can’t sleep for fear that Leslie will kill their doggies. Yikes.

While April helps the restore the image of the parks department, Leslie goes overboard like only she can by adopting a slew of cats and dogs, plus a pig. Aware this cannot be their end game, LesBen conjures up another program that might replace the animal shelter as expendable. Leslie stumbles upon some “D1” public works programs that have been inactive for two years and Pillner accepts. Animal shelter stays, AND parks budget stays intact. LesBen begins to lay back and relax, comparing themselves to the Obamas (Ben humorously realizes that he is the Michelle in this pairing), but not for long. Ann bears the bad news that Pillner expanded on Leslie’s proposed cuts and slashed even more “D1” programs which includes Ann’s position. WHAAAAAAT?!

Frustration sets in for April after only giving away one dog despite the efforts of Jerry and Donna. Jerry cleaned the cages of poop and Donna made up labels with photos and fake personal histories (lots of them saved people from burning buildings). Then, a lady drops off two unwanted cats and bolts. Now stuck with more animals than she started with, she angrily chases the lady down. The next day she doesn’t show up to the office and Tom decides to provide her with some perspective. Seriously, when did these characters become so mature? If any two characters on “Parks” were stunted in their growth it was April and Tom, but this season they’re breaking through their stubborn qualities. April’s now motivated to be kind and do good, and Tom is able to be sincere without promoting a product or making some douchey come-on. Progress people. Anyway, in Tom’s touching scene he lifts April up by imparting some of Leslie’s wisdom: you work for that 2% of the time where you feel rewarded. One elated girl is loving a puppy who would have had no one otherwise. That’s the job. Even April can’t resist a smile after that.

For Leslie, her options are quickly lessening, and will it would seem like she’ll have to either sacrifice principle or her campaign to save her best friend’s job, but she invents a seemingly impossible third option. It’s sounds dangerous because it’s called “political suicide,” but she’ll actually come out fairly unscathed after falling on her sword. Truthfully, it’s ingenious and props to the writers for this. They clearly studied their “West Wing.” Her plan is to offer Jennifer the idea that Bobby Newport funds the animal shelter with his personal fortune. That way the parks budget doesn’t get cut and Ann keeps her job. In return, Jennifer must stop running “puppy killer” ads. And to cover her tracks, to ensure Jennifer doesn’t go back on her word, she promises to cut the parks budget herself so that she comes off as tough, fair and self-sacrificing, therefore undercutting the goodwill the Newport campaign will garner for its philanthropy. On the surface, it looks like Leslie gets very little while she hands Newport a surge in the polls on a silver platter. But she’ll let him win this week. Next week, they have a debate, and he must open his mouth. Leslie’s confident she’ll tear him a new one. This is precisely how Leslie can play politics and not lose herself.

Off in the background, yet somehow stealing the show, were Ron and Chris. Seeking a replacement for Ben as assistant city manager, Chris informs Ron that he’s a finalist for the position. Ron’s both unenthused and thrilled. Any job in government is considered despicable to him, and yet he can use his influence to cut wasteful government spending (he suggests his first measures will be to take down traffic lights and dismantle the post office). Chris then invites Ron to meditate with him. Ron accepts although the idea sounds stupid—the need to wear yoga pants might have tipped him over the edge—and Ann warns him that he’ll want to die. But Ron does not shy away from a challenge and endures the six-hour meditation. With Ron Swanson badassery, he stands the entire time, having not a single thought.

When Ron expresses his disinterest, Chris acknowledges that he figured he wouldn’t enjoy it. The simple act of accepting his invitation proved that he was not as inflexible a coworker as he thought, and he’s now earned his spot as assistant city manager. Ron gleefully accepts and then goes to devour a meat cone. I was amped at the prospect of a Ron/Chris pairing. They’re such philosophical opposites that it’s a recipe for comedic splendor, especially with Nick Offerman and Rob Lowe’s utter dedication to their roles. My excitement is short-lived though when another councilman discretely notifies Chris that he’s on the chopping block if Bobby Newport wins. Chris then immediately resorts to one of his ruts and Ron helps him cope with his brand of solution—whisky. Averse to positive thinking, it irks him to even attempt, but he prompts Chris to consider the upsides. Ron sees it as an opportunity to free himself from an entity that sucks the lifeblood from hard-working people. Chris, however, sees Ann through the windows and his worries dissipate.

Between Chris’ discovery about his job insecurity and the impending debate, the stakes are higher than they’ve ever been. And is that last smile at Ann indicative of a potential love triangle? As improbable as it may seem, Tom and Ann are happy, and I don’t want to see Tom hurt. But Chris’ moping certainly doesn’t sit well with me either. This wonderful dichotomy of pure joy and serious consequence is as admirable as it gets for a supposed workplace sitcom. It’s this ambitious aim that puts it head and shoulders above other funny half-hour retreats, even when it disappears for a while. I threw my head back in laughter at their hysterical observations while I also bit my nails anticipating what fate might befall my friends. I’m overcome with enthusiasm and relief now that we get to play in Pawnee for a few more weeks! A 5-star return.

– “Our department is the only thing between her and a life of tube tops, tribal tattoos, and barfing in hot tubs.”

– “Chris, I feel I should remind you that I do not believe the position nor government should exist. That said, you’d be a fool not to pick me.”

– Tom enjoys naming drinks: “Beer-yonce, beer in a sexy ass mug.” “Jay-Zima, they bought a whole bunch of Zima when the factory shut down.”

– “Hey honey good morning, how did you sleep, I adopted 32 cats and dogs, do you want pancakes, I need pancakes.”

– “They should be rewarded for not being people, I hate people.”

– “I know you’re just making a joke, but using a bigger bottle would be considered cheating by most of our trade publications, FYI.”

– “If you’ll excuse me, there’s a hot spinning cone of meat next door, and I plan to eat the whole thing.”

– “I mean, in the grand scheme of things, who cares? We’re all just molecules floating around in random patterns, devoid of meaning.”

– I will not let you return to a life of shaving wieners and dodging knife attacks from meth heads!”