Myst was a game so beautiful, so technologically revolutionary and so cerebral that it was the best selling computer game of all time until millions of screaming girls started playing “The Sims.”

The game also spawned a generation of gaming. Many people call it the phenomenon of the “Myst clone,” but make no mistake, the entire genre of mouse-driven adventure games pays homage to Myst. (Read The Review Center’s original review here)

Darkness Within: In Pursuit of Loath Nolder is no Myst.

But it is a mouse-driven adventure game with deeply challenging puzzles as you play detective Howard E. Loreid, lead investigator on the case of the Clark Field murder. The game inspired by H.P. Lovecraft, and if you’re familiar with Lovecraft’s works, Darkness Within is a familiar yarn about estranged family members’ secrets and the occult. The plot is jaded, but it’s a video game, so I let the clich©s go usually. No, the plot doesn’t hurt “Darkness,” it’s the terrible gameplay and lack of character interaction.

Loreid is having nightmares lately, and the game opens in one such dream about a mental institution and a dead body. He wakes up to the sound of his cell phone ringing and his office calling. Loreid has to get out of bed and head over to his office, finding his phone and car keys in the process. No shower, no getting dressed, no animation, just clickity click click and you’re suddenly headed to the police station.

The “police station,” like most scenes in the game, is a beautifully decorated, wholly un-interactive experience. Loreid’s office is just that, a one room office with no people, no activity, a phone you can’t use and a computer you can’t interact with. Comeon folks, they were letting people click more items in rooms in 1995 games. 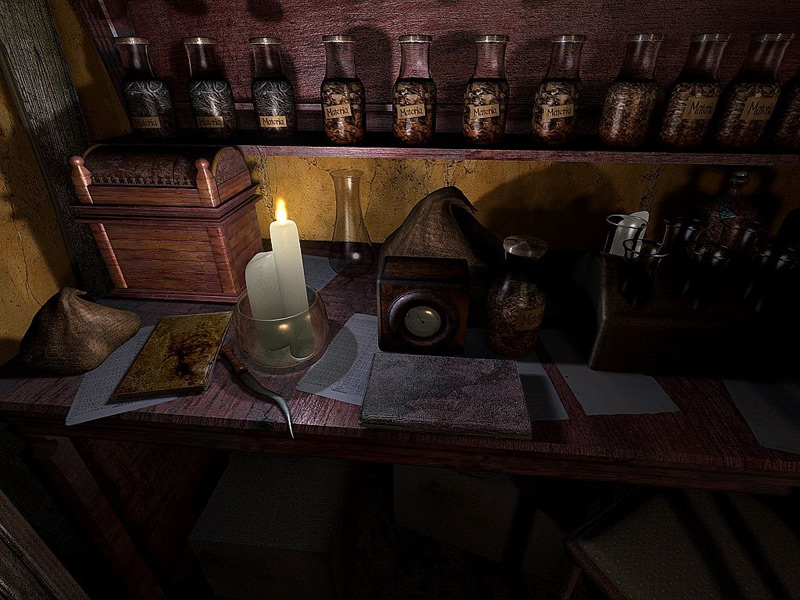 What really gets me is the sheer lack of any character interaction. The game starts with a ringing cell phone and a coworker calling, but there’s no bustling police station, paternal captain or fellow officers — just an empty office.

Still, the one room jobs are far better than some of the larger scenes. There’s just too much clicking. Like going up a flight of stairs — you click once to go up halfway, then again to move across the landing, then again to go up again, then another click to open the door at the top of the next landing. You also have to be in the correct step to interact with items and evidence. If you can see something, you can’t click it until you’re right up against it. Then you click it and the item zooms up. Then you click it again and you can finally look/analyze the item.

And that’s what turned me off of Darkness Within: In Pursuit of Loath Nolder. It takes so long to move around and find things, that I didn’t have any mental energy left to dedicate to what are actually pretty well-crafted puzzles.

That’s all in spite of the fact that Darkness Within is a beautifully well-designed game. For a low-budget title, the graphics are excellent, the lighting effects are superb and the item detail defy it’s system requirements (set at 1 Ghz/512MB RAM).

Sure the occult angles and soap opera family troubles are brilliantly unoriginal, but really it’s the terrible controls and the awful gameplay that make Darkness Within: In Pursuit of Loath Nolder fail to make the grade.

The game also takes up over a gigabyte of hard drive space, and since Lighthouse and Zoetrope decided to distribute the game on CD-ROM instead of DVD-ROM, you have to install the game from both CD’s. Installation alone takes 20 minutes.

This is all a damn shame because the PC world is desperate for a strong adventure game. Next Life, anything Agatha Christie, Anacapri: The Dream, Operation Wintersun, and now Darkness Within have all been god-awful. Sadly, Darkness Within is the best Adventure game on that list, and for an adventure game whore like me, it’s a sad time to play video games.

I know we get a cut of the proceeds, but click the link to the right, do yourself a huge favor and buy Indigo Prophecy. It’s a few years old, but it’s the best adventure title of the 21st century, and you can get it for 10 bucks.

Play that game and learn what’s missing in the modern adventure game, and without going too far into a tangent, let me just say that the latest games, including Darkness Within are missing the mark on cinematics and creating bland, stale, detached characters. Even in Myst, players grew attached to the plight of “The Stranger.” Howard E. Loreid? Not so much.