In film and screenwriting circles, there’s much talk these days about the lack of originality in feature-length theatrical films (this excludes movies made for streaming services such as Netflix and Amazon). What you are more likely to see at your multiplex is a sequel to something (Rambo: Last Blood), an adaptation of a comic book (every Marvel movie), or a reboot (IT, which is also an adaptation). Few and far between are original ideas that sprung, Athena-like, from a writer’s head. 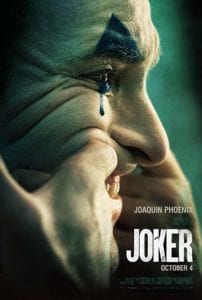 Yet there could be a new species of film developing, one that combines the trend of sequels, reboots, and adaptations with originality. What can I possibly mean?

I give you Joker. The ‘Joker,’ Batman’s arch rival, has appeared in dozens of comic books and cartoons, and probably just as much in TV (if you count the old Adam West series) and film. To say the Joker is an original character is of course false, but the way he’s presented in 2019’s feature film is.

Studios are loathe to take the risk of filming and screening wholly original stories, but they have carved out exceptions whereby characters from old films and series are re-imagined. Alternative history in film is also a growing sub-genre in entertainment and aligns closely with movies such as Joker. What if the Nazis had won World War II? What if a Christian theocracy took over the United States?

And what if the Joker isn’t simply an arch villain bent on conquest and loot who leers and laughs but otherwise has no depth or motivation?

Since this trend seems to be new, there aren’t many comparisons to be made. Something that might come close is The Equalizer. The 1980s television series starred Robert Woodward as an ex-CIA agent who, perhaps regretting things he did as a spook, sets up shop as an avenging angel to help those in need.

Woodward was an older, British, pasty white man who looked incapable of running or fighting. In 2014, The Equalizer was rebooted as a feature film starring Denzel Washington. Though Denzel might be getting on in years, after that, he parts ways in all physical appearance and ability from Woodward. Denzel’s equalizer cuts a swathe of Jason Bourne, John Wick-style devastation through mobsters and corrupt cops. He had fled his former life and was only dragged back in to exact a kind of personal revenge–not to be a Robin Hood.

Joker accelerates the re-imagination trend to the point where I could see a Superman movie in the near future in which Clark Kent isn’t a middle-mannered reporter with an alter ego but a partisan journalist who likes to take scalps House of Cards style. Or maybe Wonder Woman doesn’t descend from Hellenic Gods but is a politician who kicks ass both in the flesh and at the ballot box—all the way up to the Presidency!

All this said, how does Joker, in this iteration, fare as a movie? You might be surprised to hear me say, it’s wonderfully done. It has already won some major film awards and will probably garner many more.

There is perhaps the whiff of false advertising about the movie. Joker is not a superhero movie or an action film. It’s a character-study. Those looking for comic book fights and special effects will be disappointed.

Joker is set in a 1970s-80s Gotham, and the poor city can just never seem to catch a break. There’s a garbage strike on, super rats plaguing the burg, and a real sense of rage on the streets. It recalls the New York City of Charles Bronson’s Death Wish and Bernhard Goetz’s subway shooting.

And struggling to make his way through the wasteland is wannabe comedian Arthur Fleck. He’s mentally ill and suffers from a Tourette-esque tic which causes him to laugh (cackle) uncontrollably. He lives with his invalid mother. His life is shit. He’s a nobody. Worse than that. Less than zero.

Arthur Fleck is not an evil mastermind in the making. He’s a wholly sympathetic societal cast off. Turn about is fair play, and it’s Thomas Wayne (Bruce’s father) who is portrayed as an elitist, robber baron, and the film asks us to despise a man who was almost always presented as wealthy but noble.

You might go so far as to say Joker is an origin story for Batman, but its real goal is subversion. Subversion of expectations. Subversion of just about everything. The Joker was always about anarchy, wealth, and power, but never so much personal affirmation.

That’s what Arthur Fleck wants. Just a little bit of respect and attention, and when he doesn’t get it, he turns to violence to set himself free. There’s a touch of Son of Sam in him—mad but fame hungry—and he’s a lightning rod for all the pent up aggression in Gotham, which results in a hot mess of Antifa, Occupy Wall Street, and V for Vendetta mob action.

The quasi-revolution is not judged harshly. It’s as understandable as Arthur’s affliction, but it also could be delusion. What’s real and what’s not is hard to discern. Arthur’s laugh masks his anger, and that could be just the point. Society puts on a happy face, but it’s sick and sad beneath.

It comes as no surprise then to see Robert De Niro in a supporting role as a late night talk show host, a la Jonny Carson. It’s a clear nod to 1982’s The King of Comedy, a film in which De Niro is the delusional, aspiring comedian. His hero and foil is Jerry Lewis who plays the biggest star in late night TV, Jerry Langford. Though The King of Comedy is not a dark film by any means, the homage (or is it subversion again?) is clear. But in Joker, De Niro is on the other side of the desk and runs his show in a cynical, Network-style fashion.

Really, you could take out any reference to the Batman universe and have a penetrating movie about nature versus nurture, and the pursuit of fame and success and what it leaves behind if it you fail to obtain it.

That’s what is percolating beneath the surface of Joker. It’s not about a fiend taking over the city and a good guy who stands in his way. It’s about frustration, the thirst for validation, which is only a chimera, and doesn’t mean anything in a world that will eventually be consumed by the sun in a billion years.

Joker isn’t about good or evil or angels and demons. It’s about real forces and why some succumb to darker impulses while others can navigate mediocrity passively. It might be a plea for the agnostic or atheistic not to forsake morals, to instead lead good lives despite the obstacles put in their way.

That’s the true power of the film, but one wonders if any of it would have been possible but for the pulp scribblings of comic book writers some 80 years ago. If Hollywood can’t create good, original film anymore, they can certainly do worse than sound-boarding off of the works of others, and Joker is living, maniacal proof of that.

Blast Magazine Score: 3.5 out of 4 stars