Last month, I reviewed Marvel’s Spider-Man: Far From Home. The movie left me feeling flat but also under prepared. I had only seen half of the Marvel Universe’s line up prior to Spider-Man and believed my experience was possibly tarred by not having a strong grasp on all the jokes and story lines. 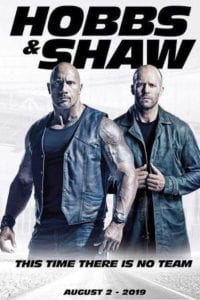 Whether or not that was true, I decided not to make the same mistake with my next review, Hobbs & Shaw.

Lest we forget the origins of Hobbs and Shaw (and some marketing department might be afraid of just that), the official title of the movie is The Fast and the Furious Presents: Hobbs & Shaw. That does sound a bit too much like a master of ceremonies presenting a handsome young couple at the cotillion, so the briefer Hobbs & Shaw will suffice from here on out.

In case you hadn’t unpacked it already, Hobbs & Shaw is a spinoff from said ‘Fast and Furious’ franchise, which boasts eight previous films (with another scheduled for 2020) and over $5 billion in box office receipts.

When asked to review Hobbs & Shaw, I had only seen the The Fast and Furious (2001)–the movie that got this whole hot rod in gear. The original was a decent enough film, if a bit campy, about illegal street racing, which starred Vin Diesel and Paul Walker.

Diesel’s character, Dominic Toretto, was the man to beat in a race, but he also operated a low-level criminal gang, and Paul Walker’s Brian O’Conner was the undercover agent sent in to bust it up. In order to get inside Toretto’s circle, O’Conner had to prove himself as a great wheelman. Naturally, he did, and what we got was sort of a Point Break but with V-8s instead of surf boards.

I won’t recount all the details of the movie, but The Fast and Furious was a hit, and a franchise was born.

Over the eighteen years of its existence, the series evolved the gang of crooks and street hustlers to master thieves, using their knowledge of fast driving and faster wits to pull off heists and other jobs. From there, circa movie number six, our former gearheads became indispensable to world spy agencies in saving the planet.

I’ll sum up how we got from A to B by detailing just one character’s growth. In 2 Fast 2 Furious (2003), the second movie, we meet Tej, a mechanic in Miami who’s hip to the local racing and crime scene. By the end of part eight, Tej is familiar with the internal workings of 1990s-era, Russian nuclear submarines and can fight with the skill of Jason Bourne. Too much? Too ridiculous? You decide.

I liked the first movie. It wasn’t to be taken too seriously. It exploited a niche about street racing and gave us long pans of bright cars with women in the shortest skirts you ever saw bent over brassy and bulbous engines. There were races, chases, sex, and a story. In addition, it had Vin Diesel growling all his lines. His muscle shirt and his chrome dome added to the mystique.

I forget how many circles of hell there are in Dante’s Inferno, but whatever the count each one must include a chapter of The Fast and Furious franchise, and it was an act of pure masochism to work my way through them all. But at least no one could say I didn’t do my homework going into Hobbs & Shaw.

Who are Hobbs & Shaw, and why has this preamble been so long? In one of The Fast and Furious chapters (I forget which), we are introduced to Agent Luke Hobbs, played by Dwayne “the Rock” Johnson. He works for some lettered agency of the US Government, tracking down the bad guys and never missing a chance to kick ass or make a wisecrack.

One of his jobs is to bring down Toretto and his gang. The franchise, now having the equivalent level of professional wrestling story lines, decided to flip the script. Hobbs and Toretto eventually team up to find an even worse guy, Deckard Shaw (Jason Statham). It’s not by coincidence I mentioned pro wrestling, because at a certain point, Shaw, the once dastardly heel, becomes a hero, and he in turn teams with Hobbs to take on an even worse character in The Fate of the Furious (2017), part eight of the series.

And now we have arrived at the present. Vin Diesel and all the other characters from the previous eight films have been jettisoned, and it’s Hobbs and Shaw alone against someone who wants to take over the world for some reason.

And how is Hobbs & Shaw? You might be surprised to learn I laughed a lot. Not at how dumb the movie was (trust me; it was dumb), but how good the repartee was between Hobbs (Johnson) and Shaw (Statham). The jokes are the best part of the movie. It’s muscle against muscle much of the time, but the best parts are Johnson’s beefy American put downs and threats versus Statham’s cockney chatter and stiff upper lip, British bemusement with the yankee.

This is what Hobbs & Shaw is built around. Anytime plot intruded, I noticed the audience flagging, thinking: “Do they really want us to believe this turn in the story?” And it’s as if the producers could foresee this because when the story seemed to be getting too outlandish to trust, if not a series of jokes and one liners occurred but a cameo by a famous actor or actress happened. And the audience loved it. I’m talking cheers and sentimental ‘awwws.’

It’s strange that genuine talent appeared in this movie. Helen Mirren, Idris Elba, Charlize Theron (in the previous F and F movie). They might spin that it was fun to be in a pure action movie, a change of pace from more serious fare, but I’m thinking the paychecks were irresistible. The content was certainly resistible, but the $200 million dollar budget might have been more persuasive.

As with Spider-Man, my conundrum was the same. This in spite of being fully informed about the F and F series. How should I view Hobbs & Shaw? From the perch of the snobby film critic there was nothing of value. I like a good popcorn movie, but for me this was a bucket of kernels.

Yet I am one person and clearly being over ruled by audiences who appear engaged and invested by these characters and stories. While I was yawning at the climactic action sequence, the woman in the seat next to me was clutching her friend in fear as our heroes looked to be in peril. Of course, the heroes triumphed. They always do because there’s always going to be another movie.

And so, for me, the needle has not moved. As with Spider-Man, go for a laugh or two, a big soda, and a communal experience with fans of the series but don’t expect anything that resembles a movie. Keep thinking pro wrestling.