After some quick internet research (is there any other kind of internet research but quick?), I discovered that Jonah Hill was born in 1983, so by the ‘mid-90s’ he was a pre-teen. He grew up in a wealthier part of Los Angeles, but surely the down and dirty party and skate scene must have been in his orbit. It is this back drop that informs his directorial debut, Mid 90s, a coming-of-age movie that is as peripatetic as a leisurely skate down a palm-lined, LA byway. 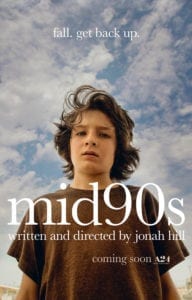 This is not to say the movie fails: in fact, I’d argue just the opposite. It’s a great success, but it’s dramatic purpose is less potent than it could be, and that’s why I think its title is merely a time stamp rather than indicative of anything in the story. Hill wants to capture the nostalgia of an era he lived in and through, and he does this marvelously despite a thin plot.

To describe the slim narrative will take less time than my internet research. A pre-teen boy, eventually nicknamed Sunburn, living in mid-1990s LA has a less than ideal home life. He’s got a single mom, and, worse, a dick for an older brother. Sunburn finds escape and the love of a new family at a local skateboard shop, where a collection of foul-mouthed rebels hang out. They induct Sunburn into their club. They teach him how to skate, how to smoke and drink, how to get women, and most importantly, how to live.

Sunburn loves his new life, though it is not without perils. His family away from family is not without dysfunction, but in his estimation it’s worth the risk to ride with it.

Among his new cohort is “4th Grade,” the kid who bears witness to all the group’s antics, rarely speaking and mostly documenting (via camcorder) events; there’s “FuckShit,” the wild man of the bunch who is self-destructive and bound to be a statistic; Ray is the most promising of them all. He lives the edgy, skate life but wants something better and is motivated to stay clean and get out. Finally, Ruben is an almost malevolent presence and probably a future jailbird.

The cast is an interesting mix of experienced, child actors and amateurs. The skate and hang out scenes especially have an improvised feel to them, from jawing in the shop to talking shit at the park to impromptu conversations with the homeless.

There’s an undeniable parallel between Mid 90s and the classic shocker Kids, which was made (wait for it) exactly in the mid-90s. Kids was the product of collaboration between Larry Clark and Harmony Korine. Mid 90s has more of a sense of humor, but the similarities are too hard to miss.

Kids featured life in New York City with plenty of skateboarding, drinking, drugs, and sex. Hill has transposed this onto Southern California, and I will not be the first or last to mention the heavy homage he has created with Mid 90s.

Lastly, Mid 90s marks an interesting career turn for Jonah Hill. He cut his chops as the stocky funny man in a number of movies from Superbad to Knocked Up to 21 Jump Street. Even when playing more serious roles in pictures such as Moneyball, The Wolf of Wall Street, or Hail, Ceasar! there was always a cuddly mirth to his tone and performances.

Now, as a would-be auteur, he has entered a much more serious phase, and I have to admit he’s acquitted himself ably. Though I’m hazarding a guess, it seems this effort is at least partly autobiographical; that is, Hill is doing what all beginning storytellers do: they tell the tales they know.

If Hill continues in this direction can he take on other subjects and stories? Scorsese evolved from Mean Streets to some of the great works of cinema. I’m not ready to put Hill in that category, but he’s made a good start, and I will watch eagerly to see where he goes next as a writer-director.

Blast Rating: 3 out of 4 stars