Nathan Fillion is no rookie. His career has spanned a number of genres and mediums, with his roles in projects such as Firefly and Castle earning him a dedicated fan following. Since Castle’s series finale in 2016, Fillion’s supporters have wondered what project would bring him back to television again. The answer: The Rookie. In the new ABC crime drama, Fillion plays John Nolan, a forty-year-old man who decides to fulfill his dream of being a police officer for the LAPD. As the oldest rookie on the force, Nolan faces unique challenges in the unpredictable world of law enforcement.

At this year’s Paleyfest event for The Rookie, Blast Magazine spoke with Fillion about his return to the small screen and his experiences working on a different kind of police project.

Blast Magazine: What was it about the role of John Nolan that convinced you to make The Rookie your next major project?

Nathan Fillion: The fact that this is actually a cultural phenomenon that we are experiencing right now. People’s lives change midway through. They are no longer required as a parent or as a breadwinner. Divorce is now the norm. Careers change. The world moves far faster. You don’t get a job at 23 and retire at 65 anymore. It’s not normal anymore. The norm is now “my company went under and I have to get a new job so I’m going to do this instead” or “I’m no longer happy doing this and I’m going to be happier doing that.” People change and switch over now. 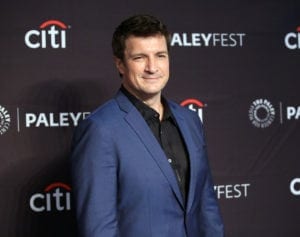 Nathan Fillion Arrives to Paleyfest (Brian To for The Paley Center)

Blast: How has working on this show changed your perspective on real-world police?

Fillion: I’ve always respected police. I’ve always thought that was a super tough job. Being closer to it in this way has really opened my eyes to just how difficult that job is, how dangerous that job is, and how much of a true calling that job is. You have to want to serve to be in that position. It’s a tremendous amount of responsibility. It’s not an easy job. In order for someone to call 911 and a police officer’s job to start, everything has to be out of control. It’s beyond handling when you need the police to come in. It also showed me just how woefully underprepared I am for an actual job as a police officer. It’s something I would never do.

Blast: You tend to bring some comedy to even your most serious roles. How do you find the balance between adding some lightheartedness to heavy moments and just being over the top?

Fillion: I think the easy answer is to ground everything in reality. Real life can be funny at times. Police officers are actual people living actual lives and that can be funny. Just ground it in reality and I think you’re safe.

Blast: In recent years, there has been an increase in the number of shows focusing on police. Why do you think that people are so interested in watching those types of programs?

Fillion: I think it is because the stakes are higher. I don’t think all of us can relate to carrying a gun around or being shot at during work. But, we can certainly relate to having a boss that doesn’t like us or having a relationship that maybe isn’t the smoothest or starting a brand new job. These are things we can relate to. I think the police work is just a way of raising the stakes.

Blast: I know you can’t give away any spoilers but do you think there is anything about the show that will surprise viewers?

Fillion: I sure hope so.

Be sure to watch The Rookie on ABC on October 16