“Sometimes I wish I was normal.” “Dude! Nobody’s normal!”

This exchange, seen in the show’s first season, beautifully illustrates the importance of a series like Atypical. The Netflix original program, which premiered last year, tells the story of Sam Gardner, a high school student on the autism spectrum, who suddenly decides that he is ready to start dating. In the show’s first season, viewers watched as Sam’s parents and sister struggled to agree on the best way to help him, while also combatting their own personal demons. Although the vast majority of Netflix subscribers are not on the autism spectrum, the show’s underlying messages about family, personal growth, and self-identity are relatable for everyone.

Prior to the premiere of the show’s second season, Blast Magazine had the opportunity to speak with three members of the Gardner family, Michael Rapaport (Doug Gardner), Keir Gilchrist (Sam Gardner), and Brigette Lundy-Paine (Casey Gardner), at Paleyfest in Beverly Hills to discuss the importance of representation on television and the challenges of working on such a ground-breaking series.

Blast Magazine: This season, Sam joins a support group where all of the members are portrayed by actors who are on the autism spectrum. Keir, how did that influence your performance in those scenes?

Keir Gilchrist (Sam): I was really nervous the first day of the peer group scenes. In some ways, I’m trying to pretend to be more like them and that’s nerve-wracking. You want to do it justice. But, I was also really excited and when we all got together, we immediately had a blast. They were all so excited to be on the show and we had so much fun. We goofed around probably more than any of the other scenes. I was just so impressed with everybody. For a lot of the kids we worked with, we talked to their parents and it was very much like with Sam, where his mom is worried that he’s never going to be able to do all of these different things. Next thing you know, they’re on their favorite TV show and killing it. Those were my favorite scenes to do this season and all of the actors came out to the screening and they really liked the first two episodes. They didn’t get to see any of their stuff because it’s later but I’m really excited to hit them up and ask them what they thought. A lot of them had done theater in the past but had never been on camera before. It was really cool to see them learn the whole process.

Blast: The Sam-Casey sibling relationship was my favorite part of the first season. In season 2, we see Casey enroll in a new school without Sam. How does their relationship change as they move further apart?

Keir Gilchrist (Sam): All of a sudden, Sam is on his own and Casey is on her own. Because of what is going on at home in terms of the affair and the things that transpire after the first season, there is a lot of tension and it actually ends up wearing on their relationship more than last season. I think that it’s pretty common for siblings to end up butting heads when things like this happen in families. 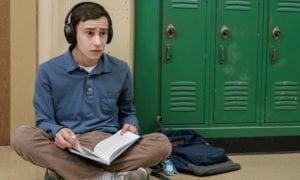 Blast: Brigette, do you think that Casey’s self-identity becomes stronger or weaker this season?

Brigette Lundy-Paine (Casey): I think it’s different. I think identity shifts wherever you are. In a way, her identity becomes stronger because she’s challenged and put in this insane environment that she has no idea how to handle herself in. It’s like putting a swan in a jungle. I think it only strengthens her identity.

Blast: All of you have worked on this show now for two seasons. What have you learned from playing members of the Gardner family?

Keir Gilchrist (Sam): I’ve learned so much. One thing I’ve learned is that I’m able to do things that I didn’t think I was capable of. I’ve never been the lead on a series before and it’s pretty incredible. I’m proud of myself that I accomplished that. My biggest takeaway is to not jump to conclusions with people and maybe take a step back to realize that everyone is different. Everyone is atypical. I love the Zahid-Sam relationship in the show because why can’t someone on the spectrum and a neurotypical person be best friends? There’s no reason why not and I hope other people take that away too.

Brigette Lundy-Paine (Casey): I think that playing Casey has helped me understand how to use my voice. Casey says whatever she wants and she understands morals in a way that I really admire. Every time that we finish shooting, I walk away thinking how I want to be a little more like Casey.

Michael Rapaport (Doug): It’s more about what I’ve learned as an actor. This character is a lot quieter than I am and has a harder time articulating his emotions than I do. That’s been a fun thing and at times, a challenging thing.

Blast: Keir, what has been the greatest challenge you’ve faced when playing Sam?

Keir Gilchrist (Sam): I think it’s the level of energy that I need to play Sam. His brain moves faster than mine. Even though my brain is similar in some ways and there is a part of me that is Sam, I have to work twice as hard to keep up with him. The energy level that requires and the amount of focus I need has been a huge challenge for me. I get to the end of a five-day week and I just can’t keep up with Sam. He’s just too smart and quick-witted. The other challenge has been consistency. I wanted to make sure that it felt like we were picking up where we left off and that Sam was the same Sam. It’s difficult over the course of 18 episodes to keep something consistent. 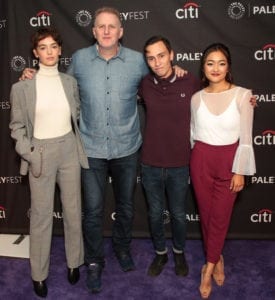 Blast: Last season ended on a high note when Sam hugged Doug at the dance. Are we going to continue to see a positive relationship from them moving forward?

Michael Rapaport (Doug): There are highs and lows with their relationship and with the family. I think they are both well-intentioned, so I think they will both work to continue to sort of figure it out.

Blast: Michael, you are a major fan of the Real Housewives series on Bravo. You’ve stated in the past who your favorite housewives are, but they are all from different cities. Do you have an overall favorite franchise?

Michael Rapaport (Doug): My favorite overall franchise would have to be New York, especially because the season just ended so it’s fresh in my head. However, when I’m engulfed in a season, whether it’s New York, New Jersey, Atlanta, or Beverly Hills, that’s usually the one I’m giving my most energy to.

Blast: On the topic of the Real Housewives of New York, what were your thoughts on the show’s recent reunion?

Michael Rapaport (Doug): It was a bloodbath. When Carole and Bethenny were going over their resume and when Ramona’s eye got cocked or whatever happened, that’s just why we watch the show. It was a mess.

Be sure to watch Atypical season 2 on Netflix!