For most people, the idea of owning a prop from a beloved movie is simply a dream. For Desi DosSantos, it’s part of his daily routine. From his first memorabilia purchase of a hoverboard from Back to the Future, DosSantos has grown his collection over the past two decades and transformed his individual hobby into a successful business. His online company, ScreenUsed, has become an industry leader in the field of original film and television production memorabilia sales. Past items sold by DosSantos include Doc’s Mind Reading Helmet from Back to the Future, Mal’s Pistol from Serenity, Luke Skywalker’s LandSpeeder from Star Wars: Episode IV – A New Hope and Dr. Egon Spengler’s Ghostbuster Uniform from Ghostbusters II.

At last weekend’s Silicon Valley Comic Con, Blast Magazine had the opportunity to speak with DosSantos about the thrills and struggles of collecting.

Blast Magazine: What inspired you to start collecting film memorabilia and what was the first item you purchased?

Desi DosSantos: Back in the 90’s, my favorite movie was Back to the Future and I wanted to own a hoverboard. I went on eBay at the time, which I would never recommend doing now, and saw the pink hoverboard that Michael J. Fox had in the film. I called the owner, thinking it couldn’t be real, and he explained to me that he had gotten it from a prop guy. He gave me all of the history on how it was acquired so I ended up buying it. I held it in my hand, watched the movie and immediately wanted another one. It just grew into this out-of-control hobby and over the years, I began to communicate with other collectors around the world. They would offer to pay me to find pieces so it then turned into a business and I’ve now been doing this for 14 years.

Blast Magazine: Is the first hoverboard your favorite item in your collection?

DosSantos: Yeah, that’s probably my favorite. I still have it. 80’s movies are kind of my thing.

Blast Magazine: What do you think it is about film memorabilia that makes people want it so much that they’re willing to spend hundreds of thousands of dollars to obtain a single item?

Blast Magazine: You’ve been in this industry for 14 years during which you have been able to find some incredibly rare and valuable items. What has been the most difficult piece for you to acquire?

DosSantos: That’s a good question. It probably was the DeLorean from Back to the Future. We had the actual car and got it from the studio. We had it for about 10 years and then sold it at auction about 4 years ago. 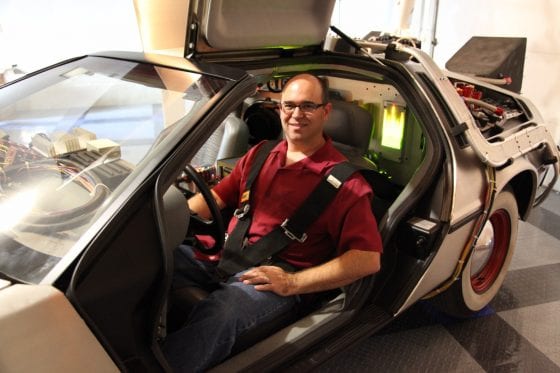 Blast Magazine: How much did it go for at auction?

Blast Magazine: Was that the most expensive thing you’ve sold?

Blast Magazine: The Star Wars: Episode IV – A New Hope Stormtrooper Helmet that is up for bid in this auction is really an amazing item. I haven’t seen many screen-used Star Wars helmets on the market. What do you think will be the final price in the auction?

DosSantos: It started at $70,000 which is extremely low for that helmet, believe it or not. We wanted to get a bunch of people involved and get them excited about bidding. We think it could go for $250,000, which is insane but those things used for sell for $10,000 – $40,000 10 years ago. Some of these iconic pieces that a lot of people like and have memories of just go up.

Blast Magazine: Have there ever been any items that you’ve acquired and sold at auction that you thought would sell for much higher than the final bid?

DosSantos: Always. It’s impossible to tell. With an auction, I need at least two people to want an item. If I have one person who wants an item, it goes cheap. If I have two people, they can battle it out a little bit. Every once in a while, an item will get a bid and be sold and then someone else will call a week later saying that they would have bid if they had known. By that point, it’s too late and the item sold for less than it could have.

Blast Magazine: On the flip side, has there ever been an item that you thought was relatively low in value that actually sold for a significant amount?

Blast Magazine: Has there ever been an item you’ve wanted for your personal collection but haven’t been able to find?

DosSantos: I block that out of my mind. The problem with this hobby is you can’t just say that you like a movie and want an item from it. It doesn’t happen that way. It has to walk up and bite you. It has to show up. That’s what we do. All the collectors around the world know who we are and we get consignments from them and from studios and we bring them here since most people don’t know what’s available. If I want Darth Vader’s helmet, I can keep that on the list but I can’t plan on it happening. I could find it next week or in 6 years. I’ve learned now not to make a list.

Blast Magazine: Do you work mostly with collectors or studios?

DosSantos: It’s a bit of both. For some of these bigger auctions, we do a lot with the consigners and individuals because they have a variety of things. If I work with a studio, a lot of times it will be all items from one production. We’re doing a Teen Wolf auction later this summer, so we’ve got props and wardrobe from the studio and it will be one big auction of Teen Wolf stuff only.

Blast Magazine: Do you think that the spread of the Internet and the ability to bid on items online has changed the landscape of the hobby?

DosSantos: Absolutely. When I first started this hobby, I was getting polaroids mailed to me from prop guys. We were looking at polaroids in envelopes to decide what to buy. With our business, we started with a website immediately. We don’t have a storefront at all and it’s 100% online. The auctions are all held online on the website. Silicon Valley Comic Con is the only time we do this in person with a big auction.

Blast Magazine: Are you interested in doing more in-person auctions at other conventions?

DosSantos: We’re located in San Jose so this makes sense for us. It’s extremely risky and expensive to carry these items around. That’s my issue. If I bring this to something like San Diego Comic Con, it’s a madhouse to have this value in a room there. It would be expensive and just scary. It’s a little calmer here so for now, we’re going to keep it local so we can bring all the cool stuff.

Following the interview, the ScreenUsed auction net $707,000, including the top item of the sale, the Stormtrooper helmet, which sold for $228,000. Be sure to check out www.screenused.com to find out more about future auctions.