Every good ghost story is like a piece of tracing paper. This excludes books and movies that are designed to scare only, with little thought or effort put in beyond inducing ‘thrills and chills.’ But with material that is elevated –let’s say A Christmas Carol, The Shining, or The Babadook—the ghosts are the tracing paper: you lay them over something else and press through to get at the underlying art. 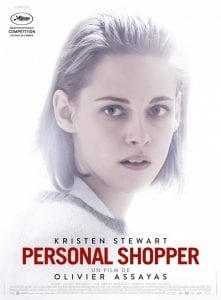 In A Christmas Carol one might interpret the subtext to be the capacity of human greed and redemption. For The Shining, we could say the ghost story is a vehicle to explore an Oedpial construct, the fear fathers have of their sons overtaking them one day. The Babadook employed a ghost to plumb a mother’s and child’s ability to process the death of the man in their life.

The movie currently under review –Personal Shopper—is also a story about grieving, but it takes on a lot more than The Babadook attempted. Indeed, Personal Shopper, at least by my reading, is an effort to graft a ghost story onto generational angst.

In the film, Kristin Stewart is an American named Maureen living in Paris. Maureen is a personal shopper for a supermodel named Kyra, but nothing about the job appeals to her. She buys the best clothing, jewelry, and accessories for Kyra but dresses herself in ratty, off-the-rack garb. Kyra has a luxurious apartment. Maureen lives in a near garret. The only thing the two share in common is body-type, which we presume is the reason for Maureen’s employment.

There’s one other distinction between Kyra and Maureen that is key: Kyra, whom we barely ever see, is a narcissist and a materialist, concerned only with the superficial things of this world, while Maureen is an artist, and, more importantly, a medium. She can connect with spirits who have passed from this life into the next, whatever or wherever that may be.

Maureen had a twin brother, and they both shared a heart defect. The brother succumbed to it, but while Maureen survives, pale and shaken in almost every scene, death hangs over her head perpetually, for the same defect could strike her down at any moment. In a sense, she already has one foot in the grave, and she and her brother made a pact: whomever was first to perish would make contact from the other side.

Essentially, there is no way out for Maureen. She is haunted wherever she goes. Haunted by her shaky grasp on this life, chased by ghosts from another. She desperately wants to be someone else but isn’t even happy when she gets to play pretend. She is the epitome of the millennial generation.

And if you didn’t appreciate the metaphor to this point, the entire movie would not be possible without modern technology. I don’t mean the equipment necessary to make the film, but integral to the story are computers and smart phones—another blessing and curse for millennials.

A movie like War Games depicted the impact computers have on our lives and society, but (like most mundane ghost tales) it never rose beyond its plot. Personal Shopper’s plot, which I won’t reveal, is almost unnecessary. The thrust of the movie is; for people like Maureen, unsmiling, world-weary 20-somethings and 30-somethings, who can’t exist without a screen at eye or arm’s length, it is almost impossible to find purpose or peace. In a place and time when a generation can live better and more happily than the kings of yore, it has no contentment.

Unlike War Games, however, which successfully carried off the many scenes and sequences centralized around a computer screen, a good chunk of Personal Shopper’s metaphor makes it hard to watch.  War Games had a different energy to it, and its campy tone allowed the viewer to overcome what could be cinematically taxing. 30 years later, in Personal Shopper, we have gone from the desktop and the big screens of the war room to smart phones and postage stamp screens. Maybe it will bother a millennial less, but I found it difficult to get through a fifteen minute sequence of story in which text messages are shot back and forth. I understand this may have been the sine qua non of the movie, but given the film’s somber tone and measured pace, not to mention the bleakness of the setting (Paris and London in winter), these portions of the story drag instead of whisking it along.

Personal Shopper will be an under the radar type of movie, playing more on the art house circuit than at the Cineplex. Can it slip these bonds and rise –like the film itself—higher in the public perception? Predictions about a movie’s success are futile, but it feels like there is too much going on in Personal Shopper to succeed fully, and the various threads do not sync the way they should or could. This does not mention the title, which conveys a romantic comedy vibe and could confuse potential audiences.

There is a small sequence toward the beginning of the movie in which Maureen investigates the work of a Swedish artist who was also a medium and a genius ahead of her time. She only wanted her paintings released 20 years after her death and was never to know the success of her art. Perhaps that is what Personal Shopper is aiming for. The truth…. The answers are probably somewhere in between—or something beyond what any of us can ever know.

Whatever the case may be, Personal Shopper is a gallant attempt to lay tracing paper over an enduring mystery and come away with a convincing interpretation.