With the launch of Rock Band back in 2007, Harmonix introduced a way for players to feel like they were part of a band and rock out to their favorite songs without needing to know how to play an instrument or read sheet music. You could get a few friends together, hook up a few special controllers, and have all-night parties in your living room all in front of your television. Weekly updates to a growing online music catalog also meant players had something new to download and play, keeping the game current throughout its many spin-offs and sequels on the Xbox 360 and PlayStation 3. With the advent of a new generation of consoles, Harmonix needed to do something to make the series relevant again and release a rhythm game friends would still want to play together. Rest assured—Rock Band 4 is off to a great start.

Now, don’t expect Rock Band 4 to come with everything previously introduced in previous games. Keyboard and Pro Guitar controller support has been scrapped, for example, in order to focus on the four main instruments that kicked off the series. If you invested time and money on these peripherals and on songs that no longer support them, you’re out of luck–but at least you can still use your old instruments to play on your new console. Whether you’re using a brand new Mad Catz set or your trusty plastic guitars, the game will become familiar to you because its core gameplay is fortunately unchanged.

Your goal when performing a song is to play all its notes as accurately as possible to achieve a high score. On guitar and bass, you’ll want to press the right note that scrolls down on the screen and then press down on the strum bar to play it. Drums are similar but require you to hit its four pads and the kick pedal when the track calls for it. Vocals on the other hand reward you with points for accurately staying on pitch. Every instrument can also enter overdrive mode to get a bigger multiplier further increasing your chances of topping your score. Foregoing the more complicated instruments introduced in its previous game, Rock Band 4 feels more like a traditional rhythm game than one trying to teach you how to play actual music. Getting rid of some its excess baggage and returning after several years removed from the spotlight doesn’t hurt either as the game shines as bright as ever. 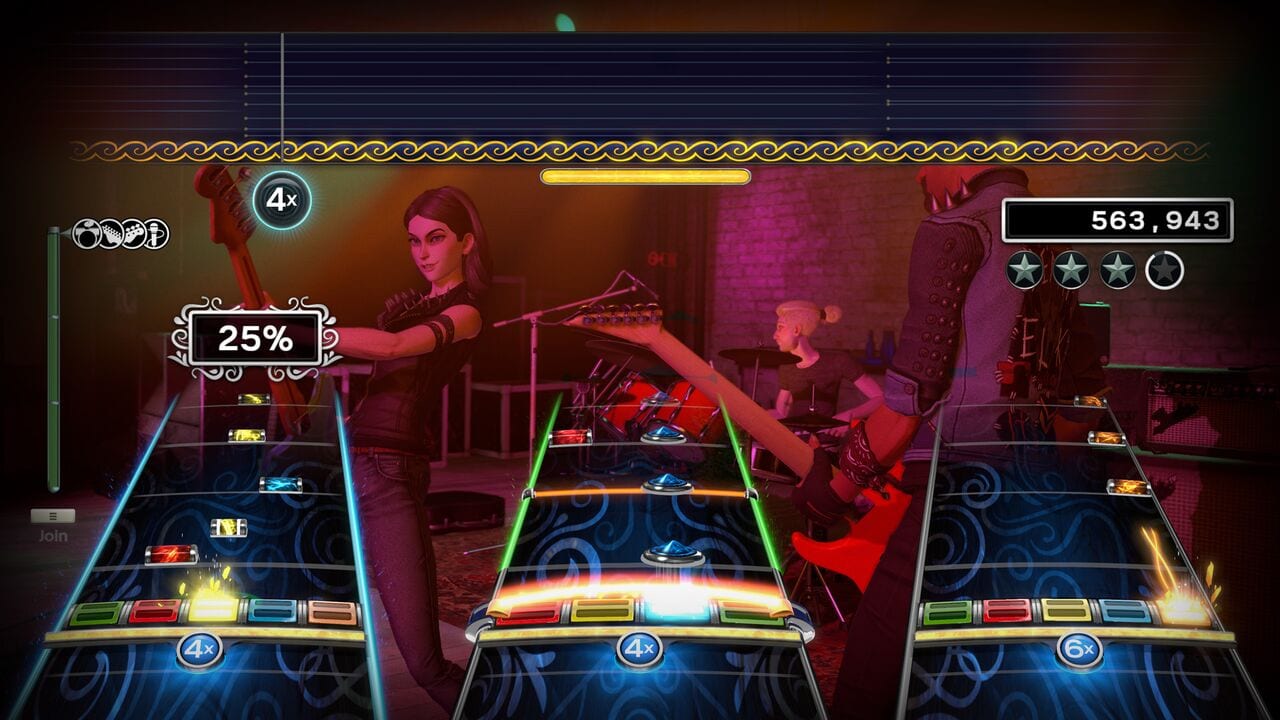 Gameplay isn’t entirely the same as it was when it first came out, of course, as Rock Band 4 comes with some great new features, that while a blast to try out, aren’t that groundbreaking but serve more to make each performance a unique experience. In the past, songs came with set notes you had to hit in order to score points during solos, but this time around you have the option to create your own melody by strumming various keys depending on the patterns that appear on the track. Freestyle guitar solos turn anyone into an instant rock star, and it’s impressive the kind of realistic tunes that you can make by just pressing random buttons on your plastic guitar. Veterans who’d rather be challenged by a song’s set pattern can always disable this feature and get scored by accurately hit notes like in the past.

The added freestyle vocals also make the game a lot more user-friendly for vocalists as you can now sing parts of a song any way you want—as long as you stay in key—and gain points for it. You can still follow and mimic a verse’s original pitch, but adding your own flair to songs allows you to customize your experience each time you play and get points for it. The same can be said for drums as you can now choose to activate overdrive by playing a randomly generated set of drum fills instead of the old freestyle method in past games. This changes things up for the drummer and allows each performance to feel spontaneous and different.

Similar to past games, Rock Band 4’s career mode follows the story of your band as they travel around the world performing shows and earning points, fans, and fashion pieces. As you play and gain stars after each performance, more shows will become available and eventually allow you to make critical decisions that can impact your band’s evolution and new set lists you can choose from. These bits of narrative are supposed to tell your band’s story, but you don’t really see much of them interacting with each other besides when performing on-stage. Gone are the various loading screens from Rock Band 3 that showcased your band leaving a show or getting food. What’s more, the custom band mates you create don’t come with as big a wardrobe or customization options as before and can’t be selected unless someone is actually playing as them, meaning you’re left with generic stand-ins when playing alone—further lessening the feeling of it being your band.

Story mode doesn’t differ much from past games, but it does come with a new voting system that lets players vote on songs when the opportunity comes on certain shows. Because the game doesn’t come with an online mode, however, the only multiplayer you’ll be playing is with friends in the same room so this voting system seems a little redundant unless you and your friends really can’t agree on a song. What do create the feeling of working together, though, are the encores or requests your band might occasionally be asked to play by fans instead of the songs you originally intended. These opportunities not only give you extra points that add to your overall score and fan presence, but do a great job of replicating playing an actual show with the crowd hollering for more.

Of course, a band is only as good as the songs they play and Rock Band 4’s soundtrack may not be biggest or most notable, but it does feature a little bit of something for everyone. As always, these songs can be a hit or miss depending on your music tastes and whether you prefer heavy metal tracks like Lightning Bolt’s “Dream Genie” that turn your fingers into mush or would rather enjoy singing the high notes in classics like The Outfield’s “Your Love”. A few obscure indie songs are also showcased, and while they may not resonate with everyone, there are bound to be a couple that will keep you playing them again and again. Van Halen, R.E.M., and Lynyrd Skynyrd are some of the known artists that were included, but it says a lot about how many songs have been released over the years when you realize their biggest hits have already appeared in past games or as DLC.

What truly makes Rock Band 4’s music selection shine, however, is that most of your previously downloaded and purchased songs are available to play. If you bought them on the same system family before, you simply have to download them again and they’ll appear on your game. It’s a hassle to download every song one by one, but the music store’s new search function makes findings songs quick and painless. Some of these older songs even come with some updated features that support both freestyle vocals and guitars making them feel a whole lot fresher than you remember them. And if this is your first Rock Band game, you’ll be overwhelmed by more than 1,700 songs currently available to download from its ever-growing catalog.

While not as genre-defining as past games, Rock Band 4 still manages to bring the series into modern times and introduces a great foundation for a future of rocking on current consoles. A new generation definitely deserves a new Rock Band and while it may seem strange reverting back to plastic instruments, a few minutes playing with Rock Band 4’s new set of instruments instantly reminds you why you fell in love with them in the first place. Newcomers not only have the chance to experience the magic for the first time, but some great additions to their winning formula and a library of hits make the introduction just as exciting. It’s a shame that a few features like online multiplayer and practice mode were left out, but Harmonix has stated that they are listening to fan requests so who knows what future updates the game has in store. What’s more, Rock Band 4 promises to be the Rock Band for this generation so, like all songs that became the hits they are today, it can only get better and bigger with time.

Rock Band 4 is available for PlayStation 4 and Xbox One. An Xbox One copy of the game was provided for the purposes of this review.