Big Gigantic, the Colorado-based electronic duo, is coming to UMass Amherst tonight as part of its Touch the Sky tour. The livetronica group is teaming up with EDM powerhouses like Skrillex, Paper Diamond and Manic Focus throughout the tour. Blast’s Bailey Knecht got a chance to chat with Big Gigantic’s drummer Jeremy Salken before the show. Be sure to catch them in Amherst with Skrillex, as the duo are headed to Pennsylvania, Michigan and then the southern states for the next few weeks.

Blast: What can we expect from you guys on this tour, and at the UMass show in particular?

Jeremy Salken: UMass obviously is gonna be little bit different because we’re with Sonny from Skrillex, so it’s gonna be like his production, and hopefully we can get him on stage with us. That show’s definitely gonna be a rager. We’ve actually been trying to do a show at the Mullins Center for a little bit cause we did Pearl Street and then we did Northampton. We’ve been trying to do an Amherst show for a while.

Salken: It’s great, I mean we collabed with him at Bonnaroo and it was super epic getting to play, getting to work with him super close and then adding all these other musicians on top of it. It was pretty awesome.

Blast: Do your West Coast shows differ at all from the East Coast ones in terms of the atmosphere or the audience?

Salken: We love to kind of rage with our Massholes, absolutely (laughs). The Northeast kind of goes hard- everybody kind of goes hard- but the Northeast does a different vibe, and it’s just maybe a little extra rowdier because they’re pent up in the city and stuff like that, so everybody goes a little bit crazier. But yeah, we love coming out to Boston, Northampton and Amherst, and kind of hitting that whole area. 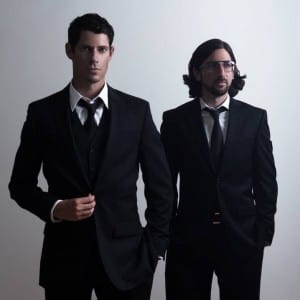 Blast: There are a ton of fan groups on Facebook for you guys. Talk a little bit about your fans, and the Big Gigantic Family and the Lil G’s in particular.

Salken: We have the Big Gigantic Family Facebook group that one of our fans started, so it’s kind of all driven by the fans, and we’re just super psyched that people are that kind of involved with what we’re doing and it kind of pushes us further. So, yeah, we have the ABGF fan base, and then we have our Lil G program, which is kind of our volunteer program that we do at our bigger shows where we kind of have kids come out and just generally make sure everybody’s having a good time at the show, make sure people are hydrated, make sure that, you know, if somebody’s not doing well, they have a place they can go, or they have some help. So they don’t feel intimidated to go to the first-aid booth, or if police are gonna do whatever, they can kind of go to our guys first and get taken care of.

Blast: How has your music style evolved in general?

Salken: I feel like our music style has definitely changed, like Dom’s producing skills as he has learned more tricks of the trade. The sound quality has gone up a lot and the songs sound fuller, they hit harder. Everything is kind of more defined, and stylistically it’s definitely evolved, you know, as all electronic music has. And it kind of keeps evolving just because the way that we are as artists and people. So you make something for a little bit, and it’s cool, and then you want to figure out a way to challenge yourself and make something new that you’ve never done before. Or you hear a style that you’re influenced by and you try and take that style and put your spin on it. It’s something that we’ve done before Big Gigantic, that’s what we used to do in jazz group and funk group and whatever we were doing trying to take those styles and take it to the next level.

Blast: How hard is it to get that perfect balance of showing off your new stuff while still playing some of your classic older songs?

Salken: It’s tough because we definitely wanna, you know, play the stuff that’s kind of new and fresh for us, but we have the fan favorites and classics that we don’t want to ignore. We love playing all of it, so we try keep it as diverse as we can with that stuff. Just recently Dom found all the masters, the audio files for a lot of older stuff. It’s actually given him a chance to kind of rework it and make it sound better and make it sound fuller so that when we play that track, the old track next to a new track, the sound quality is the same, they hit as hard, all that stuff. 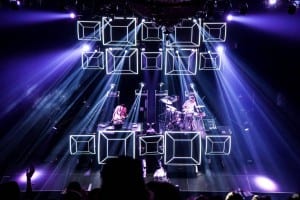 Blast: You guys have been going pretty nonstop for the past few months, and it doesn’t look like you’ll be slowing down any time soon. How do you keep grinding and keep up the energy every single night?

Salken: We’re just constantly, constantly working. We actually maybe have some time off in November and December. Right now, we try and stay busy and stay focused, keep our eye on the prize.

Blast: Talk about your philosophy behind giving away your music for free.

Salken: That’s kind of a concept that’s evolved over the last few years and, originally, it was a way just to get our music out there, you know. We wanted to put it online as quick as possible when we were starting, just have a way for people to get our music and hear us and hopefully come see us live. So that was the original concept, and as things kind of progressed with the way that music is delivered to people, we accommodated that, and we started messing around with Pandora and Spotify and iTunes. Now we just want to make sure our music is everywhere that you can possibly get music. So if you go to iTunes for music, then you can find us there. If you only use Spotify, you can find us on Spotify. All of it is kind of there, accessible when you need it and hopefully everybody comes and sees us live.

Blast: Favorite track off The Night is Young?

Salken: My favorite track is probably Shooting Stars. That one is really fun to play, it’s kind of a different vibe than we’re used to, you know. We’ve been playing it live, and it’s kind of a moment to chill out and look around and enjoy where you are. So I like that one a lot.