Every four years, the majority of Americans get to practice a high level of apathy towards the most heavily watched sporting event in history, the FIFA World Cup. Thankfully, soccer fandom has increased throughout the states in the past couple of years, mostly due to the rise of the MLS and an increase in participation by the younger generation. This gives EA a chance to score big with this break in the yearly FIFA cycle.

This year’s cup takes place in Brazil, a country which despite not creating the sport, has been gifted with some genetic dominance of the ball for the past half century. Thrown in the festive atmosphere that the country is known for and we have the ingredients for one of the most memorable parties in history. You would think that with so much to work with the folks at EA Sports would step up the in game ambiance to at least try to match the feeling of playing for your home nation. Besides some cool introductions for each arena and few new fan reactions, there is very little in the way of a revamped atmosphere. The South Africa World Cup game did a much better job at delivering a true carnival and that was four years ago. Here we are treated to fans wearing “2014” glasses and team jerseys reacting poorly to the on field action. 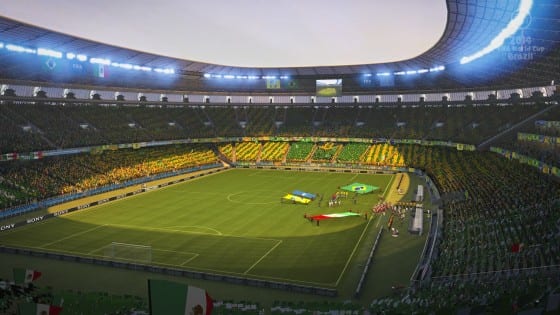 The stronger selling point is the inclusion of every country under FIFA’s jurisdiction into the game. This means you can start a World Cup journey with San Marino and, with a lot of luck and hair pulling, make it to the finals. This is always welcomed news to anyone who is a fan of a smaller team. Throw in revamped rosters for every other country and the new kits to make it, once again, the best way to play international soccer. Some nice features such as the ability to switch around the groups of the current World Cup and replay interesting qualification moments is enticing for fans who have been following over the past four years.

When you do start up your quest for glory there is an option to pick what you want to listen to as you manage your squad in the menus. The normal EA Tracks or commentators are available but you also have the choice of listening to the entertaining Men in Blazers radio show. They bring some very interesting commentary on each country and never once got old despite playing through the tournament a few dozen times. If EA wants to leave this feature for future FIFA games it would be one of the few redeeming qualities of their 2014 World Cup game. 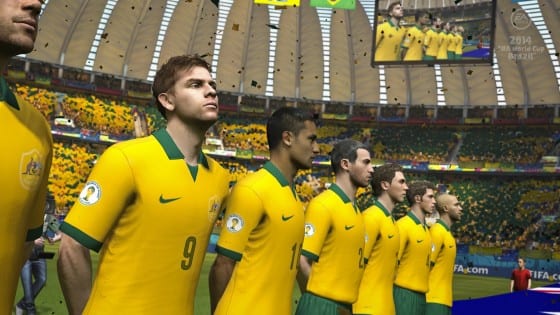 Besides this, all the other game modes are simply re-skinned from your standard FIFA game. Even the online component has its take on the much adored Seasons. You travel through the host cities in Brazil and each win gets you a step closer to Rio rather than up a division. It’s a visual gimmick.

The most alarming thing is how terribly the game lack in polish. Coming from playing FIFA 14 on the PS4 to booting up my PS3 for this, the changes in gameplay have all been for the worst. It is frustratingly difficult to score goals meaning once you reach the knockout rounds you will face a ton of penalty shootouts. Your defenders are complete idiots and unable to take the ball from anyone and it really seems that every other pass completely misses its intended target. These issues were common in FIFA 13 before any patching was used. They are unacceptable on a release one and a half steps ahead. Furthermore, the managers of AI controlled teams have reached a new level of stupidity. I have faced Brazil teams that started Neymar as a center back and Argentina teams that subbed Messi in the 24th minute for Ever Banega, who are both playing as a defensive mid. It is no surprise then that I have had finals featuring England, Cameroon, and Chile, teams that although good, are not listed as favorite by anyone to win. Throwing in visual problems such as tournament seeding getting flipped once you reach the quarter finals, players wearing the wrong numbers and the sky suddenly disappearing over Manaus and this is a game that has been rushed out of the door.

In this day of digital distribution where games are often hated for paid improvements, EA’s 2014 FIFA World Cup Brazil really stands out as a cash cow. It would have been the perfect premium DLC for the already polished FIFA 14. At its best it feels like a direct sequel to EA’s 2010 World Cup effort, at worst it is a full priced patch to FIFA 14 that takes away more than it gives. 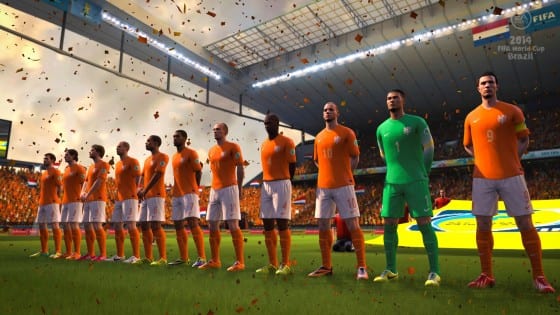