And we danced and had a really really really good time at the Macklemore & Ryan Lewis concert at the TD garden on Friday, November 8. The duo put on a show hard to forget at their first showing at The Garden.

The same cannot be said for both of the show openers. The first to go on was Big K.R.I.T, a rapper from Mississippi. Big K.R.I.T.’s performance revolved around cars. His DJ booth was shaped like the front of a Cadillac. Several of his songs were dedicated to specific parts of a car, including the tires, grill and trunk. The set mainly consisted of muffled verses and repetitive choruses. Big K.R.I.T. was not well received by the crowd that would repeat his chants back to him in a lackluster and pathetic tone.

The second opener was the more seasoned Talib Kweli, a Brooklyn rapper that has been around since the mid-90s. The crowd preferred Kweli, although most would have wished that both opening sets had been shorter. He brought out Res, an RnB singer from Philadelphia, whose vocals were that of an artist who might always remain up and coming.

Both artists did not seem to resonate because both had a much tougher rap style than Macklemore would ever have. Also for someone who consistently acknowledges the consumerism in society, rappers with songs revolving around “rotating my tires” did not seem like the fit. As a newly mainstream artist, his demographic is mostly white, party-loving college students and even parents with their small children.

These openers were an odd choice for one of the most self-aware artists who said to Rolling Stone, “A song like ‘Thrift Shop’ was safe enough for the kids. It was like, ‘This is music that my mom likes and that I can like as a teenager,’ and even though I’m cussing my ass off in the song, the fact that I’m a white guy, parents feel safe. They let their six-year-olds listen to it. I mean it’s just…it’s different. And would that success have been the same if I would have been a black dude? I think the answer is no.”

Once the lights went down and “BomBom”, Lewis’ beats-only track, played over the speakers all was forgotten. Both Macklemore and Lewis rose to the stage as 12,000 fans stood and cheered. The sow opened with “Ten Thousand Hours”, a song chronicling the number of hours of practice that has made Macklemore a true performer. 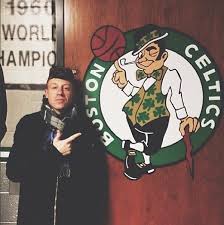 Macklemore informed the crowd that a mere two years ago, the duo was playing in venues of only a few hundred and not even making enough money to cover the gas for the Seattle commute. At several points in the show, Macklemore spoke about how important Boston is to him. Even though this line is fed to all crowds at all shows, you cannot help but to believe him. The fact that over 40 of his family members were present at the show helped to fortify that idea. Macklemore is the kind of performer that makes you feel special; he makes you feel like he drove all the way out here just for you.

Next in the set were two older songs from The Vs. EP, “Crew Cuts” and “Life is Cinema.” While most of the fans there were admittedly post-Thrift Shop fans, Macklemore’s earlier work recently gained more listeners that received the songs better than expected.

The personable performer took the time to tell stories and speak to the crowd at several points during the show. Normally it would have been considered too much talking, but he was engaging.

He tells a convincing story of arriving in Boston at 5 am and going for a walk. After admiring the cities architecture, he decided to skinny dip in the freezing cold Charles. While shriveling in the water, a couple of kids steal his clothes. When he comes up to shore an old woman approaches him. The story takes a turn when she tells him to jump on her back, and she tells him that she’s taking him to get some new pants at the Thrift Shop. The brass kicks in and the crowd roars the lyrics back at him.

The next story has a much different tone. Macklemore is candid with his fans about his struggle with drug and alcohol abuse. He talks about how his substance abuse is what stood in the way of his music. Unlike other rappers who brag about their creativity on drugs, Macklemore admits he would take the substances and just fall asleep.  After leaving rehab, he met Ryan Lewis and was finally able to grow the career that he always wanted. Together they created “Otherside”, an open and sincere song about the daily struggles of a drug abuser.

The second half of the show took a more positive spin. He celebrated the Red Sox World Series win with his baseball song “My Oh My.” He sent out positive vibes of love equality to the most accepting generation with “Same Love.” Mary Lambert was present to accompany him. He also showcased his raw talent as a rapper with a freestyle that utilized loop pedals that played back his beat boxing.

Towards the end of the show Macklemore played a game with the crowd. After singing his party anthems “Can’t Hold Us” and “White Walls,” he moved on to “Wing$”, his criticism of the Nike brand and the consumerism that we are all at fault for. He then thanked the crowd for coming then left the stage. While this usually causes people worried about parking lot traffic to begin to leave the venue, the crowd just stayed and cheered for an encore. No one wanted it to be over. It was just too good to accept that it was over.

He comes back as his flamboyant, long-haired alter ego Sir Raven Bowie to incite what he called the greatest dance party of all time with “And We Danced.” Once again there was confetti and bows. He leaves the stage once more and again the crowd just waits.

He comes back out as Macklemore to introduce each member of his unique band, which includes a brass section, a violinist and cellist, that doesn’t fit the mold of a rap concert. When the crowd starts to actually believe the concert is over, an Irish flag drops and Macklemore return once again waving another massive flag. And as if he could not think of a better place to do this, Macklemore sings “Irish Celebration.” Orange, white and green confetti falls from the ceiling and it’s a great conclusion to the show.

To everyone’s’ surprise, Macklemore comes back out once more for an encore of “Can’t Hold Us.” This is the never ending concert but in the best way possible. Macklemore challenged the norms of a rap concert with humor, sincerity, a live band and showed Boston why he did need the traditional road to success to put on one of the best tours of the year.