L’wren Scott, 49, was found dead in her New York apartment Monday at about 10 a.m. 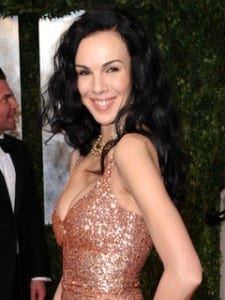 Her assistant found Scott, the long-time girlfriend of rockstar Mick Jagger, with a scarf tied around her neck hanging off a doorknob. The model-turned-designer had canceled her London Fashion Week show in February, but it appears those close to her had not suspected that Scott was suicidal.

Police have not found a note, but do not suspect foul play.

A spokeperson for Jagger said that the Rolling Stone’s frontman is “completely shocked and devastated.”

Scott began her career as a designer in 2006 with her “Little Black Dress” collection, and garnered attention when Madonna made her “Headmistress” dress famous. Prior to designing, she had modeled and worked as a stylist for many stars, including Mick Jagger, for the documentary Shine a Light. The couple had been dating since 2001.