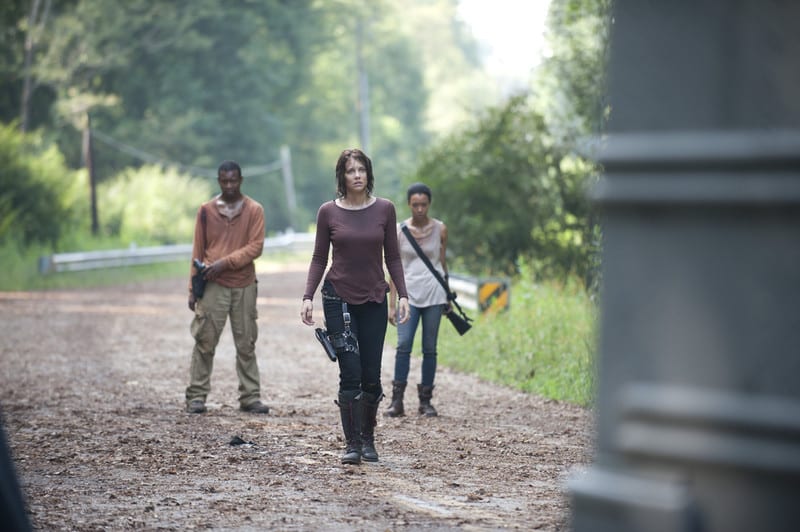 “Alone” started with another nearly-silent cold open, this one a flashback to Bob’s time on the road before he met up with the prison group. He was moping around in a haze of too-little sleep and too much alcohol, barely able to summon the effort to get himself away from walkers. Daryl and Glenn run into him on the road, and Daryl asks him Rick’s three questions. I had almost forgotten about Rick’s method for assessing potential group members to be honest, but Bob’s answers are intriguing: a dozen or more walkers, one human, and because she asked him to. Yikes, that’s a heavy answer. I wonder who the one person was to him that she asked him to kill her. We’ll probably never see Bob talk about it again, but it’s definitely an intriguing bit of backstory.

In the A-plot for “Alone,” present-day Bob is stuck in the fog with Maggie and Sasha fighting for their lives against walkers they can’t see until it’s almost too late. Bob gets bit, but oddly I wasn’t worried about him. Did anyone else feel like something about the bite was off? Before he tells a tearful Sasha that the walker only got the bandage, that is. Sasha saved the day by using up two of their precious bullets, and it’s clear they need a better plan.

A better plan presents itself to them in the form of yet another Terminus sign (How did no one ever find one of these before? They seem to be all over the place). Maggie thinks they should go, Sasha predictably thinks they should avoid it on the principle of, “If it’s too good to be true, then it’ll probably kill them.” Bob mentions that they were broadcasting over the radio back when he and the others went on that vet school run and that it’s worth a shot. Sasha’s not happy about it, but she doesn’t want to split up either, so off they go.

Once they’ve set up camp for the night, she lays out all the logical reasons they shouldn’t be following Maggie on her quest for Glenn to Bob: he’s probably dead anyway, they don’t have much ammo or supplies, they’re working with a broken compass and have no idea what Terminus will hold. All excellent points. Sasha certainly has a good head on her shoulders, a trait she and Tyreese definitely share. Her idea is to settle on a good defensible building in the first town the tracks bring them through and set up a permanent living situation there. The two of them wake up to a note in the dirt from Maggie: she’s going off to Terminus on her own and doesn’t want them to risk their lives for her. So, of course, the first thing Bob suggests is risking their lives to follow her.

Without the flashback opener, Bob’s insistence on finding Maggie wouldn’t carry nearly as much depth as it does now. He’s been alone, he has walked these roads by himself, and he’d never want to inflict that fate on someone if he could help it. Without seeing him shuffling around like a living walker in the first few minutes of the episode, his impassioned pleas to Sasha and his happiness at still being with people despite all that happened wouldn’t make as much sense for his character.

Maggie is walking the tracks on her own and killing walkers as she comes across them, partly in self-defense and partly so she can use their blood to leave messages for Glenn to meet her at Terminus on various walls. After watching Glenn fight with Abraham and the others about his quest to find Maggie, it’s so great to see her side of things, too. It’s not a one-sided passion with the two of them, despite their relationship starting out with a one-way crush. They love each other fiercely and now we get to watch them fight to find each other again. I swear, if one of them dies before they make it to each other (or worse, just as they’re finding each other) I will be almost as sad as when Hershel was murdered.

Neither Bob nor Sasha can sleep when they make camp the night after Maggie leaves them, so they take the opportunity to have a deep chat about Sasha’s fears. Well, Bob takes that opportunity, Sasha mostly doesn’t want to talk about how she’s coping with the possibility that Tyreese might be dead. Bob calls her both the toughest and the sweetest person he’s ever met, and goes for a kiss when they split up on the train tracks later that day. I had no idea Bob had a crush on her until literally this episode, so I’m a little upset at the lack of foreshadowing, but they’re just so cute together I can’t even be that mad about it.

They part ways, and Sasha spots Maggie out the window of her new building. Maggie is sleeping on the ground between walker bodies, which is super gross but super effective in terms of shielding herself. Sasha’s window falls out of its frame and breaks, bringing a whole wave of walkers down on Maggie. They fend them off together, and Maggie asks Sasha to risk her life anyway and come with her. Sasha agrees, and they catch up with Bob and head to Terminus together.

The B-plot for tonight focuses on Daryl and Beth again. They’ve grown more comfortable with each other (getting drunk and burning down a house together will do that to you), and Beth’s even learning to track and shoot the crossbow. She’s doing well until she steps on a hidden trap and injures her ankle. Daryl offers her a piggyback when she can’t limp any further, and it’s for sure the most adorable moment of the episode. Beth is definitely breaking down those big tough walls Daryl’s been putting up his whole life.

They take shelter in a funeral home of all places after stopping to have a moment for Hershel at a grave marked “loving father.” Someone’s been in this house recently; it’s clean and orderly and the walker corpses inside have been made up to look like humans again. Beth thinks it’s beautiful that someone remembered they were human and cared about giving them funerals, but I’m with Daryl—that’s pretty weird.

After they help themselves to a small dinner from this mystery person’s stash, Beth plays the piano and sings by candlelight. Daryl watches her from the shadows of the doorway for a minute, and their familiar light/dark visual dynamic that I love so much is at play again. He interrupts her to lay down in an open coffin (“Comfiest bed I’ve had in years” he says) and asks her to keep singing.

Their defenses rattle in the morning and Daryl opens the door, expecting the worst, but it’s only a one-eyed dog. Aww! We haven’t seen many animals on this show that aren’t horses. I wonder how many are even left? At any rate, the dog runs off when Daryl tries to pet him, and the whole thing is very I Am Legend (the book, not the movie), especially given that the dog never makes it back to them.

Over breakfast, Beth decides to leave a thank you note in case whoever’s been living here comes back. Daryl suggests maybe not leaving one and sticking around for a while instead, maybe even working things out with the mystery person if they ever come back. He’s never been so overt in his desire for companionship and a group before, but he has clearly always wanted it. I call that character development. Beth asks what changed his mind about the possibility of there still being good people out there, and he just looks at her significantly and gives a very Daryl grunt as a response. “Oh,” she says quietly as she realizes what we’ve all seen happening since they split off from the group together. He’s teaching her valuable survival skills, and she’s teaching him that not all is lost, that faith and hope and goodness still exist despite their bleak surroundings.

Of course, nothing good can stay for long in The Walking Dead, and when Daryl goes to get the door for the dog barking this time, a wave of zombies crashes their way through instead. I hope the dog is okay, and not dead or part of some nefarious plot to drive Daryl and Beth out of the house. The two of them split up despite Beth’s protests, and Daryl fights the walkers off with his crossbow and whatever sharp medical instruments he can find in the morgue.

He makes it out of the house alive, but Beth is nowhere to be seen. Her backpack lies abandoned on the road, and there’s a car peeling out of there at high speed. Daryl chases it for a while, but it’s in vain, and he eventually gives up at a crossroads right by some—you guessed it—railroad tracks. He never sees a sign for Terminus, though; instead, the gang from Rick’s house comes upon him just sitting there in the road. He takes a swing at the leader, Joe, when he gets too close, and ends up reluctantly along for their ride when all the other guys have him at gun/bow-point. Joe is definitely a creepy character, and his gang looks like they get up to a whole lot of sketchy business here in the apocalypse. Basically, they’re exactly the people Daryl was afraid they’d find. Extra bonus fun: the bandanna guy who was the only one to see Rick in the house is still alive and part of the group. This will be interesting if they ever run into Rick and Michonne again.

The episode ends on a shot of someone else finding a Terminus sign: Glenn. Just like Maggie thought. Obviously this is all leading up to a reunion of some sort as all the various prison folk (minus Beth and Daryl, whose paths are unknown right now) are making their way to this sanctuary. There’s only three episodes left this season, so someone better get there by the finale—I’m dying to see what’s actually waiting for them there.