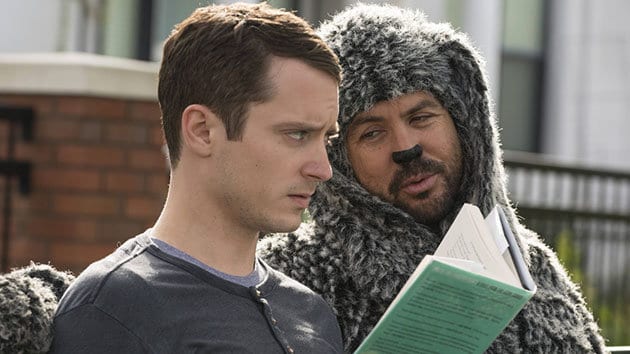 What is going on in Ryan’s head?

The two newest episodes “Suspicion” and “Sincerity” both dabble in the murky grays that come with the territory of tackling a darker comedic show. There are the funny one liners, the prat falls and the dog suit as well as the daddy problems, the troubling situations our leads get themselves into and often, Ryan’s mental instability.

The first season we were introduced to the “new Ryan,” the second season was the “inner Ryan” and now we’re seeing the Ryan whose being broken down and reassembled again—questioning his beliefs only to have them asserted by Wilfred’s manipulations.

We begin the episode with Kristin visiting Ryan with her child, Joffery, as they enjoy some much needed brother and sister bonding —until it comes to a halt. Kristin tells Ryan that she’s been dating Michael, a man she met through yoga, and really likes him, so much so that she’s allowed him to interact with Joffery. This displeases Ryan.

Strike two? Kristin is also trying to find a legal guardian and has decided that their father would be the best possible option. Ryan disagrees. Ryan sees controlling where Kristin sees responsible and stable. Ryan wants to prove to Kristin that he’s the right choice to be the legal guardian despite his dubious past record.

He gets the chance to prove it when Kristin barges in on him and Wilfred later than night enjoying some one on one bong time to have Ryan baby-sit while Kristin goes on a date with Michael.

Michael, who Ryan immediately irrationally hates. He’s quickly given credence to his hatred when Wilfred tells him he can smell other woman on Michael and due to some pressure from him gets Ryan to go on a chase to find the “other woman.”

It appears that Ryan genuinely wishes, or hopes, that he can successfully help Kristin—but for what gain? Is it to actually lighten Kristin’s load and out of his brotherly love? Is it to prove to her that he can be trustworthy therefore befitting him more than her? Or is it my favorite option, that Ryan is doing this to prove to himself that he’s a responsible adult. Can he take care of Joffery for his own sake? After months of mental fragility taking care of another human being proves competence, at least to him.

And then he goes off to take part in wild hijinks with Wilfred to prove that Michael has cheated on Kristin and results in breaking into Michael’s car.

What they find instead is a modern day brothel. Which of course they decide means that Michael has been frequenting it for sexual reasons.

All the while they have Joffery in tow.

Of all of the theories brought up by critics and fans alike there is one for some reason that’s never crossed my mind despite its likelihood: are Wilfred and Ryan the same person? Is Wilfred an alter-ego, a demon on one shoulder to the other’s angel. Is the Fight Club technique really going to pull through? In “Suspicion” Ryan spends the majority of his time trying to convince Wilfred and maybe the reason why it’s so difficult is because it’s been him all along? All of this because of Ryan’s quick concession with the car break in—he’s bothered first but quickly and with barely any second thoughts joins in.

Just some food for thought.

Kristin arrives at Ryan’s before he’s home and flies into a tirade about how she could never trust him with her baby if he can’t even handle one night. He allows to let slip that he’s been spying on Michael which makes Michael call things off with Kristin. Nothing seems to be going Ryan’s way.

However, later in an out of character moment of sincerity from Wilfred he tells Ryan that he’s acting out because he’s grown close to Kristin lately and likes being the shoulder for her to lean on: he likes having a stable relationship in his life that isn’t with a talking dog that may or may not be in his own head.

The next day he makes up with Kristin and she tells him that she’ll always be around because siblings stick. Which I might add is much more than I ever expected. Kristin is much more bearable when she’s allowed to be nice and shrill only a little bit of the time. Their mutual relationship has been one of the best surprises of the last season or two.

The episode ends with Ryan putting two and two together when Kristin tells him their dad was almost the babysitter but recommended Ryan instead. He calls his father for the first time in over a year to tell him that he knows he was setting up Ryan to fail. His dad tells him that makes him sound crazy which Ryan doesn’t dispute but follows up to say to stay out of his life. His father says he’s missed talking to him and they hang up.

If I want anything to come from this season it’s a meeting with Ryan’s father. Right now all he is is an ominous voice on the end of a phone call, but even that is a step closer to the character that seems to utterly unhinge our lead protagonist. What actually happened between the two of them? Why is there so much bitterness? Who was actually in the wrong?

“Sincerity” is a much lighter episode in terms of delving into the Ryan psyche and allows Jason Gann a chance to shine once again. Elijah Wood was allowed the moment of dark clarity in the last episode which helped ground the episode and Gann gets the slapstick physical comedy that draws the most laughs: and rightly so.

The main priority of this episode is for Ryan to impress a girl from high school that he used to have a crush on and whose affections were never returned.

This requires some dog training for Wilfred who sees domesticated dogs as losers and the owners tyrannical bastards. He says he likes Ryan because he treats him as his equal, not as his little pet he likes to trot out on occasion.

His interest though, Kim, is a doggy fanatic—you know, the kind who treat them like children with the dressing up, the baby talk and such—and is only interested in Ryan because of his supposed appreciation of Wilfred.

So Ryan fakes it which leads not only to an open mouth kiss between him and Wilfred but also to Wilfred in the aforementioned dog training camp. Wilfred believes he’s going to bring a sense of anarchy to the other dogs but instead in his eyes is demeaned and made to feel like the loner in class.

He tells as much to Ryan who tells him that if it means that much to him they won’t do another class but he has to do something for him in return which is a doggy date with him and Kim and her little dog.

Wilfred goes along with it for a while, wearing the paw booties, playing the role of domestic and allowing Ryan to treat him as even he were his inferior—up until Ryan speaks for him in a baby voice.

Wilfred calls it quits and they fight which Kim walks in on—she only seeing Ryan attacking a defenseless dog.

Wilfred promises Ryan one more class which instead is a scheme for him to let lose all of the dogs to their demise on a busy highway.

He fails though when they, being the good and trained dogs, listen to Kim when she tells them to stay.

Ryan is angry with him later until Wilfred questions why he cares at all what Kim thinks considering his need to change himself for her attention. He tells him that the last time he was himself his girlfriend ended up going insane. Wilfred, in yet another bookend moment of sincerity, tells Ryan that that wasn’t his fault; it was bound to happen to her sooner or later. He tells Ryan that it isn’t worth being in a relationship with someone who requires him to change himself. He’ll find someone who loves him for who he is eventually.

It’s bizarre that beyond the fog of weed, penis jokes, balls out carnage and wacky shenanigans the thing that sticks out the most about this show is how well the characters are written. While they’re over the top and ridiculous they aren’t one dimensional. These are multi-faceted characters who annoy each other but ultimately care for each other. Maybe having this friend, whether he be imaginary or what not, is so entirely helpful for him it’s not a problem that no one else can see him?

After these two episodes, more than ever am I excited to see how these stories pan out. I love how much I laugh at this show, I love that this is possibly the oddest television show currently on air, but more than anything I love that three seasons in it still manages to surprise me.

We have two weeks until a new episode, so there’s plenty of time to contemplate these two.