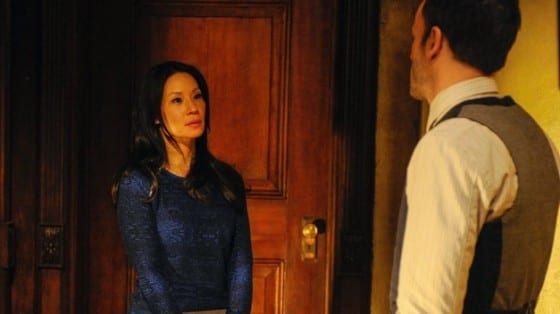 A Giant Gun, Filled with Drugs is an example of an episode where the little pieces start to not only fall into place, but also begin to elevate the material of the script. Director Guy Ferland should deservedly receive praise for this week’s installment. Having already directed episodes for shows such as Homeland and The Walking Dead it’s no surprise that he knows just the right angles and notes to get the perfect atmospheric sensibility. Such as the beginning scene.

It opens with a crime procedural trope, introducing  a young pretty girl, alone in her house, being interrupted in the middle of the night by a stranger at the door. The script plays it clever, allowing the audience to believe that the man on her doorstop is the real baddie, when it turns out that he is really a kind individual, just looking for some help. It’s when he turns away that Ferland’s directing style enhances the scene. There’s an eerie directness to the way the real villain of the week grabs the girl, knocks her out, and then stows her in a suitcase to make for easy traveling.

It’s so direct that it’s offsetting.

This, in a fine display of editing, seamlessly transitions into a scene with Sherlock at AA, Watson in tow, where he’s describing one of his wilder excursions in the criminal world which included a mongoose. When Watson chides him for not taking it seriously he tells her a lighter story seemed in order considering the group seemed particularly in dour spirits.

Once home, an unassuming Watson goes upstairs only to confront a naked man standing in the middle of her hallway.

Quickly clearing things up he tells her that he’s Rhys, an old friend of Sherlock’s. When Sherlock joins them he tells him that his daughter has been kidnapped and the kidnapper left a ransom video for him. In it he’s told that he needs to provide 2.2 million dollars in two days’ time or else his daughter is going to die. Rhys tells Sherlock that this may have briefly been a possibility, but he recently blew all of his money gambling.

They go to the daughter’s apartment to look for clues and Sherlock divulges the truth to Watson, that Rhys wasn’t just a friend from the past, but also his past drug dealer. Instantly the interest level of this episode grows because now it isn’t just about the crime and it’s solution, but it’s about the man who solves the cases and how having this link to his past life could be drastically detrimental to his progress.

Watson notes this as well, asking him if he’s going to be okay and Sherlock assures that yes, Rhys was a trigger and yes he thought of heroin and his usage but his friends are held to a higher pedestal so they’re just going to have to prepare for a trying couple of days.

It’s worth mentioning that the score of this episode was expertly done, wonderfully setting a scene that screamed intrigue.

They quickly find their trouble when a hand mark on the daughter’s door leads them to a grimy, underground club. He spots out an undercover DEA agent and goes to him to see if he’s heard anything recently about a missing girl. The man undercover roughs Sherlock up a bit to keep the show going all the while whispering to him that he knows no details on the case.

Sherlock ends up with no answers and a shiner. Tough luck.

The next morning Watson finds a disgruntled Sherlock reading the daughter’s twitter to try and find any clues about her whereabouts. Watson tries to get him to open up about how he’s feeling but like always it’s a no go and instead she goes to grab something for the bruise forming around his eye. Which leads her to finding Rhys smoking in their bathroom and proceeds to reprimand him about it and Lucy Liu is amazing in this scene, bringing out a little of the ferocity we’ve seen her display in other roles. She says that she’s sorry about his daughter, she really is, but Sherlock is her first and foremost priority and if she catches him with anything else he will have to leave.

The trio goes to stake out and watch for the girl;s step-dad after Sherlock realized that she had loaned him money. As they’re waiting Rhys (while Watson is away) implies to Sherlock that he was better at his job when he was able to get high. Jonny Lee Miller;s face of incredulity is spot on and you can’t help but start feeling a form of agitation and dislike of Rhys.

They follow the step-dad and figure out that it isn’t him but it’s enough for the real kidnapper to get a look at the fact that Sherlock and Joan are helping. He calls Rhys and tells him that because of this he’s losing time to find her and to make sure they understand each other; he’s left something at the front doorstep.

One of his daughter’s fingers. Ew.

Food remnants and burn marks lead Sherlock to believe that he can narrow in on buildings that have a certain form of heating system as well as a certain restaurant in close proximity. This and Sherlock re-watching the ransom video sends Rhys over the edge and he leaves only to return angrier than before. He tells him that the Sherlock he used to know would have already had the case figured out, that he could get a clue from the most miniscule of details.

He then drops a small bag of cocaine in front of him, to “help” him.

Sherlock’s barriers shatter and his throws Rhys into a chair, yelling at him about why he would do that to him, that he’s just as good now as he was. Watson runs downstairs to see what’s going on, but Sherlock simply leaves.

Jonny Lee Miller, I would strongly advocate that this episode be a part of either your, or the show’s, Emmy package. Miller’s performance in this week’s episode is phenomenal. When he realizes what Rhys has done his blanket disappointment and betrayal is clear on his face, masked with equal proportions rage and vulnerability. It was intense and it was beautifully played.

The next shot of Sherlock is him making a phone call. He comes back home (in a wonderfully shot scene, again giving credit to Ferland’s directing, and the lighting of the moment) and tells Rhys that he’s borrowed the money from his father despite their troubled relationship, and that he will gladly give it to him but Rhys can never show up on his doorstep again and that their friendship is officially over.

Once Sherlock leaves for the confrontation with the kidnapper he realizes that he’s been walking into an ambush and calls Watson to let her know so. She says she knows because currently her and Rhys are being held at gun point by the undercover DEA from the club, the man who’s been behind it the entire time.

The two are tied to the stairwell and Rhys, unable to just sit around, manages to cut himself loose and rush at the kidnapper to try and give Watson some time to escape. Instead, she knocks the man out and helps Rhys with his bullet wound until the ambulance gets there.

I’m actually surprised at how long it took for Watson’s character to be put into some life-threatening position. And I’m glad that now that they have they’ve done so without blaming it on some form of incompetence on her part and without making her a damsel in distress to just give Sherlock’s character angst. Instead, she got the job done and saved someone’s life.

Rhys lives, the kidnapper is put in jail, and the daughter reunites with Rhys.

Sherlock, however, is still rattled and tells Watson as much, telling her about Rhys offering him drugs. He tells her that this is a battle he fights every single day.

Addiction isn’t a quick fix, something that is easily overcome with the right words, a few months of treatment and a mindset of wanting to press forward rather than fall behind. Television and media in general have the irresponsible tendency to either glamorize addiction or demonize those who fall into the prey of it.

How surprising is it that of all shows to tackle it with such tact and self-awareness, is Elementary?

Sherlock grappling with his past addiction and his present recovery has been one of the most interesting aspects of the show. It was alluded to in the original Sir Arthur Conan Doyle stories where when alone he would use cocaine and morphine but it was typically settled with a frown from Watson and lonely night with his syringe. It’s hinted at in the Steven Moffat British version but only momentarily and blink and you’ll miss it moments. Considering the depths of the character it’s surprising that the most recent reincarnations of the character haven’t used such a characteristic to their advantage. What this show has over the others in the time they’re allowed and how it gives them a wider berth to truly explore this side of the character which is slightly darker, slightly more dramatic, and a way to help emotionally connect a character that’s often viewed as cold and calculating with the audience.

His past with the drugs and his friendship with Watson are the highlights of a very, very strong episode. With the latter it’s beginning to feel even more authentic, more comfortable. He called her his associate and it’s a moment that after every other job he’s given her, has been earned. It’s a friendship now to root for and watch develop.

It was the best episode since “M.” and just as good with its quality and it’s acting. It’s an episode that truly put together all of its best bits and it came out successful and left me at least, and I’m sure others, wanting more.