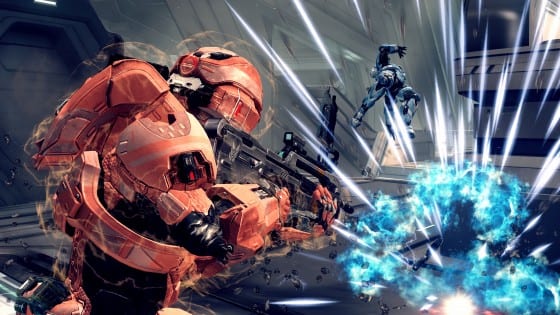 So after 5 years of anticipation, Halo 4 has finally arrived, and it’s awesome. But even though you’re used to “pwning n00bs” on a regular basis in Halo: Reach and Call of Duty, you just can’t seem to figure out why your Halo 4 win/loss ratio is still below 1. In order to correct this injustice, we’ve compiled the following list of guidelines to help improve your game. These ten basic tips will get you to the top of that post-carnage leaderboard in no time.

It may commonplace to say, but working together as a team drastically improves your chances of winning.  Even if you “almost went pro” in Halo 3, running off to do your own thing in Halo 4 without your team is a shortcut to defeat. Having the highest Kill/Death ratio at the end of the match does not ensure victory, especially if your teammates are continually dying. If you find yourself having a hard time getting your teammates to work with you, take the initiative and begin following them around instead of trying to lead. After a couple of kills, usually even silent, anonymous Xbox Live strangers begin to get the idea. Two guns are always better than one, and in the end, assist and distraction medals are just as important as kills when it comes to victory.

Know the maps and loadouts

The loadouts and multiplayer maps are new to everyone, even the most ardent Halo player, so the quicker you memorize them, the quicker your game will improve.  While unlike previous Halo titles, superweapon spawns appear on your HUD when they become available.  However, it’s still important to learn the rest of the each map in order to get around quicker than your opponent. Finding choke points and shortcuts can make all the difference, especially in CTF or Oddball matches. The best way to memorize the maps is to create your own custom games with a couple friends in order to walk around each map and learn their layouts without being shot at. Once you understand the maps, make sure to use loadouts that are conducive to each one.  Using an assault rifle and Promethean Vision is much more advantageous in a small, claustrophobic map, while a jetpack and DMR would be better in exterior maps with high vantage points. Furthermore, make sure not to call in ordinance drops mid-combat. Dying immediately after calling down an ordinance drop only helps out the enemy. 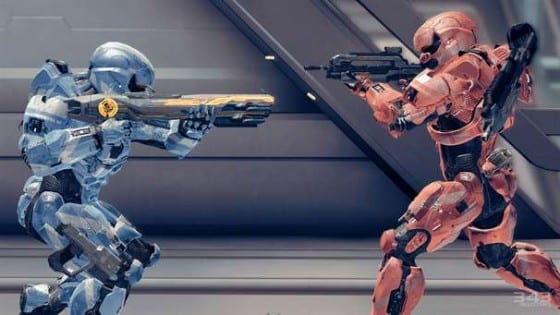 If you find yourself up against opponents using ranged weapons in an open area, attacking them head on with an assault rifle or shotgun is a good way to get yourself killed. Experiment with new weapons and learn how to use each one effectively. This will allow you to identify what weapon your opponent is wielding and give you the edge. Luring long ranged weapon users into tight areas when you have an assault rifle, or vice versa, grants you an immediate advantage. The best Halo players are able to learn from their mistakes and adapt to what’s happening on the battlefield. 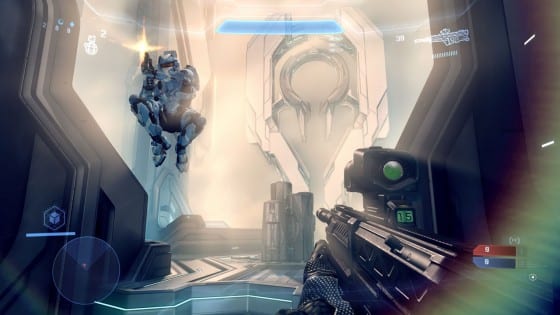 This bit of advice can be applied not just to Halo 4, but to nearly any online shooter.  Never, ever, charge blindly around a corner. Always assume that your opponent has set their crosshairs on that corner and are just waiting to blow your head off the moment you step into their line of site. Instead, turn to preemptively face the new direction before you actually walk around the corner. This way you won’t waste valuable time turning when you could be under fire.  Also, jumping around corners drastically improves your odds of survival. When watching for enemies to round a corner, most players set their sites at head or chest level.  If you’re airborne and already facing your opponent when cornering, you may actually get the first shot off.  Lastly, the new Promethean Vision ability allows you to see through walls for a short time. A split second use of this handy device can let you know whether or not you should bounce a grenade around the corner to take out a lurking, sword wielding enemy. 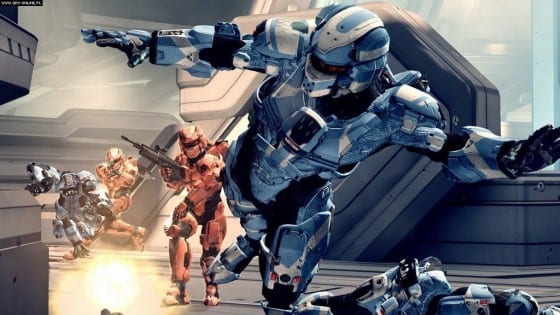 Like the previous bit of advice, this too can apply to nearly any online shooter. In games of Slayer or Oddball, it’s best to gain control of one section of a map rather than run around blindly. Controlling the highest parts of any maps not only provide the best view of the battlefield, but are also far easier to defend than lower areas. Throwing grenades or shooting rockets at someone below you is always easier than at someone standing above you. Or, if you can’t reach the high ground, choose an area with a limited amount of entry points. In Halo 4, thanks to loadouts, less emphasis is placed controlling the spawn locations of superweapons. So feel free to hunker down with your team and let the enemy come to you, especially if you have the lead.

While this bit of advice is very similar in nature to the previous tip, it’s most important to remember in games of Flood.  Instead of running around, find a place to hunker down and wait for the zombies to approach you.  The fewer and more difficult the entry points are, the better. Standing on high ground and picking off zombies from a distance, or standing by a choke point with a shotgun is a great way to increase your body count. 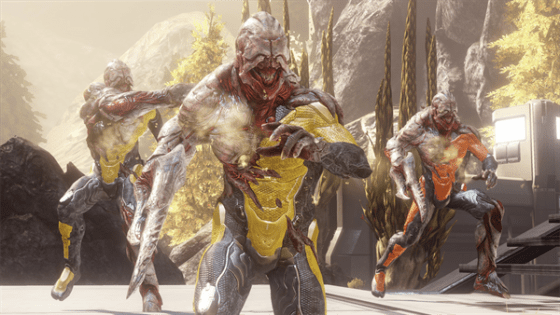 If you find yourself a member of the undead during a game of zombies, know your limitations and play accordingly. You may move quicker, but you only have a melee attack.  In most one on one situations, you are going to lose. Try to run with a couple of other zombies, but be careful not to lead; zombie pointmen always get killed first.  Let the zombies ahead of you soak up the first few rounds before you launch your own attack. The easiest way to successfully melee a shotgun wielding opponent is either while they’re distracted, or while they are cocking their shotgun in between rounds.

If used properly, ordinance drops can turn the tide of battle, regardless of game type.  When presented with an ordinance drop, make sure to choose the option that is best suited for the situation, or for your play style.  If you are assaulting a location, choose grenades or a damage multiplier. If you are defending a position, choose an overshield. While a needler is effective in close areas or corridors, it can be useless in ranged, open areas. Finally, when all else fails, choosing the SAW is rarely a bad decision. 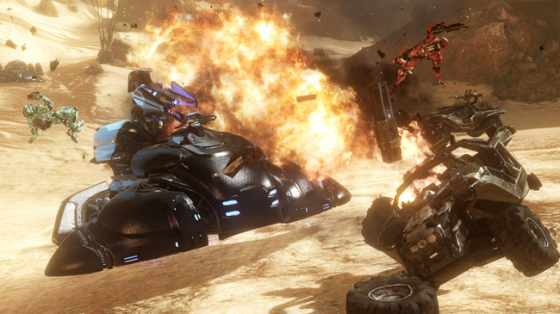 Being the operator of any vehicle has always been a coveted position in any Halo title. Hence the free-for-all rush and inevitably spiteful team killing that often occurs at the beginning of many matches.  However, getting in a vehicle is not always the best option. If you come across a used vehicle that appears to have already taken a considerable amount of damage, it’s probably best to avoid it altogether. Even at full health, jumping onto a banged up Ghost or Banshee could be a death sentence as it may one or two more shots may cause it to explode. 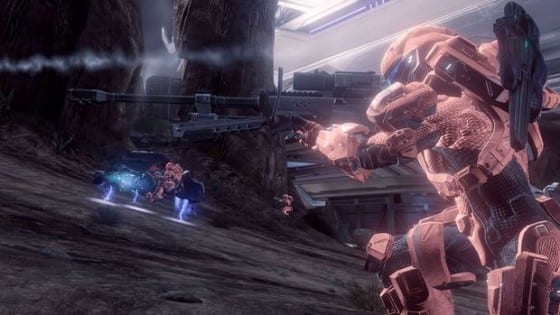 In all previous Halo titles, taking damage has always removed players from weapon zoom. This mechanic has always made ranged combat, especially sniping, more difficult when under fire. In the past, players using battle rifles or DMRs often avoid zooming altogether, as constantly zooming in and out is more difficult than just using the regular target reticle. However in Halo 4, taking fire does not automatically remove players from zoom. Using the knowledge of this seemingly small change can make a world of difference. When at medium to long range, always make sure to use a weapon’s zoom in order to score headshots. Also, when under fire from a sniper, remember that returning fire with a weaker weapon probably just makes you easier to snipe. Hopefully, armed with the knowledge of these ten tips, you’ll be doing less respawning and more ordinance dropping.  So what are you waiting for? Knowing is only half the battle; you’ve got to do the rest yourself!  Get out there are show ‘em what you’re made of, Spartan.