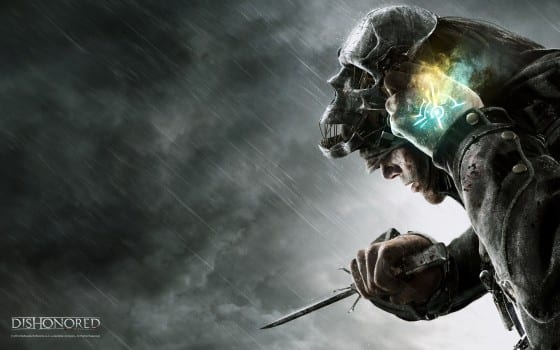 You may have noticed that this Dishonored review is a bit late than it normally would be — and for good reason.  Every time I tried to sit down and write about the new stealth, action game from Bethesda and Arkane Studios, my mind began to wander. I would wonder about my time with the game and my choices while playing. I would be haunted by thoughts of what would have happened if I went up instead of down, or if I snuck around those enemies instead of killing them in cold blood. In short — I had to go back and play everything again.

This, in essence is the true genius behind Dishonored. In an era where games are becoming more theatrical and lessening player choice, here’s a game that not only features it, but encourages it. All of this combined with incredible mechanics, unique art direction and some of the most rewarding gameplay in years make Dishonored not only of the best games of the year, but a must buy that channels some of the best games of our generation, but manages to forge an identity of its own.

Dishonored tells the story of Corvo Attano, protector to the Empress of Dunwall, a steam-punk infused city caught in between the present and the early 19th century. When the empress is assassinated and her daughter kidnapped, Corvo is framed for the crime, and of course — it’s up to him to clear his name and find the real culprits. It’s a fairly straight-forward plot, but diving deeper into the game’s expanded story through recovered audio journals and just exploring the city will result in a much deeper and more connected experience.

It’s a good thing then that Dunwall is such a joy to explore. The industrial inspired city is filled with thrilling art direction and tons of hidden pathways to explore. It was interesting to see just how varied some of the game’s sections are. Take one of the early levels in the game, you go from your central hub, the hell-hound pub, which sits on a quiet riverbed and is surrounded by lush grass and plants, to a gritty and dirty city infected with a plague — and it shows. The one complaint with the game’s production values? A lot of the NPC voices seem to have been recorded via a tin can, and even with the volume turned way up — it’s going to be tough to hear some of them.

Throughout Dishonored you’ll be given choices as to how you go about your missions — which mainly end in Corvo shuffling a few targets loose from the mortal coil. Now, a lot of games give you the choice of going in and just killing everything in sight or sneaking around and taking out your target’s via stealth — but Dishonored takes things much further as the player is presented with different paths and abilities that show just how deep of a game this truly is.

Take that same level from earlier, you’re given the target of two aristocrat brothers who happen to frequent a brothel called The Golden Cat. My first play through, I tiptoed around, waiting in the shadows, and taking out my prey — eventually finding a rather resourceful way to make their deaths look like an accident. The next, I just ran through and just offed everyone I could find in route to my targets, but it was my third time playing that I was truly shown how special Dishonored is.

This time I paid attention to the game’s secondary missions, which found me searching for a lost employee of a rebel named Slackjaw, and when I found evidence of his whereabouts, I was offered a proposition — get a journal from a patron of the Golden Cat and Slackjaw would take out my targets for me. This route may have taken a lot more sneaking around (you’re asked to get to nearly the end of the level before you have to grab the journal and then go back to the beginning to deliver it), but it definitely gives you a much deeper appreciation for just what the game does so well.

Of course, the route you take will be severely influenced by just how you’ve customized your assassin. After you learn the game’s teleportation spell known as Blink, you’re free to unlock any of the remaining magic spells at any time by. You can also choose to spend your time (and cash) unlocking and buying upgrades for your equipment. The majority of players will probably take the same route, and go with a middle of the road approach, which suits most play styles, but the level of customization available in Dishonored is simply astonishing.