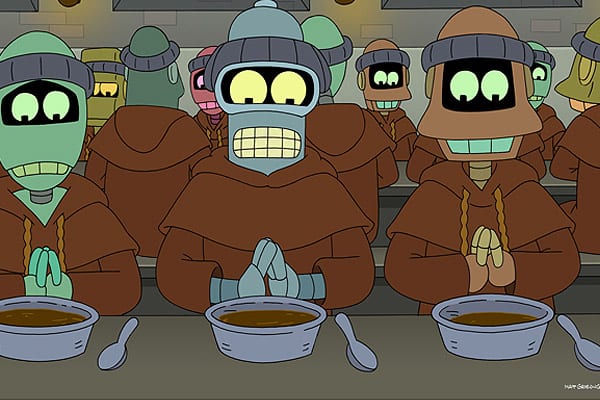 This episode begins with Bender and Fry awakening in their apartment wearing identical pairs of tighty-whitey underwear. As Fry dresses and Bender undresses, Bender is almost immediately stricken by an existential crisis while deciding whether or not to wear his “nerd glasses” today. All decisions are crucial, he says, though Fry doesn’t feel the same way. Fry’s a pretty simple guy: glasses are glasses, and whether Bender wears them or not is no big deal.

Bender ends up wearing them (though why a robot would even bother with glasses of any kind in the first place is beyond me), and is invited to a sorority party by a cute robot girl he runs into on the street. She’s mistaken him for a college student, so he heads to Columbiac University to enroll so he can attend the party. Carved into the statue at the foot of their steps is the cost: “Tuition $10,000.” What a bargain, I think to myself as I try not to picture my student loans, but for Bender it’s a ludicrous sum. The robot Mafia, conveniently lurking in the nearby shadows, offers to loan him the money at a 10,000% interest rate. Bender accepts, and makes his way to class.

Wanting to be cool despite the bright orange college sweater he’s wearing, Bender decides to sit in the back with the college “tough guys.” They invite him to join their gang, and he accepts without hesitation. In the Dean’s (named Dean Suspendington, by the way) office, Bender is treated to a mini-lecture about how he’s already fallen in with a bad crowd approximately 30 seconds into his first day at college. Bender doesn’t deny it; in fact, he hurls his orange sweater at the Dean and promptly drops out to join the gang full time.

Hanging out in an alleyway with Fabrizio and the other gang members, Bender is introduced to spark, which looks like it’s electricity that robots can take hits off and feel great. He starts a brawl over it, and Fabrizio takes him to Indelible Gang Tattoos to get, well, an indelible gang tattoo and join for life.

Before the tattoo artist can get started on the purple dinosaur Bender has requested on his face, the rival gang pulls up and starts shooting. Bender ducks for cover, but Fabrizio is not so lucky: he ends up a shuddering heap of metal on the floor, riddled with laser holes and leaking oil. Bender carries him back to the alleyway almost reverently, but then unceremoniously dumps him beneath the dumpster as a burial. Always the caring soul, that Bender.

Desperate for another hit of spark, Bender resorts to allowing himself to be bought for a night to do weird things with a gold-plated robot in a limousine. He earns a whole five dollars for whatever the rich robot wanted him to do (all we’re really sure of is that it included vomiting on this “donor” bot), but that’s enough to get him a hit of spark. Or, it would be, if the robot Mafia weren’t conveniently lurking in the shadows to collect Bender’s money at all times.

This inevitably leads to another alleyway fight, and next thing we know, the gang is visiting Bender at Our Motherboard of Mercy Hospital (seriously, have I mentioned how much I love the clever signs in this show?). Bender’s had a pretty rough 24 hours, and he’s come to realize that he’s made a lot of bad decisions that got him to this point. It’s about time to make a good one for once, he says, and then promptly attempts to rob a Girl Scout cookie stand outside. They beat him up pretty good, and he’s carted off by the robot police.

Inside the Battery Park Integrated Circuit Court, Bender’s lawyer (a blue-plumed, man-sized talking bird with Foghorn Leghorn speech tendencies) argues that Bender cannot be found guilty because he is an automaton preprogrammed by software. He has no free will, therefore he makes no decisions for himself. It’s an effective argument, since Bender is pronounced not guilty, but this throws Bender into his second crisis of the episode: what’s the point of living without free will?

Back at Planet Express, Bender is lamenting the loss of his free will (though he uses it when it’s a convenient explanation for why he shouldn’t be held accountable for smashing one of the Professor’s gadgets). Bender asks the Professor if there’s some sort of way to install free will into his system. “A robot free will unit? Impossible! And even if it were possible, which it’s not, it would still be inconceivable, which it is!” I think the Professor doth protest too much, but that doesn’t come into play until later.

In the meantime, Leela, Fry, and Bender have to make a delivery to the robot home world. Leela and Fry would be killed on sight if they stepped off the spaceship, so Bender has to deliver the package. Thoroughly depressed, Bender mopes off across the planet to think things over, leaving Fry and Leela behind in the spaceship.

Bender eventually comes upon the Order of the Binary Singularity, a community of robot monks, as they’re holding mass. The Abbott is reading from the “Whole eBook” (get it?), but takes time out to talk to Bender about the church. They’ve found peace in their inner conflicts about lacking free will by embracing the routines and the rituals. That sounds good to Bender, who joins up right away.

The monks do everything (wake up, eat, perform chores) in a perfectly synchronized manner. One of my favorite visuals is all of the monks winding clockwork gears in a setting that looks like that M.C. Escher painting of the infinite stairs. This life isn’t for Bender, though; once the Abbott opens his mind (literally, he opens a panel in Bender’s forehead) and he learns there’s a slot for a free will unit, he bolts out of the church to find it.

Fry, meanwhile, is crossing Bender’s name off their apartment door, and crossing the “and robbed” part off their warning sign to trespassers. He says he misses Bender being in the apartment despite Leela’s presence in the bed beside him. Sure enough, Bender crashes through the window in a stained-glass spaceship a few moments later, and he needs their help in planning and executing the theft of a free will unit from Momco (his manufacturer).

Bender says he can’t plan the crime because it’s not in his programming, but he ends up making all the necessary decisions as they sneak into the company anyway. They’re in the midst of searching the Research and Development room when Mom herself spins around in her “surprise chair.” She tells Bender that the free will unit was just a crazy idea that the Professor had back when they worked together (and back when the Professor had hair!). She says he never got it right, but Bender doesn’t quite believe her, considering the next thing he does is show up at the Professor’s lab, laser gun in hand.

He can’t actually hurt the Professor because he was programmed not to, but he threatens him into giving up the location of the free will unit anyway. It was hiding inside a toy version of Bender all these years, and the Professor inserts it into the real Bender’s head. He says because of the quantum mechanics of the device, there’s no way to know which way is on and which is off on the unit. For a second, this was shaping up to be some kind of Big Lesson for Bender about having free will all along, but Bender flips the switch and can shoot his laser gun at the Professor no problem (well, once the safety’s off). Bender is brought back into court for that, and he is triumphantly dragged away by the bailiffs, guilty as charged.

This was the first Bender-centric episode that I’ve experienced in my short time as a Futurama viewer, and all told, it turned out to be more enjoyable than I would have thought. Bender is funny, but he’s pretty abrasive, and while I get that that’s his character, I wasn’t sure at first how I felt about spending a whole 22 minutes focused on him. I was pleasantly surprised, however, as this turned out to be one of the wittier and more amusing episodes I’ve seen to date.

Favorite Lines From “Free Will Hunting”

Mom: “Did you find everything you were burgling for?”

Bender: “Thanks to you, I went on a soul-searching journey. I hate those!”