Ambitious is a good word to describe Heroes of Ruin. When I first previewed the game, a member of n-Space’s design team was there to tell me all about the long list of firsts it would be bringing to Nintendo’s handheld such as voice chat and drop-in-drop-out online co-op, features we have yet to see fully implemented in any current 3DS game. Having spent many hours with the game, I’m happy to say Heroes of Ruin lives up to its promises, even if it does lack in other departments.

Heroes of Ruin may introduce new features not seen in a 3DS game before, but the game is simply just another dungeon crawler. Its events take place in the land of Veil where one of its rulers has fallen victim to a sleeping curse. Having drifted ashore the capital city of Nexus, your hero takes on the task of finding the root of the problem, restoring peace and completing a few side-quests along the way. It’s a very generic storyline, but it serves to give the game a foundation on which to base all quests on. Missions will take you to different regions in Veil such as flooded caverns, snowy mountains, and even a distorted dimension. Once you finish exploring an area, you’ll be brought back to the city to freshen up and set sail once more. It’s a repetitive process and tends to drag after a few hours of dungeon-crawling. 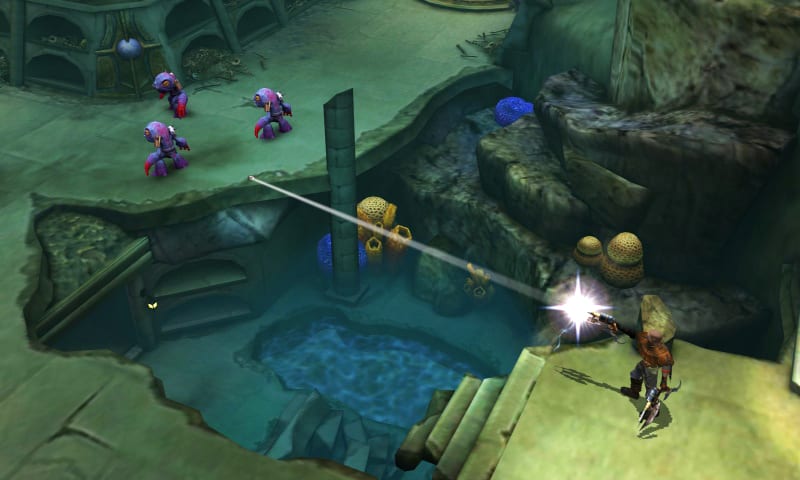 Combat, too, seems to be sluggish and doesn’t feel as smooth as I had hoped. You can choose one of four classes when you start your adventure – the all-around Vindicator, the long-ranged Gunslinger, the spell-casting Alchitect, and the ruthless Savage. Each one plays differently and learns unique abilities that fit their archetypal roles. The problem, however, lies in how simple combat seems to behave once you decide to pick a fight with one of the many enemies in the game. Your moves won’t flow into one other, and when you roll to dodge an attack, your character will block if you keep holding the roll button down for too long. Also, because the game is played from an isometric perspective, sometimes you won’t be able to see an enemy approach you until it’s too late. This gets annoying when long-ranged monsters are shooting you from areas you can’t even see on your screen.

Fortunately, the game’s biggest draw is its loot system that will keep treasure-seekers coming back for more. With over 80,000 items to discover, plundering can turn into quite a lengthy experience. Standing over a dropped item gives you a brief description of its stats and informs you whether it’s worth picking up, equipping, or quick-selling . Considering how much loot you get in each dungeon, being able to sell your items on the spot is a godsend for those of us who like to hoard items until it’s too late. Most enemies drop items, but the real treasures lie deep within dungeons and are rewarded to you for completing various side-quest that include fetching materials, rescuing people, or defeating monsters.

We’ve seen all this from games in the past, but what brought me back to the many dungeons was my dedication to my character’s progress. Each time your character levels up, you get to assign up to three points to one of his or her stats including attack, health, and ability/magic points. Your characters also get access to skill trees that you can customize with points each time you level up. Not only can you customize your character’s appearance from the start, but these leveling up features complete with the plethora of gear accessible in the game let you build completely unique characters.

It also felt good taking my snazzy characters online for the world to see. Heroes of Ruin has both wireless and online co-op that lets you play through the entire game with up to three other players. You can’t play the game offline and then decide to invite some friends over for online co-op though. Before you start playing, you need to choose what type of game mode you want to play; otherwise you’ll need to exit to the title screen and switch modes. Going online is a bit of a hassle, especially if you get disconnected from your teammates or if you accidentally close the handheld, but the online integration is a fun addition that opens up a whole new level of play on the 3DS. Having one character from each class helps you dish out different attacks during combat, but I didn’t really notice much of a difference in comparison to playing solo.

The added voice chat is optional and it the sound may not be that great, but it’s great to see it even offered in the first place. You can use the voice chat to discuss loot allotment, but if players are too shy to talk it out, items can be sold from one player to the other as well. Additionally, Nexus offers a Trader’s Network where you can offer up your items for sale with players via StreetPass. The next time you bump into someone, you can browse the items they’ve sold and purchase them for yourself. Loot is an essential part of the gameplay in Heroes of Ruin, and without them the game would just fall flat.

Visually, the game looks dull and the graphics aren’t anything to rave about; the character models also look blocky and muddled even. Turn up the 3D slider, and much of these imperfections will literally pop out at you. The town of Nexus too, despite being a hub, doesn’t live up to its definition of what a hub should be. Citizens just stand around and wait for you to talk to them and respond with generic Hellos and Goodbyes when you finish tapping their conversation choices. Only the quest givers are worth speaking to since the rest of the population has nothing important to say. It’s a shame too considering how much opportunity there was to give the game some personality. Some cut-scenes are completely voiced, though, and do a good job at drawing you into the events in the story, even if they are a bit mundane to begin with. 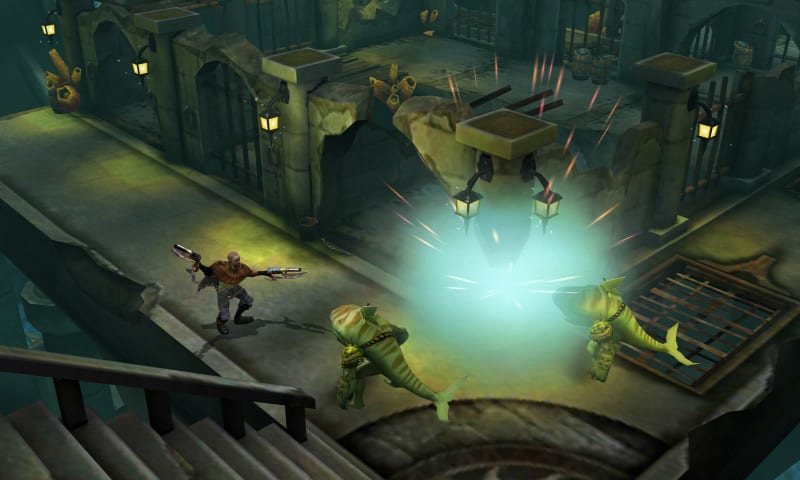 After you finish with the game’s six hour campaign, what awaits you is a whole new slew of endless side-quests and even more items to collect. The developer is also releasing daily and weekly challenges that reward players for accomplishing certain tasks. The prize: even more gear and trinkets of course. The good thing about loot in this game is that it’s actually useful and the amount of it in existence just makes you want to collect it all. Despite the mediocre graphics, it’s a good feeling to see your character change his appearance when you equip a cool-looking chest piece on him.

When it comes down to it, Heroes of Ruin achieves what it sets out to do in terms of online ingenuity without wowing us too much with the game itself. It’s not great, but it’s not bad either and you can’t compare it to any other game on the 3DS as of yet. For now, this RPG is there to whet our appetites for future titles that will follow in its footsteps. Heroes of Ruin is a pioneer on the handheld, and despite treading through uncharted territory, it manages to take us to a good place.