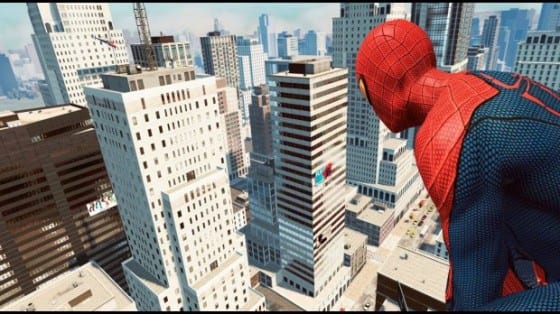 Part of me didn’t even want to play The Amazing Spider-Man. Sure, it brought back the cool free-roam web-swinging that hasn’t been seen since 2004’s Spider-Man 2 game, but I’ve been playing through Arkham City a lot lately and it’s hard to imagine any superhero game living up to what Rocksteady did with the World’s Greatest Detective.

Does The Amazing Spider-Man? Nope — but it does a damn good job trying to, and it does so by both emulating what’s come before it and creating an identity all its own. Amazing Spider-Man is not a great game, but through all its flaws, you’re sure to have a fun time regardless.

While it is set in the same universe as the upcoming Amazing Spider-Man movie, the game actually doesn’t have much to do with its big screen brother. Set after the events of the film, Amazing tells a sort of epilogue and deals with what happens after the credits roll. Dr. Conners has been imprisioned and Spidey and Gwen Stacy break into Oscorp to find that the Lizard was the least of the city’s worries, and the corporation is working on new, more vile creatures like The Rhino and the Scorpion.

Developed by: Beenox
Published by: Activision
Genre: Action
Platform: Xbox 360, PS3, Wii, 3DS, PC
Play it if: You want to feel like Spider-Man
Skip it if: You get annoyed at small inconveniences.
[rating:2.5/5]

Be warned, though the developers don’t spoil too much, there are a number of moments that reveal key plot points from the movie (one actually happens no more than ten minutes into the game itself), and since the game comes out a week before the movie, you’ve officially been warned. The story itself isn’t that revolutionary, and deals with a lot of b-listers (that’s actually being generous) but the game’s voice cast does a remarkable job giving the characters life that isn’t from the film’s actors.

Gameplay wise, The Amazing Spider-Man is quite the unique beast. It borrows heavily from the open-world web swinging of 2004’s Spider-Man 2, but also features a fair amount of linear sections that are more reminiscent of developer Bennox’s recent webhead games like Web of Shadows. Let’s be honest though — the game’s major influence isn’t even in the same universe as Peter Parker — Amazing borrows; and quite unaplogetically– from Batman: Arkham City. The exchange of Bruce Wayne for Peter Parker is one that mostly works, and with a few tweaks, somehow feels remarkably unique.

Amazing feels most like Arkham City with its combat system; much like the masterpiece that was the caped crusader’s latest game, the combat is based around rhythmic button presses. On the Xbox for instance, the X-button will be your main attack button while the Y button is used to evade and perform reversals. Where Amazing differs is that the game leverages Spidey’s acrobatic style for some pretty amazing signature moves. While Batman’s combat mostly relied on brute force , Spidey can do some impressive things with his webs; I specifically remember one fight where I was near death and countered a move by one armored thug only to web them both and knock them together. The combat in Amazing is a bit easier than that of Arkham City, but it’s never embarrassingly so.

Arkham City’s influence is also apparent in the game’s predator mode-esque stealth missions, which find Spidey web-slinging and wall-crawling around dark rooms to take out enemies one by one. It’s a mechanic that mostly works, but the camera makes it a bit more difficult than it should be.

The cool part about Spider-Man is of course his abilities to cling to walls and web-sling, but Amazing’s camera has the strange tendency to go haywire whenever you do stick to a wall, and doesn’t do well with sudden direction changes in swings. This illustrates the main difference between a game like Amazing Spider-Man and Arkham City — the later made me instantly feel like I was Batman, but it took some time to actually feel like the wall crawler.

The undeniably coolest part of Amazing Spider-Man is the return of free roaming web-slinging. New York is your playground as you swing from web to web and building to building. Much like it was in Spider-Man 2, it can be a complete rush to swing up to the tallest building and jump off only to pull a web at the last second. It’s not as much a faithful recreation as last go-round, but it still serves its purpose. One of Spidey’s newest moves makes picking your spot almost too easy – -the web rush produces a lighted shadow on the spot where you’re going to land in any given scenario.It makes webslinging feel a lot more fluid, and a lot more fun.

Amazing Spider-Man is also filled with a ton of collectibles that are sure to either make completists love it or drive them nuts trying to find them. The majority of the secret suits and comic book covers are easier to find but there are some that are going to challenge you. Let it be known Activision — I’m still waiting for my Spider-Ham costume. Now that’s DLC that I’d pay for.

The Blast Factor: The Amazing Spider-Man isn’t a bad game — it’s just not a very amazing one. There are moments of sheer joy here, like when you’re swinging through the city as the webhead, but those moments are constantly interrupted by questionable design choices and the game’s insistence on not letting you have a good camera angle at any time. You’re going to have fun with Spider-Man, but it’s flawed fun at best.