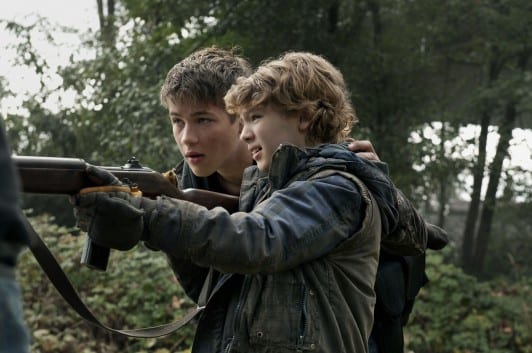 In their father’s absence, Ben takes it upon himself to teach Matt how to shoot a gun.

The season premiere of “Falling Skies” picks up three months after Tom Mason agreed to board an alien ship after one of the overlords promised him answers about his son Ben and his alien-induced affliction.  After a brief flashback to Tom’s abduction, we’re back with the main players of the human resistance force called the 2nd Massachusetts.  Pope and a few others lure a group of mechs and skitters into an alleyway where the rest of the 2nd Mass is lying in wait.  The militia brings the aliens down in a hail of gunfire, and an over-zealous Ben steps out onto the battlefield to finish off a dying skitter.  Ben’s hatred for the aliens gets the best of him, and his itchy trigger finger leads to him accidentally shooting Tom, who has finally made his way back to the 2nd Mass.

Hal, Ben, and the others bring Tom back to Anne Glass, where her and Lourdes work frantically to save his life.  While Tom recovers, he has a series of dream flashbacks to the time he spent on the alien ship.  While on board, Tom wasn’t treated so well by the aliens, who lied about telling him more about Ben’s sickness.  Instead, an alien overlord has a discussion with Tom (through the harnessed Karen) about a peace agreement.  In exchange for surrendering, Earth’s surviving humans would be rewarded with their own area to live in peace.  But history-teacher Tom recognizes this plan as being something similar to what the colonists did to the Native Americans, and therefore refuses the treaty offer.

When Tom refuses the aliens’ terms, they release him with a handful of other human prisoners.  But as the spaceship flies off, a mech guns down every survivor, leaving Tom alive.  Tom saves a young girl from a man who was trying to steal her things, and in exchange she allows him to use her motorcycle to get back to the 2nd Mass.  The alien spaceship dropped him off in Michigan, so getting back to Massachusetts doesn’t happen overnight.

Back in the present, Anne is able to remove the bullet from Tom’s side, which allows him to regain consciousness and begin catching up with her and his sons.  Though everybody is relieved to see that Tom is on the mend, Tom refuses to trust himself and warns the group that they shouldn’t either.  Tom is worried that the aliens may have done something to him that could turn him against the 2nd Mass and sabotage them from within.

Unfortunately, Tom is proven right when he suddenly starts bleeding from his eye.  When Anne takes a look into his eye, she finds an alien parasite swimming around in his eyeball.  In the nastiest, squirmiest scene so far in “Falling Skies” history, Anne uses a pair of forceps to pull the parasite out of Tom’s bleeding eyeball and place it into a glass jar.  The parasite crawls around briefly and then rolls up into a motion-less metallic ball.

Meanwhile, the 2nd Mass has problems of its own as alien forces are surrounding the unit and moving in for the kill.  The group finds a bridge that crosses a nearby river, which could lead them to safety.  But before the 2nd Mass can travel across, a pair of berserkers (alien fighter planes) arrive at the scene.  Dai is able to shoot them both down, but one crashes down across the bridge, creating a lengthy gap.

Before attempting to patch the hole in the bridge, Weaver decides to send Ben across the river (he swims it in the middle of the night) to take reconnaissance photos.  Ben discovers a pair of crashed berserkers in the woods that are emitting the high-frequency alien signal that only he can hear.  Ben can hear these signals because he was harnessed by the aliens last season.  Eventually Ben comes across an alien tower which is deploying berserkers and appears to have an antenna on the top.

When he returns to the 2nd Mass, Ben shows Weaver and the others photos of the tower.  They decide that by knocking out the antenna on top of the tower, the berserkers will be forced to retreat, which will allow them to cross the bridge safely.  The next night, Dai, Hal, Ben and Margaret sneak across the river and destroy the antenna on the tower (Dai launches a rocket into it, causing an explosion).  With the berserkers scrambled, the 2nd Mass patches up the bridge and moves everyone across it.

As the medical bus approaches the bridge, the parasite springs back to life inside of its jar.  It cuts a hole in the glass and crawls out onto the counter.  It crawls onto Lourdes, who is nearby, but it ultimately sprouts wings and flies out of the bus and into the sky.  Later, we see it return to the alien forces, where it lands on a skitter’s head and then slips into its eye.

As the medical bus crosses the patched hole in the bridge, a wheel falls through the crack and the bus gets stuck.  Pope and the remainder of the 2nd Mass arrive at the bridge, bringing a whole force of skitters and mechs behind them.  As they try to free the bus from the gap in the bridge, Tom rushes to a giant gun mounted on a pickup truck and holds off the advancing alien forces.  They free the bus and everyone heads for the safety of the other side of the bridge.

Tom holds off the aliens until the last minute, then starts running back to the 2nd’ Mass who has made it across the bridge.  The bridge has been wired with explosives, so that they can destroy it after crossing and prevent the aliens from following them.  As Tom runs across the bridge, he yells for them to blow it up with him still on it.  Jamil (a new character this season) can’t bring himself to blow the bridge while Tom is still on it, so Pope grabs the detonator and blows it up.  Everybody is shocked as they watch Tom disappear in the ensuing explosion, and it is assumed that he was killed.

But a few moments later, Ben (who almost shoots his father again) finds Tom wading ashore, very much alive.  Everyone is thrilled to see their leader alive and well, especially Hal, Matt, Ben, and Anne.  With the bridge blown and the aliens contained to the area they just left, the 2nd Mass is safe. For now.

There were a lot of things covered in the intense 2-hour season premiere of “Falling Skies,” as evidenced by the super-long recap.  But in between all of the action going on, there was also quite a bit of character development happening at the same time.  The actors, writers, and creators of “Falling Skies” have always talked about the show being more about the characters and their relationships with one another than about the alien invasion itself.  In staying true to their word, the premiere was largely about human connections, dealing with the bonds between friends and family as well as the presence of romance despite the desolate times that humanity currently faces.

The family drama going on with Tom and his three sons was a big focus in these two episodes.  It was fascinating to see the kids trying to stay strong in Tom’s absence, and then watch how his return didn’t necessarily change things for the better.  During the three months that Tom was away from the 2nd Mass, Hal had established himself as the new head of household for his two younger brothers.  Ben didn’t take well to that, and often clashed with Hal when it came to following his orders or training Matt to fight.

When Tom returns, it was interesting to see each of his sons handle it differently.  Matt is hesitant to trust him while Hal and Ben refuse to believe that he’d be capable of harming them or the 2nd Mass.  One of the most heartfelt scenes of the premiere was the conversation between Tom and Ben about love and hate.  When Tom warns Ben about being driven by his hate, it touches on that universal theme of love vs. hate and brings back memories of a certain wrinkly green creature saying that, “anger leads to hate, hate leads to suffering.”  And if “Falling Skies” has one thing in common with “Star Wars,” it must be on the right track.

Another thing the season two premiere made clear was that love is in the air.  Tom’s return to the 2nd Mass rekindles the flame between him and Anne, especially when he tells her that he came back not just for his sons, but for her.  Meanwhile, Hal seems like he’s starting up a romance of his own with former renegade Margaret.  The two are always together when they’re out in the field, and their bizarre conversation about skitter sex seemed like a thinly veiled expression of the sexual tension between them.  Then there’s the mostly random romance between Lourdes and Jamil, who joined the cast this season.  A lot must have happened between Lourdes and Jamil during those three months we missed, because all of a sudden she’s flirting with him and planting a kiss on him before the big bride-crossing scene.  Hopefully there will be some elaboration on this couple in future episodes that will explain how they got to the point that we see in the premiere.

This feels a bit sudden…

As a whole, the season premiere of “Falling Skies” was one of the show’s stronger episodes that served up equal courses of action and character drama.  The show is entertaining enough, but so far there just seems to be something keeping “Falling Skies” from being a great show.  Maybe it’s because some of the scenes between characters that are meant to be emotional and heartfelt tend to come off as a bit corny or melodramatic.  Maybe it’s the somewhat lackluster visual effects of the mechanical alien robots. The noise they comically emit makes it seem like they’re humming to themselves as they gun down humans.  Or maybe it’s the clichés that the show employs, from the one-lining renegade badass to a variety of war movie truisms.

Ultimately, “Falling Skies” is something to look forward to every Sunday night, but it’s a good thing that the summer TV schedule isn’t exactly packed with quality shows.  Otherwise, “Falling Skies” might not make the “must watch” list.