Weisberger, author of the 2003 bestseller The Devil Wears Prada that inspired the 2006 hit film of the same name,  is reportedly at work 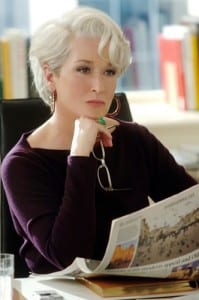 The novel is set to his shelves  in April 2013, 10 years after the release of the first. The plot picks up 8 years later, following the adventures of former magazine assistant Andrea “Andy” Sachs –  now a bridal magazine editor –  and her struggles with the “devil” – the unreasonably overbearing boss, Miranda Priestly, she thought she had left behind.

Weisberger has written three novels since The Devil Wears Prada, but this is her first return to the story that has often been considered a nod to her own experience as an assistant at Vogue (the character of Miranda is often seen as a fictionalized version of editor-in-chief Anna Wintour).

There are no reported plans for an accompanying film sequel, but fans of lead players Streep, Hathaway, Blunt, and Tucci may now have reason to hope.