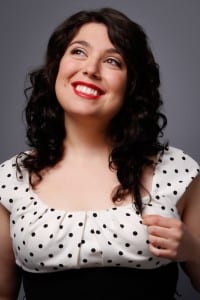 REVERE — Comedy came instinctively to Jennifer Zigrino when she was a kid.

“I was the overweight chubby girl. My only defense was to make people laugh,” she said. “People tend not to pick on you if you can make them laugh.”

The now 25-year-old recently won a Community Auditions comedy competition and a chance to perform at the Gotham Comedy Club in New York.

“It’s great. I’m really excited about it,” she said about her win.

“I always like making people laugh so it was sort of a natural progression for me,” she said.

She took a comedy class when she was a teenager and her first performance was the at the completion of the class and her teacher made her the headliner.

“I guess my teacher really liked me,” she said modestly.

Her first performance was certainly a memorable one.

“It went great. However, my dad’s friend’s wife got really drunk and started heckling everyone else. She eventually got kicked out,” she joked.

The young comedian described her comedy as “observational story telling.”

“I tell stories about my life and the funny things that happen to me,” she said.

While a date hasn’t been set yet for her Gotham Comedy Club debut, she is still excited about the opportunity.

“It’s a great comedy. There have been so many famous people that have performed there,” she said.

She also feels this is the right step for her comedy career.

“I think this is the right direction for breaking into New York. All you need is for one person to see you and everything can change,” she said.

Zigrino would eventually like to move to Los Angeles and be doing sketch comedy as well as starring in some independent films.

“Saturday Night Live is the ultimate dream,” she said.

When she is not performing, she works as Boston Freedom Trail tour guide and sells her own line of jewelry.

“I do a little bit of everything,” she said.

Zigrino moved to Revere after her parents divorce and credits the city for being an inspiration.