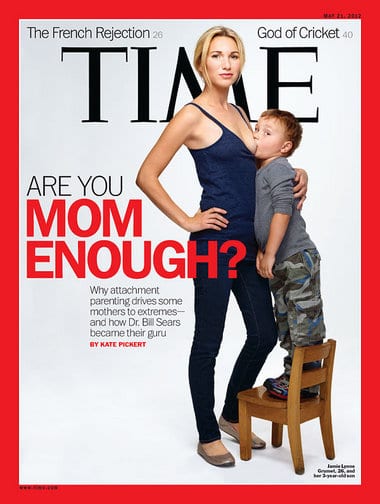 There’s been quite an uproar over the recent Time Magazine cover story, picturing Jamie Lynn Grumet, a 26-year-old mother, and her 3-year-old breastfeeding son. The cover photo shows Grumet standing proudly, arm on hip, while her son contentedly latches on to her nipple, gazing curiously over to the camera. The article also introduces us to three other mothers who are part of a growing group of women dedicated to a child-rearing philosophy known as “attachment parenting,” a term coined by Dr. Bill Sears. Through his work and his many books on the subject, Sears has inspired hundreds of thousands of women across the country to subscribe to this philosophy, which is characterized by extended breast-feeding, co-sleeping and wearing your baby in a sling across your body. The goal of which is to raise confident, healthy, secure kids.

My first thought was gee, that length of breastfeeding does seem a bit extreme. (I had no problem with the cover image.) But as I spent some more time thinking about it, I arrived at the conclusion that there really is no right or wrong on this issue. This is a decision that is unique for every family. If a woman is not breastfeeding for her own selfish needs (so, for instance, forcing the kid against his or her will), then why the heck shouldn’t she continue to nourish her child if the child hasn’t weaned herself or himself off her breast? When children are ready, they will stop – and only the mother can know when her child no longer desires her milk.

There are, of course, noted health benefits to breastfeeding, but it doesn’t seem like there is definitive evidence to say “at X months a mother is no longer passing along any added benefits to her child through her breast milk.” What doctor decided the cut-off point, anyway? Is that number arbitrary or rooted in absolute certainty? As my mom told me once when I asked how long she breastfed me: “Back then [the late-70s], the trend was to bottle feed; women didn’t even give it a second thought.” And look at me: I turned out relatively okay, didn’t I?

Conversely, we shouldn’t be condemning (something the women in the article are accused of doing) mothers who choose to stop breastfeeding at, say, six months, as there may be a confluence of factors at play: What if the mother needs to go back to work and can’t keep up her breastfeeding schedule anymore? What if she needs to go back on a certain medication that could be harmful to the baby if delivered through the breast milk?

I’m also told breastfeeding hurts – one mother I recently heard about had to stop because her child started biting her nipple. Maybe he was ready to stop, maybe he wasn’t, but it was reason enough for her to put an end to the suckling.

My final thought, though, is that if a woman’s body is still producing breast milk, there must be good reason. Our bodies aren’t some haphazard creation (sorry to all you Creationists out there), constructed willy-nilly; they are the result of millions of years of primate evolution, millions of years of incremental changes. If a woman is still lactating, wouldn’t that mean that a nursing child might still benefit from her milk? We’ve evolved this way for a reason. This is, perhaps, no coincidence.

I liken this outcry of revulsion to the debate about older mothers. Sure, there are downsides to consider (if a 50-year-old woman has a child, that child will most likely have a different upbringing than if he or she was raised by a spritely 30-year-old; there are more chances for genetic abnormalities), but if a woman is still getting her period, it’s nature’s way of saying, you can still do this. The same logic could be applied to the presence of breast milk in a woman’s body.

Why is there such disgust and outrage over these choices then?

Let’s stop admonishing mothers for the choices they make. If these choices are rooted in instinct, love, and the care of the child, we should be applauding not castigating the women who make them.