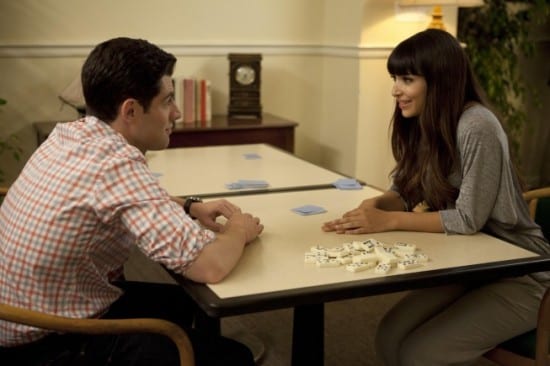 The “backslide” is a classic concept. When people’s loneliness gets the best of them they begin to regress. Some make late night calls to their most recent exes (or the abominable “drunk text”), or they might stoop so low as to booty call an even older ex who they can count on to fill their vulnerable void. Jess’ slip down the regretful slide begins whimsically with her sulking in bed to Joni Mitchell’s “The River.”

Schmidt, Winston and Cece all try to gingerly lift her sprits for the selfish reason that they don’t want to hear the GD song anymore. When Cece finally does get rid of her funk, Nick and Caroline protest when she cuts the music since Caroline just developed a kooky dance routine ripe with white-girl crumping* and pathetic Nick beat-boxing. It’s a quiet triumph of a cold open—not burst-out-laughing, but a delightful way to set the tone of shame that will ensue.

* Actually, it kind of reminded me of this gem, Sports Illustrated Swimsuit cover model Kate Upton grooving in a bikini. ENJOY!

And honestly, that’s what this episode is: a shame-filled insult fest and kick in the pants for the audience and characters alike. It’s a chance to reminisce on how far they have come together, but it’s a fragile balance they’ve achieved. The loft is full of lost and lonely souls. For Winston and Schmidt the scale has been skewed because they’ve found stability (though Winston seems TOO happy and secure). In Nick and Jess’ cases both are masking the sting of successive failures, and by episode’s end one chooses not to settle, while they other hides behind lies he tells himself that even Past Nick scoffs at.

Since the Fancyman saga, there hasn’t been many missteps. Like joke jets whizzing by overhead, tonight you could miss all the wonderful material if you are watching closely. The only missiles fired that weren’t direct hits were when they took their finger off the trigger to deliver some romantic advice that felt rushed and simplified when Jess and Nick’s wounds can’t be treated by platitudes.

Their tailspins begin at the bar where Nick’s serving Nick Miller Manhattans—straight bourbon in a plastic cup—and Caroline appears as his doting sweetheart. The whole episode seems to harken back to forever ago when Jess was off-the-wall and she was the lightning rod that shook up the loft’s status quo. Again, a fitting tribute to the strides this show has made in finding itself. What also happened back then was Nick’s devastation when Caroline ripped out his heart. Why would he want to revisit that? He needs so badly for her to be different he’s willed it true. Then again, maybe this is the optimist in me, but perhaps she has changed, thought every TV instinct tells me nuh-uh.

Schmidt and Winston see “backslider” written all over Jess and and patrol closely to ensure she doesn’t crawl back to Russell. But when a frumpily-clad Cece (her hotness must be dialed down while his genitals recover) enters the bar, Schmidt’s distracted just enough for Jess to place a longing phone call. Though it isn’t to whom you would suspect. Paul Genzlinger a.k.a Justin Long. The ugly crier himself wakes up spooning with Jess and when she sees him off Schmidt and Winston rattle off the nicknames: Mercedes Genz, Genzel Washington, The Genz of the World as We Know It, and Genz and Genzils. Jess’ body language says this was definitely a white flag waved in desperation, but her booty call comes back to bite her when Paul reveals he has a steady. The Asian Jess, Jen.

As Paul is bawling over his betrayal, Jen walks in—chunky glasses, flowery dress, wavy hair, the works—and Jess improvises well saying they were discussing the electoral college. Tears flowing, Paul whimpers “It seems so unfair. Votes don’t mean as much!” And while they’re in the clear then, Jess knows they can’t keep the secret, especially since Paul insists she’s his soulmate. So in school the next day, Jess assists Paul in coming clean. Jen ends up crying in just as ugly a fashion as Paul, but somehow he gains her forgiveness, not without Jess’ help. She levels with Jen that it sucks to be cheated on, but forgiveness is easier when you know you’re meant to be with someone. I do NOT prescribe to that theory and know from experience that the distrust will always be festering inside, but Jess gets to shine with her slapstick (the writers have found her sweet spot) by putting Paul through the emotions of a proposal. Terrible timing in my opinion, and she should reject him hard, but that wouldn’t have led Jess to her epiphany, I suppose.

The tertiary plot involving Schmidt and Cece succeeded where Nick and Jess’ didn’t, inserting sweetness where a punchline had been. Nick’s pathetic steps backward have been used brilliantly for weeks, and when the situation becomes serious it strikes me more suddenly than Schmece’s shift. Schmidt’s shattered love muscle was great for a sight gag, and here his pain is milked for more laughs with him staving off erections as best he can. While ugly-ing up Cece had mixed results, taking a trip to a nursing home works wonders. There, Cece’s grandmother threatens to let herself die if he hurts her granddaughter so that she can haunt him and he gets some tips on how to build a relationship with a beautiful woman from comedy vet Jack Carter! What wisdom does he share? Viagra. Helps him get up in the morning.

But the icing on this sugary sweet cake of a scene is when Cece looks proudly at Schmidt schmoozing with the seniors and decides she wants more. We knew the desire was buried inside her, but to see Schmidt reap the rewards is just as rewarding for us. However, it wouldn’t be a tender moment for Schmidt if it wasn’t undercut somehow. He passes out from the pain of emotional intimacy…because it gives him a massive hard-on. Her honesty with him makes him burst down there, and somehow, as vulgar as that sounds, for Schmidt that’s how he expresses his love. And if the writers hadn’t so splendidly illustrated him till now, we may not have appreciated that payoff as much. It’s strangely satisfying to see him writhe and contort his face because we know it means some kind of twisted victory.

Nick descends further into his rewind when Caroline asks Nick to move in with her. Despite the fact that Nick is only discovering now that she’s three years older than he is (she’s a impetuous 33), he halfheartedly consents: “You’re not not making sense.” Therefore, when Nick agrees to this rash decision Winston makes some weird, insanely funny bird-call, initiating a protocol that involves a DVD Nick made in case he let Caroline back into his life. The idea of a video intervention for yourself has been done by “Parks and Recreation” when Ron Swanson got back with Tammy, but this had its own signature flavor including a poem he had Schmidt stash until this day. It’s contents had me cackling until I coughed: “Shall I compare thee to a summer’s day. No, a summer’s day is not a bitch.” So simple, so effective. The visual of a caveman-looking Nick addressing his future self with a jar filled with his tears slayed me, proving that the episode had many bombs to drop and each destroyed more than the last.

Poor Winston was like a pinata this week, beaten with a barrage of insults from his roommates. The escalation of his earring proved to me though that Winston was a worthy target, not easily worn down. He gets gaudier and gaudier going from stud to hoop to full-on peacock feather and takes it all in stride. But the real victim is Jess. Without saying it blatantly, she professes her “affections” for Nick. She shares her Paul-inspired perspective: “If you really love someone, it’s simple.” Essentially, she explains what we all know, even if Nick is clicking with Caroline now, the person he deserves will be good to him from the beginning. She veers into silliness by saying she’ll shut up that Tom Waits voice in his head that tells him he’s a failure, doing a sort-of accurate impression, when he deflates her with the news that he’s moving in with Caroline.

Though the transitional phases of their relationship haven’t been executed as well as with Schmidt and Cece I was still sad for her, the emotional grab worked mostly. But Justin Long’s return feels cheap if it only offers some half-assed, Facebook status of a saying about love. Though it did add to that full circle feel, a pat on the back to this first season’s accomplishments. That self-congratulations is welcome, however, when you consider how this episode solidified New Girl as a wrecking ball ready to demolish on a nightly basis with its flurry of wit. By making the narrowing down of L.O.L.Ls a difficult task, “Backslide” earns my forgiveness, though it didn’t need to try so hard—the #backslider pop-up and the catch-your-breath ending were unnecessary—since I’ve adored these friends for a while.

– Jess: “Why is she dressed up like a women’s studies major?” Schmidt: “It’s precautionary, just until my junk heals.”

– “Caroline’s way hotter than that voice in my head who sounds like Tom Waits and tells me that I’m a failure and that I look bad in hats.”

– Schmidt: “When is it coming out?” Winston: “The earring?” Schmidt: “No, the smooth jazz album you’re dropping.”

– Schmidt: “I’m gonna miss you Winston.” Winston: “What do you mean?” Schmidt: “When your caravan moves on to the next village.”

– Nick: “How’d the audition go?” Winston: “What?” Nick: “For the Disney pirate movie. Oh and Mr. T called. He wants to punch you because that earring looks stupid.”

– “Do you wanna dress like an unsponsored professional skateboarder for the rest of your life?”

– “For someone with a soulmate, you sure did have sex with me.”

– Winston: “So you and Cece are staying away from each other?” Schmidt: “Only until my penis stops looking like a knotted wizard’s staff.”

– Awesome allusion to “Happy Endings,” the show Damon Wayans Jr. went back to instead of playing Coach (the original black guy), by Past Nick to Future Nick: “Be nice to Coach or he’ll go hang with some other white people.”