Indie up-and-comers Good Old War – Keith Goodwin (vocals, guitar, keys), Tim Arnold (drums, keys, accordion, vocals) and Dan Schwartz (guitar and vocals) – released their third album, Come Back As Rain, in March, and watched as it soured to number one on the Billboard Heatseekers Chart. Now they’re on the road, headlining a 40-city tour through the United States and Canada with opening acts The Belle Brigade and Family Of The Year. 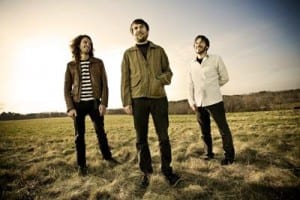 The band began its  journey back home in Pennsylvania four years ago, when Goodwin and Arnold’s original band, Days Away, went on hiatus. They picked up Schwartz, who was then a member of the band Unlikely Cowboy, and from there the band now known as Good Old War began recording their first album. They collaborated with Anthony Green, the current lead singer of Circa Survive, for a nationwide tour in 2008. Their second self-titled album, released in June 2010, hit number 150 on the Billboard 200.

In anticipation of their show at Boston’s Paradise Rock Club on April 26, Blast Magazine got the chance to check in with Schwartz before the band made an appearance on Conan on TBS last Thursday.

BLAST: This is your third album to be released since you formed the band in 2008. How as the response been from your fans so far?”

DAN SCHWARTZ: “It seems to be almost 100% positive. You sit in the studio in your own little world and when you release it, it can either get trashed or loved.  But all the things that have been negative, we’ve been able to laugh off.”

BLAST: What makes the album Come Back As Rain stand out from previous albums?

DS: “It is by far the most collaborative thing we have done. We were able to take our time. All around it was a more classic album making experience then we’ve ever had before.”

BLAST: What was the experience like for all of you when this new album hit number one on the Billboard Heatseekers Chart?

DS: “My first question really was ‘What is the Heatseekers Chart?’, because I don’t really pay attention to that stuff.  I think we’re just always surprised and when that does happen. Some high fives go around.”

BLAST: How has the tour been going for the band so far?

DS: “It’s been amazing. Every single show has had a great response. Everybody’s been coming out and singing along with us. We are very lucky.”

BLAST: What is it like touring with The Belle Brigade and Family Of The Year?

DS: “It’s so great. You pick bands, and you know that they sound good, but you hope that they’re good people as well. For us, not only do they sound great, but they are awesome people.”

BLAST: How do you, Keith and Tim work together to write your music?

DS: “Most of the time songs start with one of us bringing in an idea and then we flesh it out together.”

BLAST: In April 2011, My Own Sinking Ship was released, followed by Calling Me Names in December. What upcoming releases are you looking forward to?

DS: “I’m really looking forward to the release of ‘Amazing Eyes’. We just finished making the music video, and it looks really cool.”

Good Old War tours the US this month, with local shows in Northampton, at Pearl Street, on April 24, New York, at Bowery Ballroom April 25, and Paradise Rock Club in Boston on April 26. Purchase tickets here.