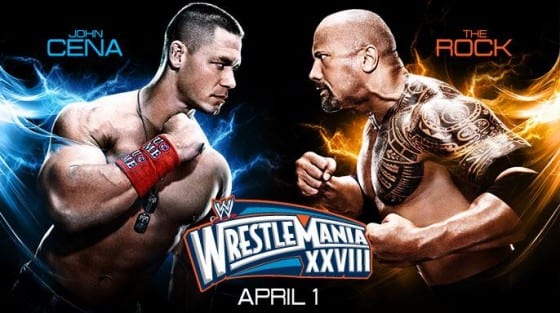 This Sunday, WWE takes over Miami for the biggest show of the year; the grandest stage of them all, the showcase of the imortals — Wrestlemania 28. The mega match on the card features the world famous Rock against current WWE Journeyman and rising star John Cena. There’s also a Hell in the Cell match with HHH taking on the Undertaker and CM Punk defending his WWE Championship against Chris Jericho among others.

But why wait for Sunday? Blast took the latest WWE game, WWE 12 (reviewed here), and simmed the entire card.  We had to be creative with some of the matches, but thanks to the the cool Community Creations feature, we were able to fill in a lot of the gaps.

When mid card mainstay Sheamus won the Royal Rumble, it left a lot of people scratching their heads, but alas — he’s in the main event, taking on surprise World Heavyweight champion Daniel Bryan in the biggest show of the year.

So how did the match go? Pretty much how you’d expect. On a few different occasions, it looked like Bryan had the Pale Wonder beat by locking in his finisher — the Labell lock, but each time, Sheamus was able to break free.  After the second time, Sheamus seemed to have gotten his second win and nailed Bryan with a Brogue kick to get the win, and the championship.

So here comes a bit of a tangent. This match reminds me of why I stopped watching Wrestling for a bit. Why are these two fighting? It’s like someone over at Titan Towers said to themselves — “Crap! Kane and Orton aren’t in matches! What do we do?” Wrestlemania has always been the night where huge matches happen, and to be fair, the card has a few of them — but this seems like the main event for a Judgement Day Pay per View. Why not have Kane take on Zack Ryder, like they’ve been promoting for months now?

This was one of the most physical matches on the card, and both men sacrificed their own bodies for the match. Orton hit two RKO’s, even one through the announce table, but Kane was still able to kick out. Similarly, Kane was able to hit the chokeslam on two different occasions, but the Viper persevered. Three seemed to be too much for Orton though, as he missed with the Punt, and was caught by the , Big Red Machine, who hit a final Chokeslam, and got the win.

Kelly Kelly and Maria Menounos VS Eve and Beth Phoenix

Yep. That’s Maria Menounos, from TV’s Extra and some other shows I don’t watch. Apparently she’s a huge WWE fan, and thus will be hitting the ring this weekend. I guess the whole thing started when Menounos had two other Divas besides Eve and Phoenix on her show.  Go Figure.

In the battle of the perfectly timed beer run, Menounos (via creation station) hits power splash off the top rope (no really) for the win.

This one is sort of like Orton VS Kane match, it feels like they’re fighting because they had nothing else to do. I’m a big believer in Cody Rhodes and his ability to be one of the company’s top stars, and it feels like he could be doing so much more at the biggest show of the year.  There were rumors that he would be taking on real life brother Golddust, but I would love to see him and former partner Ted Debiase Jr. put on a coming out party with one hell of a match.

As the story goes, Rhodes has been taunting Big Show about his terrible Wrestlemania record for weeks, and that seemed to have angered the big man, as he man handled the dashing one, Show finished off Rhodes with a big right hand to claim the Intercontinental Championship and the win.

Let’s face it — the brand split isn’t working. There’s two shows, and supposedly two different brands, but each show has wrestlers from both..it just gets confusing. Hopefully, this match, which pits teams the General Managers from both shows put together against each other, with the winner getting control of both shows is a springboard for the company to finally end this failed experiment.

Since WWE 12 won’t allow 12 man tags, we had to do singles matches in a tournament style setting to figure out the winner of this one. It came down to Santino Marella from Team Teddy and Dolph Ziggler from Team Johnny, but sadly there would be no Cobra today — Dolph Ziggler pinned Santino to give control of Raw and Smackdown to John Lauranitis.

When this match was hinted at, I was excited. Here were two of my favorite wrestlers — I had even seen Punk on several occasions as an Indie wrestler going tow to toe for the biggest prize on the biggest show, and that’s all they needed.

Then WWE started with the wonderful storylines they’re known for. See, CM Punk is Straightedge, he doesn’t drink, he doesn’t smoke and he doesn’t do drugs. So what does Jericho do? Why he uncovers facts about Punk’s past to get in his head. Punk’s dad was a drunk! Punk’s sister did drugs. ..

The talent of these two men speaks for themselves, and it did in this match, as the two stars put on one hell of a show. In desperation though, Jericho’s experience won out, as Y2J hit a powerbomb on Punk for the win and the championship.

Hell In A Cell: The Undertaker VS HHH (with special guest referee Shawn Michaels)

A lot of people were upset that there was no Money in the Bank match at this year’s show — so how does WWE compensate? How about putting three of the biggest stars of the last 20 years in a cell together. Sound good? Great.

This match is really three years in the making, resulting in HHH and HBK being unable to put an end to the Deadman’s 19-0 streak at Wresltlemania. The booking on this one is actually pretty cool, and these two should put on a great show, and the added factor of HBK being referee only makes things more interesting.

So we couldn’t have HBK as a special guest referee, but despite that, this match did not disappoint, and they had one of those classic matches you don’t forget very often. They broke the cage, they broke tables, they nearly broke each other; but in the end — Taker was able to keep his streak alive, giving HHH the last ride to get the win.

John Cena VS The Rock

After one year of talk, after some of the most unique promos and chants, the Rock and Cena finally get together in the ring this Sunday.  The Rock is in his hometown of Miami, so the cheers for his were even more deafening, but Cena would not be denied.

In a back and forth match, that saw plenty of near falls and epic moments, Cena hit the five knuckle shuffle, and then an Attitue Adjustment to the mixed reaction of the crowd for the win.

That’s it! Who do you think will win this weekend! Let us know in the comments below!