A couple of years back, the original “Shank” came forth with some interesting ideas but poor execution. Despite its efforts to craft a “Metal Slug” type action game, its unforgiving level design and frustrating control scheme led to few fans and poor reception. Developer Klei Entertainment has heard many of the complaints, and this second time around Shank is much more enjoyable to play in his endless quest for revenge.

The biggest improvement from the original game is in the controls. As expected, there is a light attack and heavy attack button coupled with a grab and grenade input. Interestingly, this 2D side-scroller took the dodge mechanics from “God of War” (mapping it to the right thumb stick) and made it fit extremely well into a world built around precise timing and careful memorization. There is also a “pounce” move that incapacitates enemies and lets you loose on them. Thrown in a counter move akin to the newer “Batman” titles and you have yourself one of the deepest yet most intuitive control schemes this year. 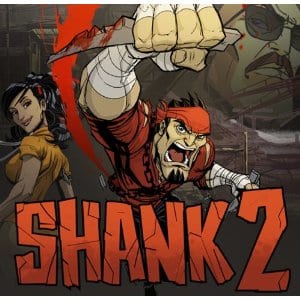 Where “Shank 2” is lacking is in the story. While the first game presented some incentive for all of the bloodlust driving the main character, this time around there is very little aside from “they are bad guys, you are not.” There are some hidden items that seek to provide some backstory to the proceedings, but overall this is as shallow as a kiddie pool.

Thankfully, the art style, which was probably the only redeeming aspect of the first game, remains untouched this time around. The entire game looks and acts like a Saturday morning cartoon. The animations are fluid and the expressions on the characters are priceless. However, the cartoonish art style allows the developers to get away with incredible levels of blood and gore, with some finishing moves involving a chainsaw to the face or limb dismemberment. All this animated bloodshed helps add some much needed character to the somewhat pointless story, saving this game from being some mindless action dribble. Frankly, some of the backdrops can be jaw-dropping, easily justifying the ten dollar price tag.

There is also a co-op survival mode that can be a riot with the right group of friends. The arcade sensibility extends to the score keeping, with completion time and number of deaths included in a final score at the end of every level. This is definitely welcome considering there are only eight levels in the whole game and they take about fifteen minutes apiece to finish, including boss fights.

Ingenuity can come in many ways. In the case of “Shank 2,” it has come in the form of fantastic gameplay that sacrifices any significant story. Once you wrap your hands around a controller and learn the ins and outs of “Shank 2’s” control scheme, you will feel like an unadulterated badass. Thrown in the comic book style violence and you have one of the best action games of the year. Few times has a game allowed you to be as awesome as the character you are portraying, and despite Shank’s Stalone level of 80’s cheese, you are sure to love every bit of it.

Blast Factor: Shank 2 is a testosterone-fueled ride helmed by one of the most gratuitous art styles in recent memory. The intense gameplay is helped by an intuitive control scheme that leaves you in complete control of a knife wielding psychopath. While it may be short lived and feature a story that makes “Commando” feel like Oscar bait, for ten dollars is a definite good time.