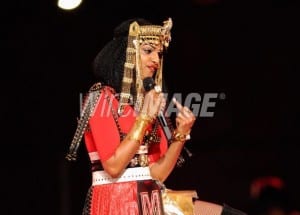 What would the Super Bowl halftime show be without a little controversy? During Madonna’s performance, guest M.I.A. made waves when she flipped off the camera at the end of her bit.

While not as shocking as Janet Jackson’s nipple being exposed on live television, the gesture garnered multiple apologies from NBC and the NFL.

“Our system was late to obscure the inappropriate gesture and we apologize to our viewers,” said NBC spokesman Christopher McCloskey, according to hollywood.com.  NFL spokesman Brian McCarthy said that M.I.A. did not indicate any such gesture in her performance during the rehearsals.

Hmm, I would have thought that M.I.A. would ask permission to flip off half the nation on a “family friendly” television network.  Go figure.